CHINA Boy, 10, gains 15kg so he can donate bone marrow to his dying father

Boy, 10, gains 15kg so he can donate bone marrow to his dying father 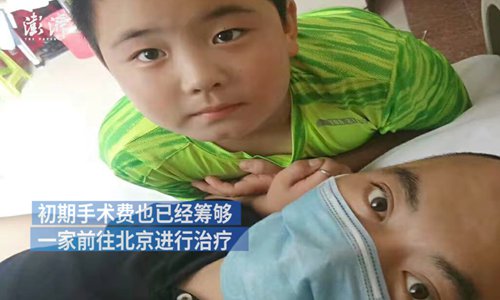 Lu Zikuan, a 10-year old boy from Xinxiang, Central China's Henan Province gains more than 15 kg in just three months to save his father from a rare blood cancer as the minimum weight requirement of a bone marrow donor is 50 kg. (Photo: GT)

A 10-year-old boy from Xinxiang, Central China's Henan Province, gained more than 15 kilograms in just three months to save his father from a rare blood cancer, as bone marrow donors are required to weigh at least 50 kilograms.

The transplant operation was successful and the father named Lu Yanheng is now out of the intensive care unit of the hospital, thepaper.cn reported on Sunday.

"I don't want to eat anymore steamed pork buns," the son, Lu Zikuan, told thepaper.cn. "I need to lose weight so I can go with my father to the amusement park."

The father was diagnosed with myelodysplastic syndrome in 2011 and has been taking medication since then, according to an earlier video posted by thepaper.cn.

Lu's condition worsened in 2018 and bone marrow transplantation became the only option to save Lu's life, according to the video report.

The doctor found that Lu and his son were a match but the young boy weighed only 30 kilograms, far less than the required 50 kilograms needed for a bone marrow transplant.

In order to save his father's life, young Lu ate five meals a day and gained 15 kilograms in just three months.

"I tried to tell him to stop as he is too young and the irregular diet has caused him gastrointestinal disorders," the father said.

"But my son just comforted me and said that all the operation needs is just a little blood,'" Lu said.

The young boy's story has touched the hearts of internet users around the country who donated millions of yuan to the Lu's.

"That man has a great son," a netizen wrote. "My son has also weighed 50 kilograms, but he got there only because he's a glutton."