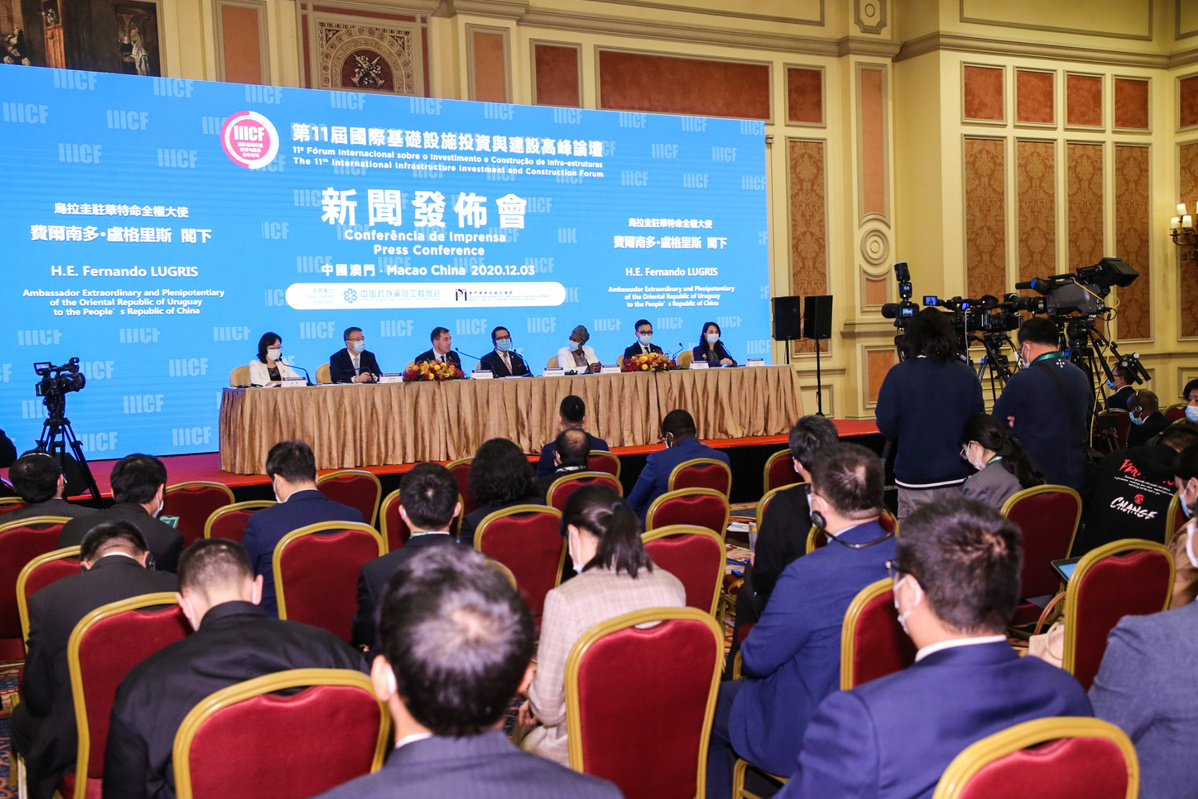 The two-day 11th IIICF, organized by the China International Contractors Association (CHINCA) and Macao Trade and Investment Promotion Institute (MTIPI), is one of the largest offline events in the Macao Special Administrative Region so far this year but also draws online audiences. [PROVIDED TO CHINA DAILY]

Infrastructure cooperation under the Belt and Road Initiative will remain promising, despite disruptions brought by the pandemic that has battered all sectors of the global economy, a forum heard on Dec 3.

"The overall development trend of the infrastructure sector is much better than what we have expected, which is a positive sign," said Fang Qiuchen, chairman of China International Contractors Association (CHINCA), adding that the short-term impact on global infrastructure investment and cooperation will be felt during the pandemic.

For Chinese contractors in particular, Fang said the turnover of contractual projects has been steadily increasing over the past few months.

"The general trend of the Belt and Road cooperation in infrastructure connectivity will remain unchanged in the future," said Fang. "I believe that in the post-pandemic era, the investment and construction of infrastructure will have rosy prospects."

Fang was speaking at a news conference on the closing day of the two-day 11th International Infrastructure Investment and Construction Forum (IIICF), which was held online and offline in the Macao Special Administrative Region.

Co-organized by CHINCA and the Macao Trade and Investment Promotion Institute (IPIM), the forum attracted over 1,000 delegates from governments, businesses and academics from more than 40 countries and regions. The theme of this year's forum was Responding to Challenges and Promoting Global Infrastructure Development. 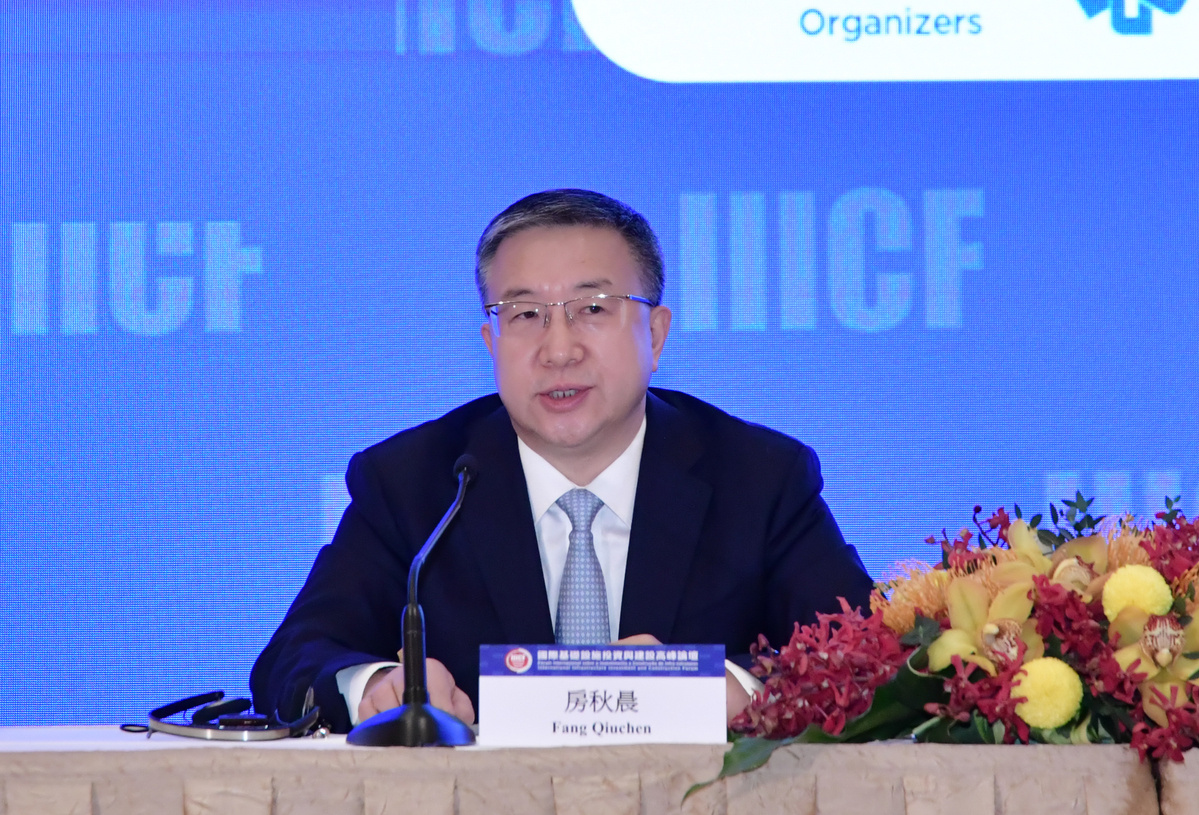 Noting infrastructure is an important engine driving the global economic recovery after the pandemic, Fang said infrastructure in the transportation and public health sectors will be in high demand.

Citing a list of the top 250 global contractors released by the Engineering News-Record magazine in August, Fang said Chinese contractors accounted for about a quarter of the total listed.

"Chinese companies are very competitive in the global infrastructure industry. I believe that through infrastructure and investment and cooperation with (partners) from different countries, especially those involved in the BRI, more fruitful results will be created," he said.

During the IIICF, the 6thChina-Latin American and Caribbean (LAC) Infrastructure Forum was also held.

Peng Tao, deputy director general of the Department of American and Oceanian Affairs at the Chinese Ministry of Commerce, said the forum was the first offline event between China and LAC countries this year.

The success of the forum "showed the belief and confidence that China and LAC countries will jointly overcome difficulties," said Peng, adding that China is working to build new cooperation platforms for countries around the world to jointly recover from the pandemic.

Noting infrastructure will be a core driving force that enables the economy to progress, Djauhari Oratmangun, Indonesian ambassador to China, said the investment from China to Indonesia has increased significantly over the past five years.

Last year, the investment from China to Indonesia "increased by 95.6 percent," he said. "The realization reached $4.7 billion." A number of BRI infrastructure projects are taking place in Indonesia, such as the Jakarta-Bandung high-speed railway and several economic corridors. 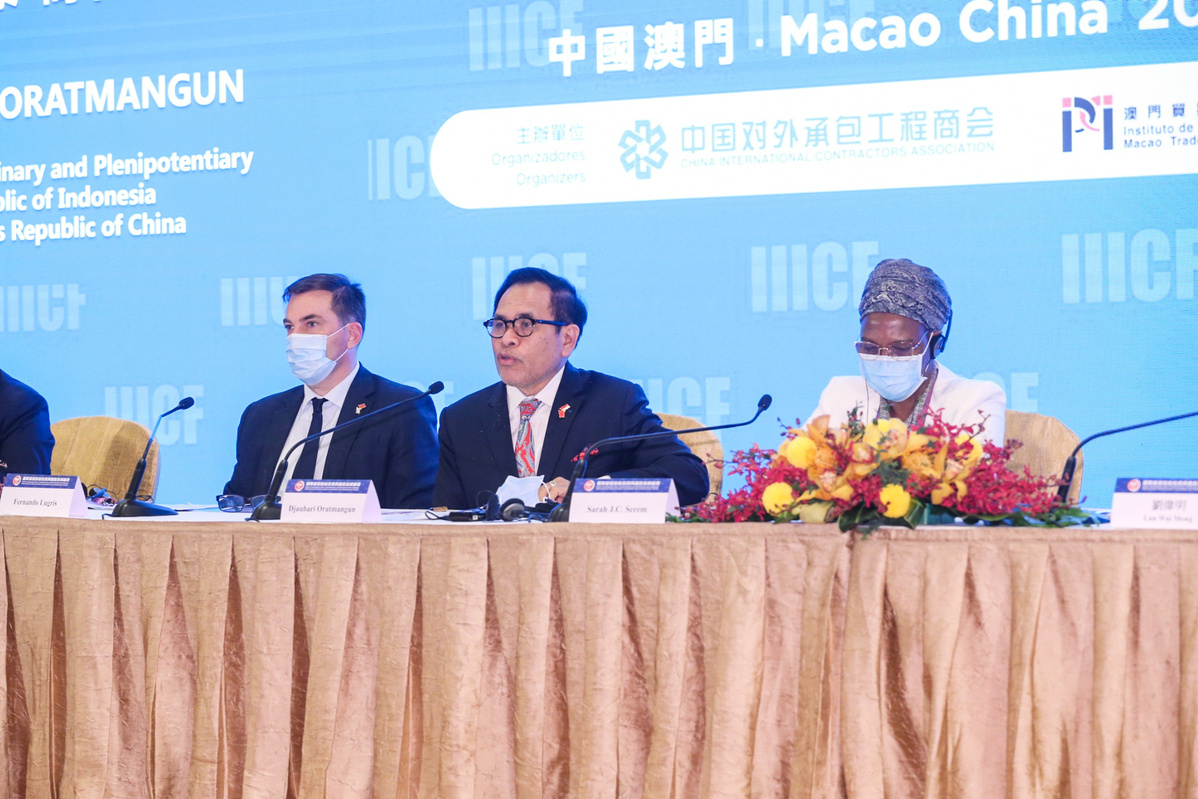 Kenyan Ambassador to China Sarah Serem said Kenya has witnessed "a lot of transformation and great development" in recent years, thanks to its collaboration and friendship with China.

"Even in the midst of this pandemic, we saw that there are great opportunities, particularly in the development of digital infrastructure," said Serem.

Juan Fernando Lugris Rodriguez, ambassador of Uruguay to China, said BRI, which includes the LAC, is an initiative that all countries are constructing together.

"It's going to be very important that we continue with international cooperation and that we enhance the dialogue and cooperation between LAC and China and Chinese companies, in order to find solutions to this COVID-19 crisis," said the ambassador.

IPIM President Lau Wai Ming told reporters that the forum has attracted the infrastructure industry in Macao to focus more on regional development and opportunities, so that they can play a proactive role in the development of the Guangdong-Hong Kong-Macao Greater Bay Area and the BRI.