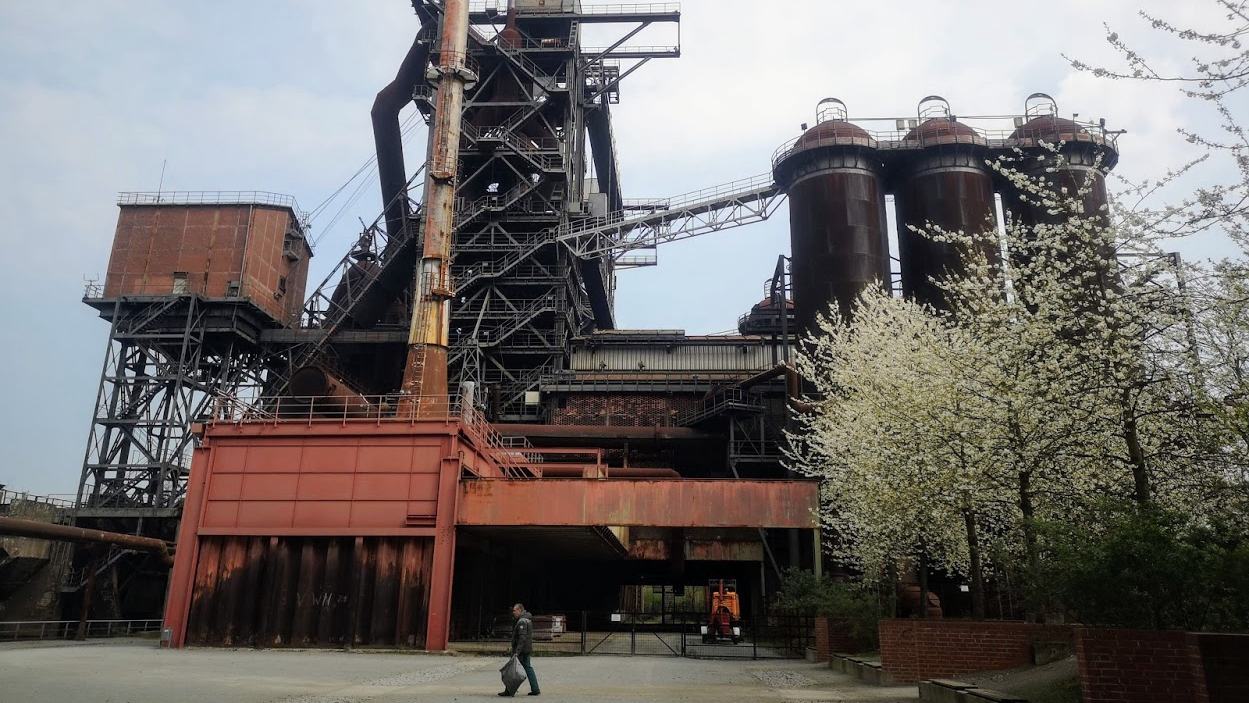 An old industrial park in Duisburg, Germany abandoned in 1985. The city was hit hard by deindustrialization back in the 1980s and 1990s and became known for its industrial decline and high unemployment. (Photo: CGTN)

The western German city of Duisburg has become the world's largest inland port thanks to the development of trade rail routes to and from China as part of Beijing's Belt and Road Initiative (BRI).

Germany's Ruhr Vally, with Duisburg at its heart, was hit hard by deindustrialization back in the 1980s and 1990s. It suddenly became known for its industrial decline and high unemployment.

But Duisburg has been fighting back.

The city's location at the confluence of the Rhine and Ruhr rivers and near many European highways makes it an ideal connection to European consumers.

So with the help of China, Duisburg has re-purposed the infrastructure left behind from its once bustling iron, coal and steel industries to restart its economic revival.

Today, millions of tons of cargo go through the Duisburg port – German car parts or French wines bound for China or Chinese garments and toys to sell in the rest of Europe.

Zhuo Li is a project manager with Contargo Trimodal Network which owns and operates the Duisburg Intermodal Terminal, one of the several cargo-handling hubs in the city's port.

"The number of trains is changing according to the sessions. On average it is 18 trains from China and 12 trains to China," said Zhuo.

Zhuo says it was the manufactures and consumers in and around the Duisburg Port that booked the first train to China back in 2011.

"Then after Chinese President Xi Jinping visited our terminal in the year 2014, the number of trains has been increasing rapidly."

The Duisburg Intermodal terminal, which sees, on average, 18 trains arriving from China and 12 trains leaving for China weekly. /CGTN Photo

Also increasing is the number of Chinese businesses to the city, according to Kai Yu who works for the Duisburg City Economic Promotion Agency.

Dr. Jur. Yong Wu moved to the city a year ago. His company, Trouver Consulting, has already helped 12 other Chinese businesses to settle in Duisburg.

"Most of the customers deal with import and export between Duisburg and China. That's why the railway is essential for our customers. Without this railway, there won't be that many customers for us. That is certain."

He also runs a 10,000-square meter business park which is filling up fast with new investors.

This is all bringing new life to the city. Planning is underway for a state of the art business district, new buildings are going up and new Chinese restaurants are opening.

Yet some argue that there needs to be more balanced trade along the nostalgically-named New Silk Road.

"This train is more familiar for the Chinese side," says Kai Yu. "So our job (at the Duisburg City Economic Promotion Agency) is also to make the European or German companies know about this transport (train route)."

Ironing out customs regulations and infrastructure along the six-country corridor will help cut down on time and make European products more competitive in the Chinese market, noted Zhuo Li at the Contargo Trimodal Network.

A model of a train station at the main train station of Duisburg, Germany. The city is rediscovering itself as the world's largest inland port, thanks in part to growing rail trade with China. /CGTN Photo

"The biggest challenge is the different track gauge in those countries. For example, in China and in Germany and Poland, the gauge is narrow. And in Russia, Belarus and Kazakhstan, the gauge is wide. Because of the different gauge sizes, each container has to be moved to another train twice."

This can push travel time from Duisburg to China for up to 20 days. Yet this is still faster than by sea and cheaper than by air.

And this is a good thing for Duisburg, which has managed to rediscover itself through this rail route as a logistics hub for Central and Eastern Europe, says Kai Yu.

"The Belt and Road Initiative has given Duisburg a chance to let the whole world rediscover the city."