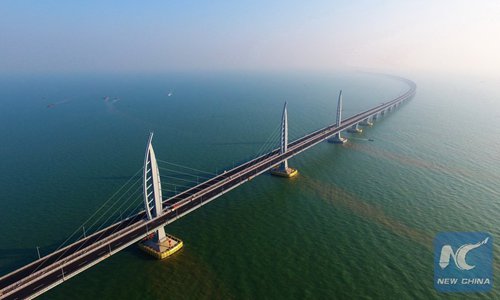 Engineer Yu Lie has spent more than 30 years working on bridges, but one in particular is his pride and joy - the Hong Kong-Zhuhai-Macao Bridge. Final touches are being added to the bridge, which will be the world's longest sea bridge that traverses over the most bustling waters in southern China. A technologically complicated bridge, it crosses shipping lanes in the Lingding Ocean and took seven years to build. The main structure measures 29.6 kilometers, consisting of a 22.9-km bridge section and a 6.7-km underground tunnel. Its total length is 55 kilometers. It used 420,000 tonnes of steel, enough to build 60 Eiffel Towers, and consumed 1.08 million cubic meters of cement. The bridge builders had to overcome some of the most complex challenges to ever confront them. As a result, the bridge can withstand a magnitude-8 earthquake and super typhoons, and has a service life of 120 years. "As the bridge is ready to open to the public, people will have high expectations from it in terms of its transport function and how it can benefit the people," said Yu, deputy director of HK-Zhuhai-Macao Bridge Authority. Yu has worked on the bridge since the initial preparations in 2004. "The bridge will not only be a transport link. It will be a social, economic, cultural, and tourism connection among the three areas," he said. The bridge will slash travel time between Hong Kong and Zhuhai from 3 hours to just 30 minutes, further integrating cities in the Pearl River Delta. Throughout history, key infrastructure has acted as a catalyst for development in many regions. Nearly 135 years ago, thousands of people in New York hit the streets to celebrate the commissioning of the Brooklyn Bridge, and people marveled at its magnificence and importance to their country. The Brooklyn Bridge witnessed the rise of New York as the economic and financial center of the world. After more than a century, the greatest engineering work of modern times is finally happening on the other side of the Pacific - in China. "Our country is very strong in bridge building," Yu said. "The HKZM Bridge highlights China's achievements in technology, equipment and research, and stands at a point leading to a brand new future." It is also believed to be a vital piece of infrastructure in building the 21st Century Maritime Silk Road, which is set to reshape the global economy. In 1988, Hong Kong businessman Arnold Ho opened a factory across the Lingding Ocean in Zhuhai City. Today, his company Print-Rite Holdings Ltd has become one of the biggest printing material manufacturers in the world. He usually travels between Hong Kong, Zhuhai and Macao. Riding on cars and ferries, a single journey can take hours. "Back then, there were not as many ferries. When I was in hurry to go back, if it happened that the typhoon came, I had to take a detour overland to go back to Hong Kong," said Ho. Now his journey back home will only take half an hour. "When the bridge is open, the opportunities it will bring are immense. Of course Zhuhai will attract more investors. As one of the first comers, I will have good opportunities to develop my company," he said. The bridge is located in one of the busiest waters in the world. Every day, more than 4,000 vessels navigate above the bridge tunnel and almost every other minute, planes take off or land at Hong Kong airport. As the Brooklyn Bridge witnessed the rise of New York, this bridge signals a boom for the bay area. The HK-Zhuhai-Macao Bridge not only traverses a natural divide, it straddles two social systems -- socialism and capitalism. The bridge management bureau is developing suitable solutions to fully tap the potentials of the world's biggest engineering wonder. Su Yi, assistant director of HK-Zhuhai-Macao Bridge Authority, said the governments of the three areas were discussing details over traffic permits, shuttle buses, emergency rescue and more. "It will break new grounds in terms of management," Su said. "We are looking forward to its opening and the sight of an endless stream of traffic."