CHINA Bridge to the future of China-Russia cooperation

Bridge to the future of China-Russia cooperation

Nadezhda Khizhniak, a Russian businesswoman, attends the China-Russia Expo every year, which is held in Harbin, capital of Northeast China's Heilongjiang Province. 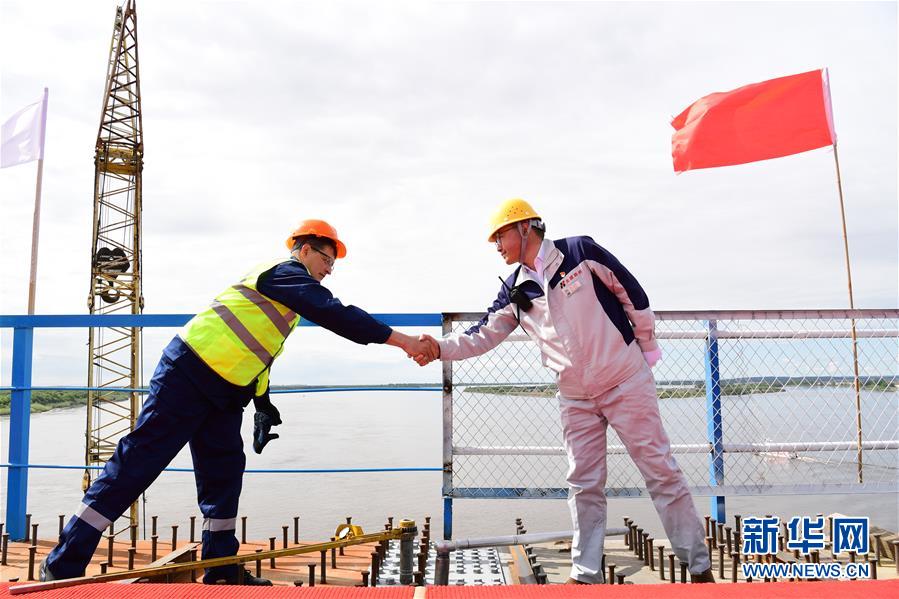 Workers from China and Russia shake hands after the two ends of the Blagoveshchensk-Heihe highway bridge were joined together on May 31, 2019. (Photo: Xinhua)

Bordering Russia, the province offers a geographic advantage for bilateral businesspeople such as Nadezhda Khizhniak, especially with the region's fast-developing cross-border infrastructure in recent years.

The city of Heihe and Russia's Blagoveshchensk face each other across the Heilongjiang River, also known as Amur River. This has caused great inconvenience to Song Xiaotao, chairman of the Heihe Liyuanda Special Automobile Manufacturing Co, a company that exports engineering machinery.

"River transportation is seriously affected by the weather and I hope a bridge connecting the two countries can be built," Song said.

The Chinese businessman's hope will soon come true as the two ends of the first highway bridge connecting China and Russia across the Heilong River were joined together in May.

With a length of 1,284 meters and a width of 14.5 meters, the Blagoveshchensk-Heihe highway bridge is a key part of a 19.9-kilometer long highway project that links the Jilin-Heilongjiang expressway in Northeast China and a highway in Blagoveshchensk.

Construction is also underway on the first railway bridge connecting China and Russia, which is expected to facilitate overland cross-border transportation after completion.

The railway bridge, with a designed annual throughput capacity of 21 million tons, connects Nizhneleninskoye in Russia with the border city of Tongjiang in Heilongjiang.

"To minimize the negative influence of the bridge's construction on the water ecosystem, we have purchased fish fry and released them into the upper river. Environmental protection authorities will strictly monitor the water quality and the survival of fish stocks during the spawning season," said Huang Yunyong, general manager of a China-Russia joint venture for the project.

The bridges carrying the hopes of people on both sides are expected to provide solid support in the economic and trade cooperation between the two countries.

"After being put into operation, the highway bridge can reduce a third of the logistics cost of bilateral companies and improve the transport efficiency by allowing goods to be transferred directly from China to Russia," Song said.

An Zhaozhen, vice director of the Russian Institute of Heilongjiang Provincial Academy of Social Sciences, said that a new Eurasia transport route will be formed after the operation of the China-Russia highway bridge and rail bridge, bringing more convenience to Eurasian countries.

The Russian Far East, located on the transport corridor between Asia and Europe, has "unique geographical advantages in conducting local-level cooperation with China," said Svetlana Utyasheva, Deputy Director of the international department of Russia's Ministry for the Development of the Russian Far East and Arctic, at a high-level forum during this year's China-Russia Expo.

She added that the Russian Far East has maintained regular exchanges and cooperation with China in agriculture, logistics and port industries, and hopes that such cooperation can be expanded to high-tech and tourism sectors.

In July, workers broke ground on the first cross-border cableway linking Heihe and Blagoveshchensk across the Heilong River with the hope of advancing tourism in the region.

The cross-border cableway will be 972 meters in length and will allow two-way traffic, with cable coaches capable of carrying 80 people each. The cableway is designed to have a transport capacity of six million people annually.

"A cableway is a safe and convenient shortcut for tourists to cross the Heilong River," said Qin Enting, Heihe's Communist Party chief. "Riders will also get a glimpse of the unique views of both cities."

To be completed and operational in 2021, the cableway project will promote tourism in the region with an expected 10-percent increase in the number of tourists to Heihe, according to estimates by relevant departments of Heihe.

Boosted by the cross-border infrastructure construction, trade between China and Russia has seen rapid growth in recent years.

"The improving infrastructure between the two countries will bring new opportunities in the economic and trade cooperation between the Russian Far East and China's northeastern provinces," Song Kui, head of the Contemporary China-Russia Regional Economy Research Institute in Heilongjiang, told Xinhua.