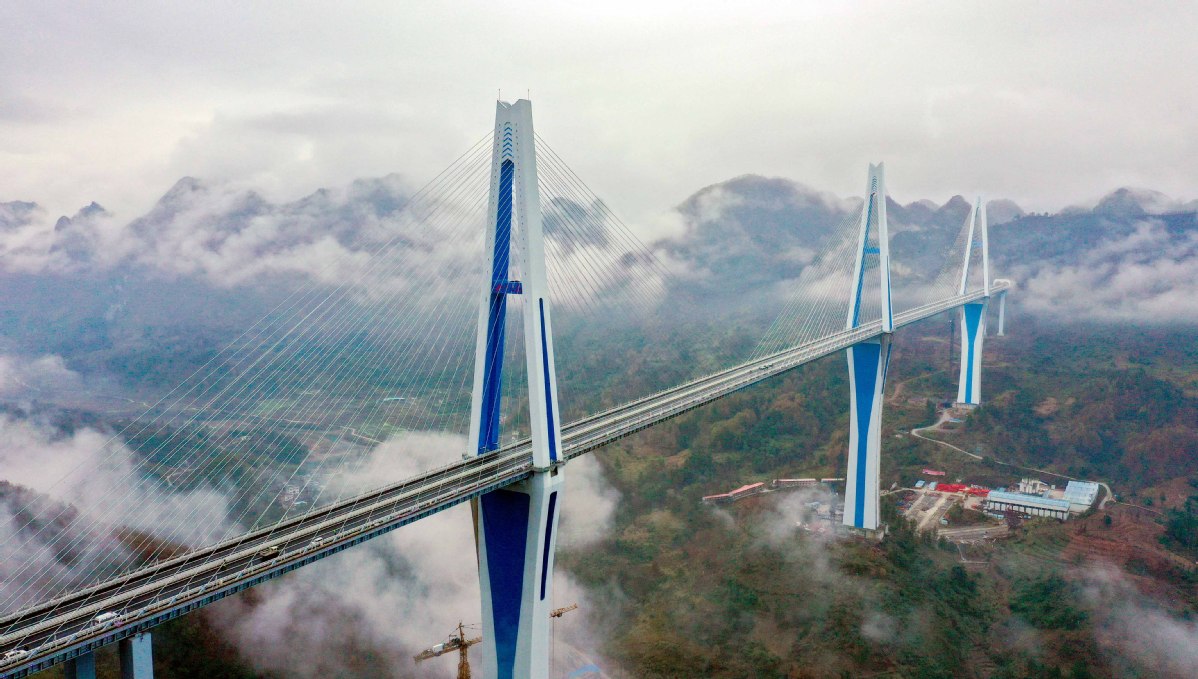 The Pingtang Grand Bridge in Guizhou province will open to traffic on Wednesday. (Photo: China Daily)

A super-tall bridge inaugurated in Southwest China's Guizhou province on Monday will connect the province's industrialized north and mountainous, less developed south and halve travel time between the impoverished counties of Pingtang and Luodian.

The 2,135-meter-long Pingtang Grand Bridge, supported by three towers and numerous cables, will be fully open to the public on Jan 1, the provincial transport authorities said.

It will allow drivers to travel between the two counties in about an hour via a newly completed highway with a speed limit of 80 kilometers an hour.

Construction of the cable-stayed bridge started in April 2016 and the provincial government said it cost 1.5 billion yuan ($214 million) to build.

Its tallest tower is 332 meters tall, equivalent to a 110-story skyscraper, and is the world's tallest reinforced concrete bridge tower, while the deck of the bridge is about 190 meters above the ground, authorities said.

Addressing the inauguration ceremony, provincial transport official Long Pingjiang said that with the completion of the bridge, Guizhou's highway network has reached a length of 7,000 km.

Figures provided by the provincial government show it had 6,453 km of highway last year, the seventh-longest nationwide.

Guizhou, once one of China's most isolated regions, has been charging ahead with infrastructure development in recent decades.

Provincial government figures show that by August, Guizhou was home to 47 of the world's highest 100 bridges, earning it the title of "global center of bridges".

The bridges soaring over the mountains and hills that account for more than 90 percent of Guizhou's landscape have been boosting tourism and investment in the province and turning it into a gateway in southwestern China, said Sun Zhigang, the province's Party secretary.

He said the improvements had led to surges in flows of people, goods and information.