A recruiter's booth outside the ballroom of a gathering of Chinese American engineers in Silicon Valley turned out to be very popular.

Within an hour, the recruiter, Angela Gao, had received many inquiries from those engineers attending the conference in February. 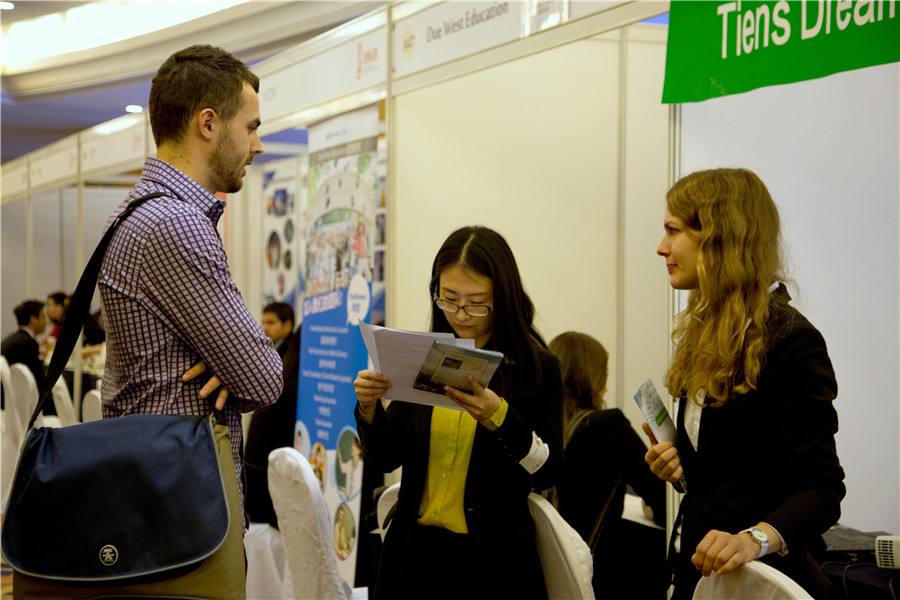 Two foreigners submit their applications at a job fair in Beijing. A growing number of overseas professionals are relocating to China to brighten their careers. (Photo: Li Sanxian/China Daily)

"There has been a rising interest from Chinese engineers working in the United States in returning to China," said Gao. "Most of them cite 'better career opportunities' and 'more room for development' as the main reasons," she said.

A semiconductor engineer in San Jose, who gave only his last name Yang, took a brochure of Gao's company, a Santa Clara, California-based headhunter called WE Career.

"I would expect a higher position or better compensation," said Yang, who currently holds a senior-level position in a big company.

He said it is not uncommon to see such recruiting booths set up at the venues of engineers' conferences. Major Chinese companies also come to the Silicon Valley to seek talent every year, he said.

To meet the increasing demand from Chinese clients, Gao said her company has been actively organizing recruitment events across the United States, especially on the campuses of top US universities, such as Stanford University and the University of California, Berkeley on the west Coast, and the Massachusetts Institute of Technology on the east Coast.

A growing number of overseas Chinese professionals are returning to China, with a majority of them from the US, according to a 2018 report on overseas Chinese talent by the employment-oriented social networking platform LinkedIn.

The report, which surveyed between 2,000 and 3,000 members in the first half of 2018, found the top reasons for returning to China include the ceiling for career development in foreign countries and pay rises as Chinese firms invest big to attract talent.

"Some friends of mine have recently accepted the offers of Chinese companies and their whole families have moved to China," said Yichiang Chang, an application engineer.

Chinese companies paid the relocation cost and offered at least doubled salaries, he said. He also admitted that the benefits of living in the San Francisco Bay Area were its "nice weather" and "better education for children".

Concerns for engineers seeking career opportunities in China include the lack of understanding the working environment of Chinese companies, he said.

Being promoted as "a role model of high-quality development", China's Guangdong-Hong Kong-Macao Greater Bay Area is poised to become "an international first-class bay area" and "a world-class city cluster" with a marked increase in its economic strength and regional competitiveness, according to a development blueprint released by the Chinese government in February.

"Hong Kong is a great fit for those engineers who want to start up their own companies," said Robin Won, a senior manager for investment promotion at Hong Kong Economic and Trade Office in San Francisco.

Her office also set up a booth at the engineers' event to promote the Greater Bay Area among Silicon Valley engineers.

"Hong Kong is part of China, but it has its own legal, tax and monetary systems," said Won.

"It will act as a facilitator for overseas high-tech professionals to tap into the opportunities of China's Bay Area," she said.