We have achieved brilliant results, built mutual trust and enhanced mutual understanding over the past 40 years of China’s reform and opening-up, said the German ambassador to China Clemens von Goetze when talking about China-German relations during a speech he delivered at Peking University on Thursday. 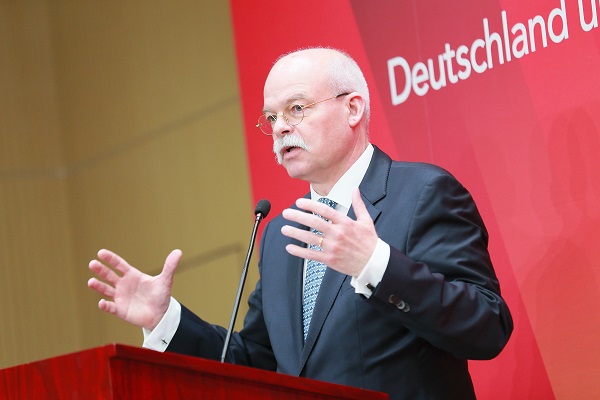 Goetze visited Peking University at the invitation of the Center for German Studies of the university on Thursday afternoon, after he took office as German ambassador to China last September.

Huang Liaoyu, director of the Center for German Studies of the Peking University, hosted the ambassador’s speech. He said that Goetze was “an experienced diplomat with more than 30 years in diplomacy.”

During Goetze’s diplomatic career, he has been to China many times and has been paying attention to China, said Huang.

Goetze looked back on the long-standing friendly relations between China and Germany during his speech with the theme of “Germany and China in the Fifth Decade of the Reform and Opening-Up Policy.”

He said that the two countries’ relations have developed rapidly after the Chinese government adopted the reform and opening-up policy.

“Our relations have developed to a new level with diversity and high density. Relations between the two sides have developed into true partnerships,” said Goetze, adding that the two countries are important global trading partners for each other.

The ambassador said that cooperation between the two countries is becoming more and more important in the face of more and more uncertain factors, international crises and global challenges.

Goetze hoped to further promote the cooperation and exchanges between the universities of the two countries. “We also hope to strengthen communication with the younger generation,” said Goetze.

Goetze had an in-depth communication with faculty and students of the Peking University after the speech.