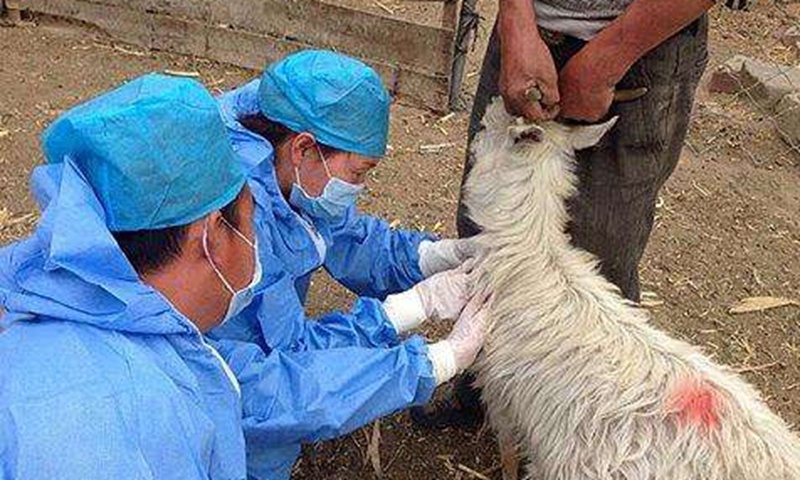 A total of 3,245 people had tested positive for Brucellosis as of Monday in Lanzhou, Northwest China's Gansu Province, after a local Brucella leakage in July-August 2019. The number is way more larger than expected and raised widespread concern over the disease's spread and its consequences.

More than 21,000 people had been tested as of Monday, of whom 4,646 had initially been classified as positive, with 3,245 confirmed positive by the Gansu Provincial Center for Disease Control and Prevention, the China News Service reported on Wednesday.

Nearly 20 out of the 40 infected patients who were interviewed by the media this year said they have suffered from fever, muscular pain and malaise, all of which are symptoms of Brucellosis, Caixin reported on Wednesday.

The report has triggered widespread public concern over the treatments and consequences of the infected patients, as the topic climbed to the top of the search bar on China's social network Sina Weibo, with more than 48 million views as of Tuesday evening.

The Lanzhou Health Commission said that compensation will be offered in October to the patients.

Eleven public medical institutions have been designated as hospitals, with green channels and specialized clinics to provide free testing and standardized treatment, according to the report.

Meanwhile, local authorities including the Gansu Provincial Health Commission and the Lanzhou Municipal Health Commission refused to disclose more information when reached by the Global Times on Wednesday. The incident happened between last July and August, after the Zhongmu Lanzhou biological pharmaceutical factory used expired disinfectant in its Brucella vaccine production, leading to bacteria-containing aerosols leaking in the area.

The Lanzhou Veterinary Research Institute was downwind of thefactory, and it thus become the direct victim of the leak and reported the first several cases of the outbreak in November 2019, which then led to infections of thousands of people, the report said.

Brucellosis is an infectious bacterial disease caused by Brucella. It can be transmitted by contact with infected livestock including cattle and sheep, while chances of human-to-human transmission are rare, according to a report released by the World Health Organization.

Experts suggest that people should not drink unsterilized raw milk from cows or sheep, to avoid contracting Brucellosis, the China News Service reported early in September.

The disease can cause incessant fever, fatigue, and joint and muscular pain. Some patients can no longer engage in heavy physical work, for which reason it is commonly known as "lazy man's disease."