Bullet train to link Beijing and Hong Kong in 9 hours 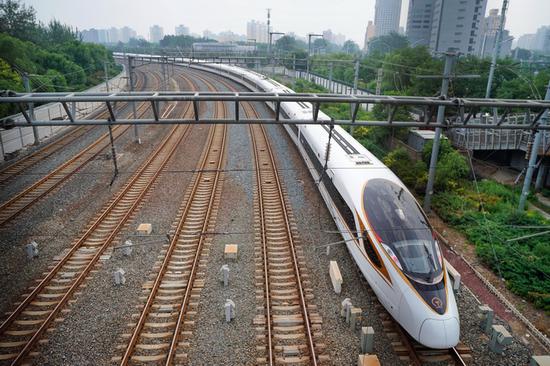 A bullet train runs on the rail. (File photo/Xinhua)

(ECNS) - In nine hours and at a fare of about 1,000 yuan ($146), passengers will be able to travel from Hong Kong to Beijing via the much-awaited Guangzhou-Shenzhen-Hong Kong High Speed Rail when the Hong Kong Section is put into use next month.

The 400,000-sqm Hong Kong West Kowloon Station is in its final stage of preparation with about 1,500 signs installed and a wide range of facilities available, according to Hong Kong-based rail transit network operator MTR Corporation.

The current train journey between the capital and special administrative region takes about 24 hours, which will be slashed to about nine hours - eight hours on the Beijing West- Guangzhou South bullet train and 48 minutes from Guangzhou to Hong Kong along the new 26km section.

A port will also be established at Hong Kong West Kowloon Station where the mainland and HKSAR will carry out exit and entry supervision. Passengers from Hong Kong will be able to pass through immigration inspection, customs clearance, and quarantine before taking the high-speed train to 17 destinations on the mainland.

It is estimated that 109,200 passengers per day will travel between Hong Kong and the mainland during the first year of operation.