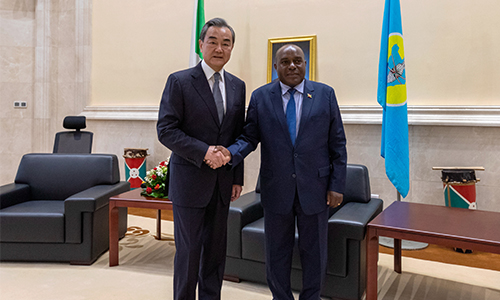 Butore spoke highly of Burundi-China ties, stressing that in recent years, the bilateral relations are developing at a high level.

He said, the two countries have seen frequent high-level exchanges, with fruitful cooperation in various sectors.

No matter how its internal situation may evolve, Burundi will not change its friendly policy toward China, he said.

Butore said Burundi is grateful to China for supporting its development and speaking up for it on international occasions, stressing that Burundi will firmly support China on issues involving China's core interests and major concerns.

Burundi is willing to learn from China's experience in socio-economic development and governance and deepen exchanges and cooperation of the ruling parties of the two nations, he said, adding the country also wants to strengthen cooperation on sectors including agriculture, education and health with China.

Butore added that the two sides should enhance communication and coordination in multilateral affairs.

Wang said Burundi is a reliable and sincere friend of China, stressing that China highly appreciates Burundi's firm adherence to a friendly policy with China.

China firmly supports Burundi's efforts to safeguard its sovereignty,independence and national dignity,as well as its legitimate rights and interests, and supports the country in pursuing a development path that suits its national conditions, said Wang.

No matter how the international situation may evolve, China is willing to be good friends, good partners and good brothers with Burundi, said Wang.

The high level of mutual trust between China and Burundi has provided an important impetus for the pragmatic cooperation between the two countries, Wang said, adding that China is willing to strengthen mutual learning on governance and continue to provide assistance and support to Burundi within its capacity.

China would like to take agricultural cooperation as a starting point to enhance the endogenous driving force and sustainable development capacity of the Burundian economy,said Wang.

Wang said, the two sides should also strengthen communication and coordination in international and regional affairs to safeguard the common interests of developing countries as well as multilateralism, fairness and justice.