The opening ceremony of the first China International Import Expo (CIIE) was launched Monday in Shanghai. Chinese President Xi Jinping delivered a keynote speech called "Work Together for an Open Global Economy That is Innovative and Inclusive", which gained praise and recognition from leaders who attended the expo. 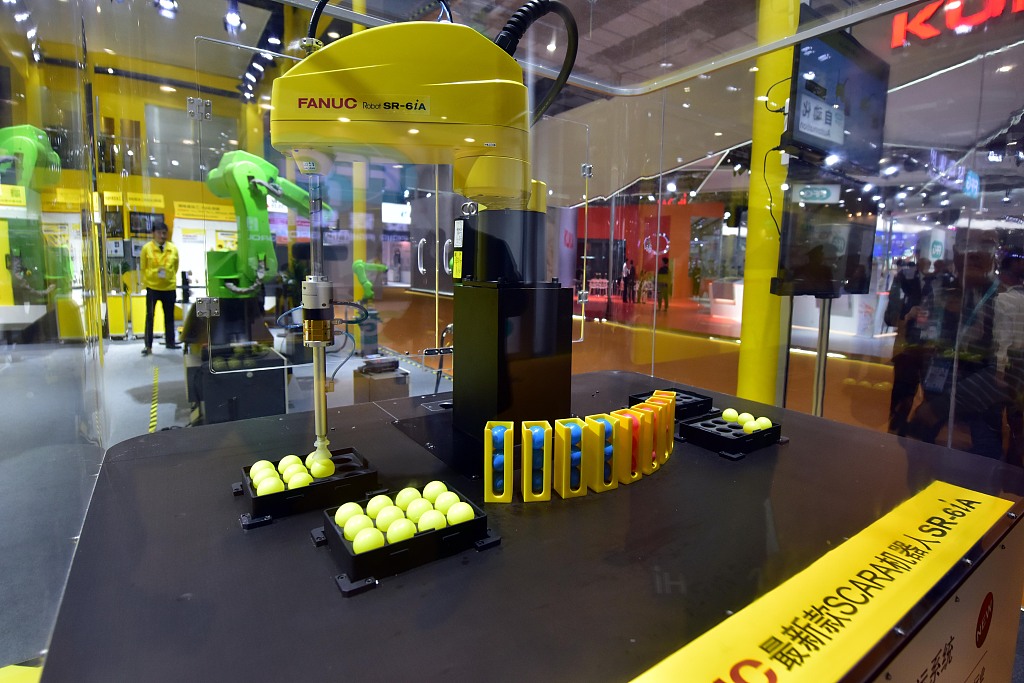 "I very much agree with what President Xi said at the opening ceremony. Economic globalization, as an irreversible trend of history, has greatly boosted global growth," the chairman and CEO of Shandong-headquartered Inspur Group, Sun Pishu, told People's Daily. China has opened up the country to facilitate development and accomplished great achievements that are visible and tangible. The achievements of 40 years of reform and opening up have set another example for the historical law of human society development that "openness brings progress while seclusion leads to backwardness."

Lothar Herrmann, Siemens Greater China CEO, expressed his gladness for Xi's pledge that "China's door will never be closed. It will only open still wider." In today's interconnected world, no country or enterprise can develop in isolation, he said. 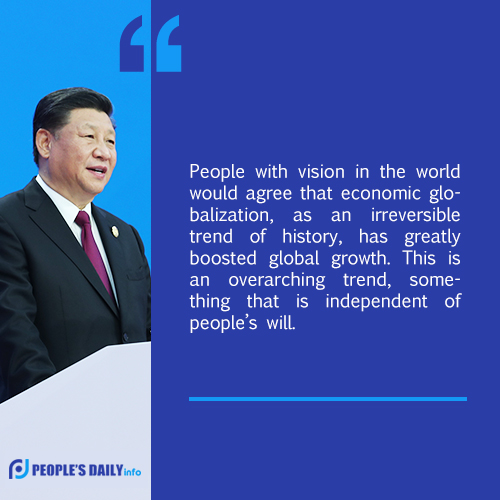 Xi's words that economies make progress through exchanges and inter-connectivity and fall behind because of seclusion gave Dr. Herwig A. Buchholz a deep impression.

The head of Merck's Group Corporate Responsibility noted that free trade is the main theme of the current global economy. Only by getting through the bloodline will it help to better enlarge the cake of international trade. Not only does China call for it, but it fulfills its promises. The Chinese market has enormous potential, especially as the Chinese economy continues to develop; this potential is constantly being released, Buchholz said. 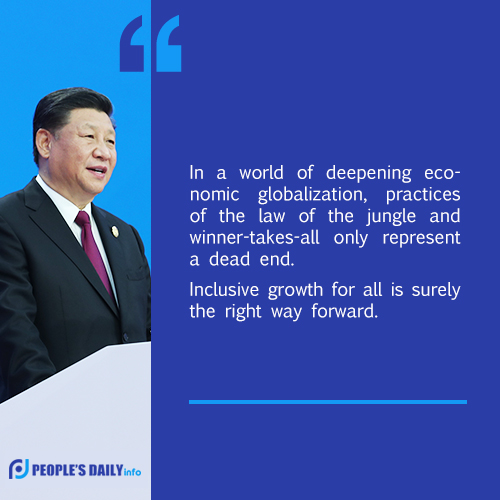 Unilateralism and protectionism are not solutions

"President Xi stressed that progress of human society requires continued efforts of all countries to advance opening up, cooperation and win-win development, instead of seclusion, confrontation and monopoly," New Zealand's mayor of Dunedin, Dave Cull, said. "This, I think, offers a solution to fix the unfavorable factors in the development of the global economy." In some countries, unilateralism and protectionism can only shift domestic contradictions, but cannot completely solve problems in their own economic development, the mayor said.

Today, with the rapid development of globalization, no one can stop or avoid it. Only by being adept at using globalization to strengthen cooperation can we truly achieve mutual benefits and win-win results and have a positive impact on the development of the world economy, he added. 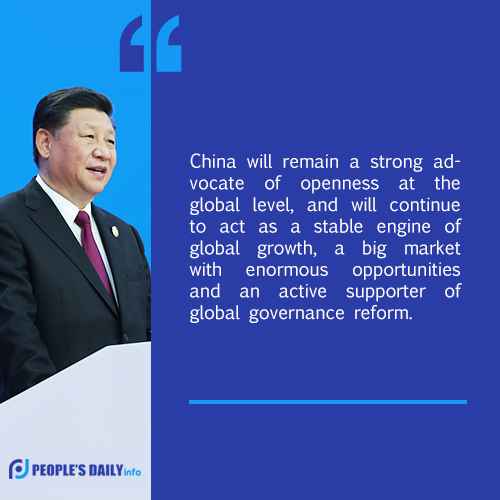 Zhang Jindong, the Chairman of Suning Holdings Group, one of China's largest retailers, said that the five key measures to expand opening up proposed by President Xi will provide a global development opportunity. Hence, Chinese enterprises will embrace the world market comprehensively and deeply.

"President Xi Jinping stressed that 'China's door will never be closed. It will only open still wider.' It shows us China's determination and confidence in expanding opening-up," said Philip Tsai, the global vice chairman of Deloitte. He also thought that this whole process will help spark competition in related industries and improve the quality of the industry. 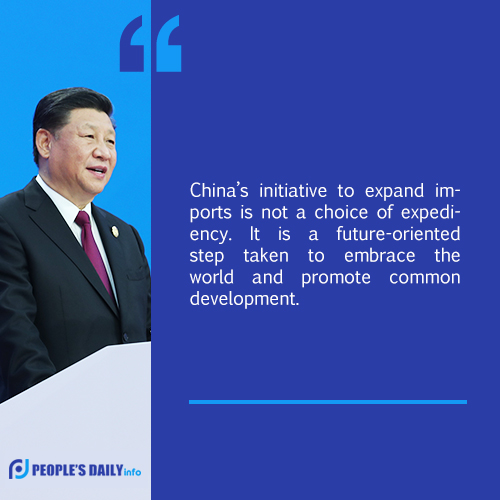 This statement is also applicable to the cross-border e-commerce market, said Zhang. In the face of new opportunities for China to expand imports, overseas brands should seize opportunities in the Chinese market, actively cooperate with more powerful Chinese platforms, jointly promote the development of cross-border e-commerce and better meet the needs of Chinese consumers, he added. 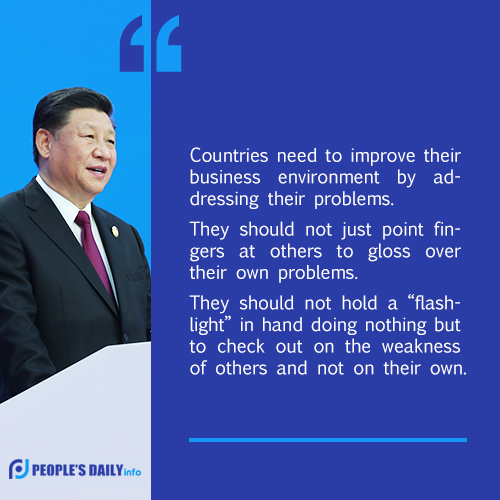 "China has made great efforts to build a world-class business environment, and I strongly agree with President Xi that countries need to improve their business environment by addressing their problems," the executive vice president of AstraZeneca, Wang Lei, said.

This will not only bring better development opportunities for companies in China, but also provide a broader market and business opportunities for countries around the world, said Wang. Economic globalization and free trade are heartening news for both Chinese and foreign businesses. "We highly appreciate the foresight of Chinese leaders to bring the world closer together for common development and prosperity," said Wang. 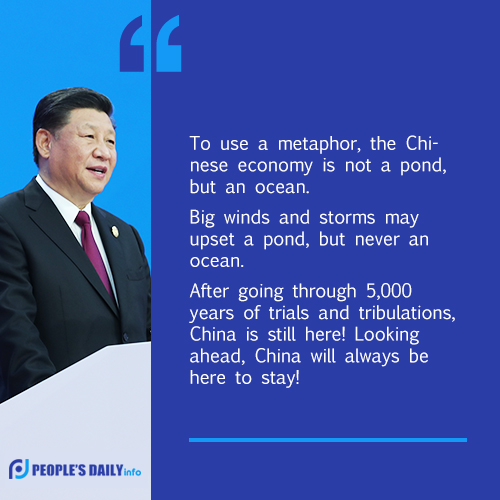 Amazed by the openness, innovation and inclusiveness

Harld Peters, the President of UPS China, said "30 years ago, UPS located its China headquarters in Shanghai for the city's character, advantage and connectivity of being open. Once I came to this city overseeing our business here, I have been amazed by the clear features of Shanghai, being open, innovative and inclusive. This is also a dynamic microcosm of China's current landscape. From Shanghai to China, UPS will keep enhancing our services and embody our long-term commitment."