BEIJING, Jan. 31 (ChinaMil) -- The China Arms Control and Disarmament Association (CACDA) held a public event themed “Safeguarding NPT Regime: Shared Responsibility and Joint Efforts”, during the Beijing P5 Conference in Beijing on Thursday. The heads of delegations from China, the US, Russia, the UK and France were invited to meet with the public. 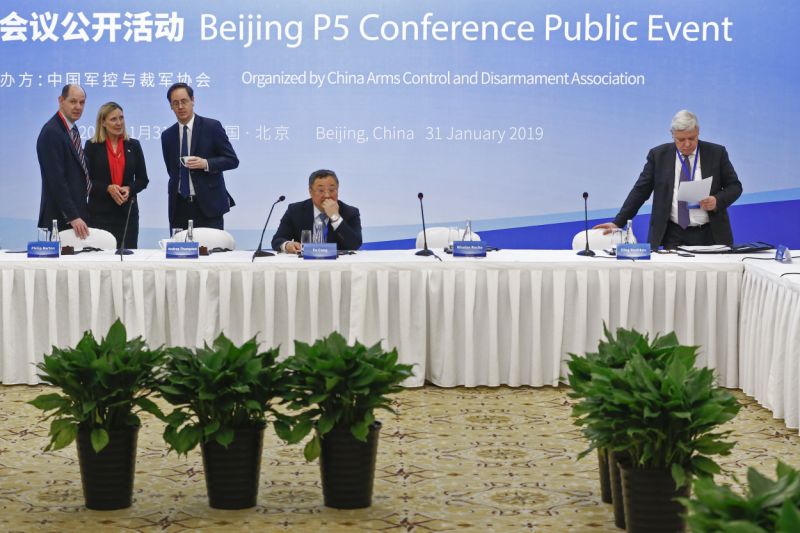 Delegation members from the UN Security Council's five permanent members (P5) from left; Philip Barton of the United Kingdom, Andrea Thompson of the US, Nicolas Roche of France, Fu Cong of China, and Oleg Rozhkov of Russia attend a panel discussion after a Treaty on the Non-Proliferation of Nuclear Weapons (NPT) conference in Beijing, China, Thursday, Jan. 31, 2019. (Photo: China Military Online)

The annual conference of the five permanent members of the United Nations Security Council (P5) hosted by China was held from 30 to 31 January 2019 in Beijing. During the closed-door conference, delegations from the five countries conducted in-depth exchanges on nuclear policy and nuclear strategy, and discussed issues such as nuclear disarmament, nuclear non-proliferation and peaceful use of nuclear energy. The five countries will work together to address international security challenges and maintain global strategic stability and multilateral arms control system.

At the invitation of CACDA, the most authoritative non-governmental organization in the field of nuclear disarmament and nuclear non-proliferation, heads of delegations from the five countries met with the public and introduced the contribution and efforts of their countries in implementing the NPT commitments during the Beijing P5 Conference on Thursday morning.

At the same time, five experts from the five countries were invited to interpret the nuclear policies and practices of the five countries, in a bid to strengthen exchanges and interactions between governments and civil societies, academia and news organizations on the important issue of strategic security and arms control diplomacy.