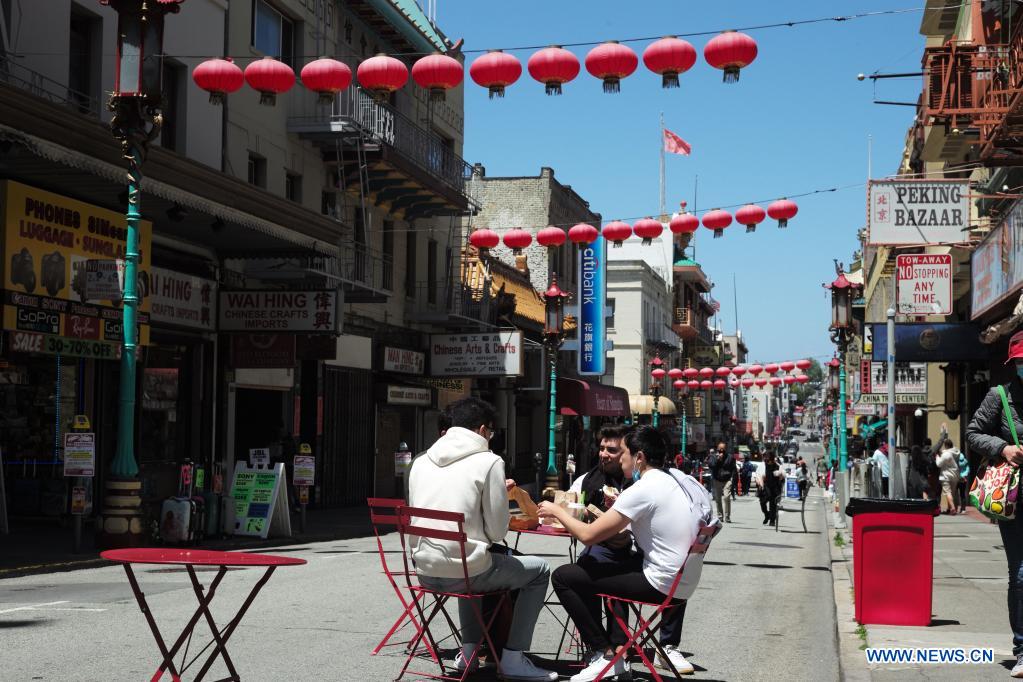 LOS ANGELES, Sept. 29 (Xinhua) -- California officials, representatives of local organizations and Chinese communities extended greetings and congratulations on China's National Day, which falls on Oct. 1, during an online celebration held by the Chinese Consulate General in Los Angeles on Thursday.

U.S. Congresswoman Judy Chu said in her video message at the online event that she hopes such events will "promote great cooperation between the United States and China."

"This will ensure a safer and better future for us all," she noted.

Chu said she was proud of her roots. "My mother came here from Xinhui in Guangdong province, so did my father's parents. Imagine from there I could become the first Chinese American woman ever elected to (U.S.) Congress."

"I am proud that many residents of my district who came from China, who established themselves so successfully here, and who contributed enormously to the community in Southern California," she added.

Chu was elected to the U.S. House of Representatives in July 2009. She represents California's 27th congressional district, which includes Pasadena and the west San Gabriel Valley of Southern California. San Gabriel Valley, renowned for its large Asian American community, is home to over half of Los Angeles County's Chinese American population.

Anthony Rendon, speaker of the California State Assembly, congratulated China on its National Day on behalf of California.

"I understand the tremendous accomplishments made by the people of your country. I am looking forward to continued cultural, educational and environmental exchanges," he said.

The Golden State, home to around 40 million residents, is the most populous state in the United States. China is one of California's largest trading partners and California attracts the biggest amount of Chinese investment, tourists and students among all U.S. states.

Kathryn Barger, a member of the Los Angeles County Board of Supervisors, also delivered her warm congratulations to China.

"With sincere congratulations and best wishes, the Board of Supervisors of the County of Los Angeles does hereby join your celebration," said Barger in a written message.

With a population of more than 10 million residents, Los Angeles County is the most populous county in California and the country.

Curt Hagman, chairman of Board of Supervisors, County of San Bernardino, also offered his well wishes to China.

"Thank you for your partnership and your friendship. Looking forward to opportunities for cooperation and friendship in the future," he noted.

Jeffrey Greene, chairman of the Sino-American Aviation Heritage Foundation, extended to China cordial greetings and best wishes on behalf of the organization, representing the famed "Flying Tiger" veterans who served in China to help the Chinese combat the Japanese invasion during World War II.

Many of the veterans, who returned to China in trips organized by the organization, witnessed the remarkable growth of China, Greene said.

"They all feel proud of what they see," he said, adding that those veterans felt they were part of it because they helped to defend China 80 years ago.

Chinese Consul General in Los Angeles Zhang Ping expressed heartfelt thanks in his video speech to all the friends for their support for China's modernization efforts and the development of China-U.S. relationship.

He stressed that a sound and steady China-U.S. relationship is the shared expectation of the international community and the common aspiration of the two peoples.

"Sub-national exchanges and cooperation is an important part of China-U.S. relations and plays a vital role in promoting bilateral relationship," Zhang said, noting that the consulate general is willing to join efforts with people from all walks of life in its consular district to enhance mutual understanding and expand win-win cooperation for the benefit of the two peoples.