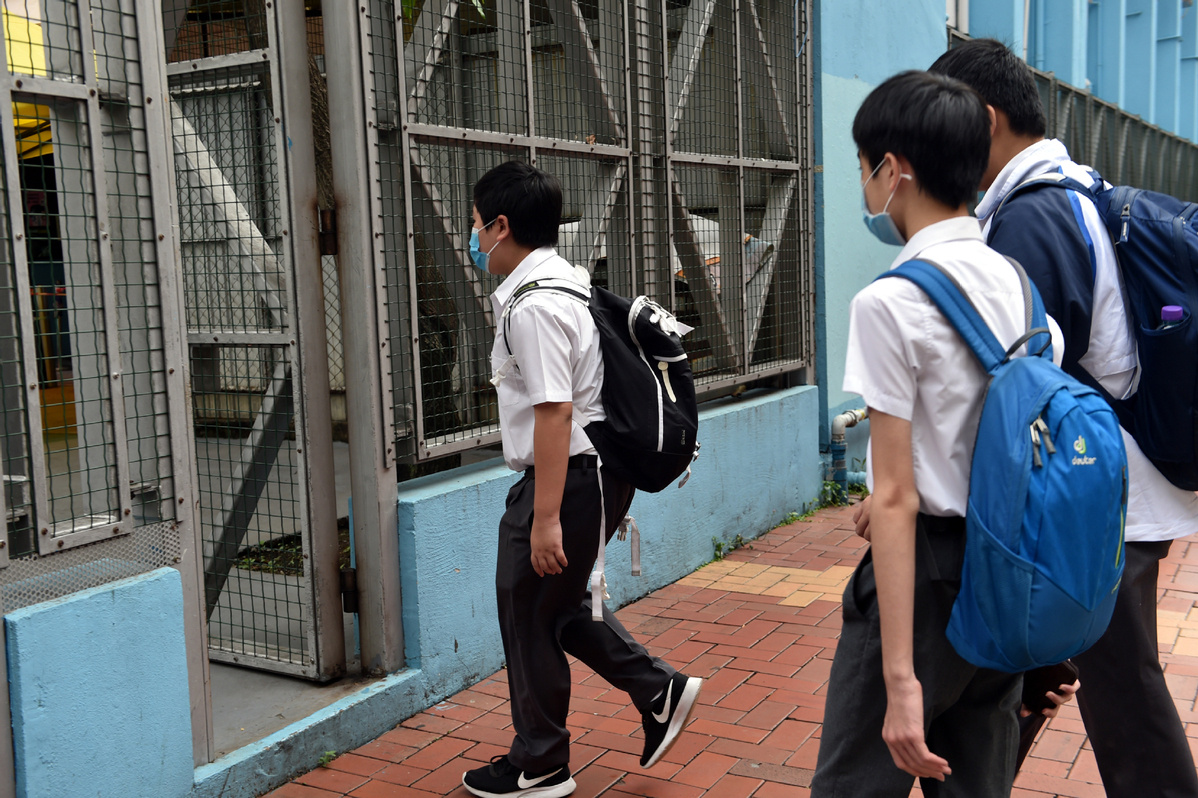 Schools should not allow students to join the vote or any class boycott. (Photo: Xinhua)

The government of the Hong Kong Special Administrative Region, civic groups and educators blasted some opposition activists and organizations over the weekend for using young students as pawns for their political gain while jeopardizing the SAR's interests.

Their criticism came as opposition activist Joshua Wong Chi-fung teamed up with the Hong Kong Secondary School Action Platform and some 20 trade unions to organize an online ballot to rally support for general strikes and class boycotts to oppose the national security legislation for the city.

Chief Secretary for Administration Matthew Cheung Kin-chung said the SAR government severely condemned the move. It might harm Hong Kong as the city is struggling to recover after being hard hit by last year's social unrest and the ongoing COVID-19 pandemic, he said in a blog post on Sunday.

The proposed national security law will stabilize Hong Kong and provide the city with an opportunity to get back on track and move on, Cheung said, calling on students in the city not to join the vote or any class boycott, and stay away from being used as "political pawns".

Talking to the Chinese-language newspaper Ta Kung Pao on Friday, Secretary for Education Kevin Yeung Yun-hung said the SAR's Education Bureau will play its role in protecting students and creating a better learning environment for the young generation.

He also said that changes to Hong Kong's education system are urgently needed, in a bid to instill a sense of national identity among students.

The education chief issued an open letter to all principals of the city's primary schools and secondary schools on Wednesday, noting the government strongly denounced the ballot and the class boycott, as both of them treat students as political bargaining chips.

Schools should not allow students to join the vote or any class boycott, Yueng said in the letter.

The Hong Kong Chinese People's Political Consultative Conference (Provincial) Members Association described such a move as "shameful" as the organizers were using students to advance their political agenda.

The association said in a statement on Friday that students could accidentally get caught in violent actions that could ruin their career prospects, which would be "heartbreaking".

Police data show around 40 percent of the 9,000 people arrested for protest-related offenses since last June were students.

The association expressed its firm support for Hong Kong's education reform, which will serve to better implement the "one country, two systems" principle. Schools should also teach students the importance of the Basic Law and national security, according to the statement.

Lee Hiu-ying, a council member of the Hong Kong Federation of Education Workers, said young students need to be protected from being used. They should not be at the front lines of political turmoil, he said.

Francis Lui Ting-ming, emeritus professor of the Hong Kong University of Science and Technology, agreed, saying the city's education system should be in line with the "one country, two systems" principle.