CHINA Calls to shut down Apple Daily mount as observers see it as 'legitimate, necessary'

Calls to shut down Apple Daily mount as observers see it as 'legitimate, necessary' 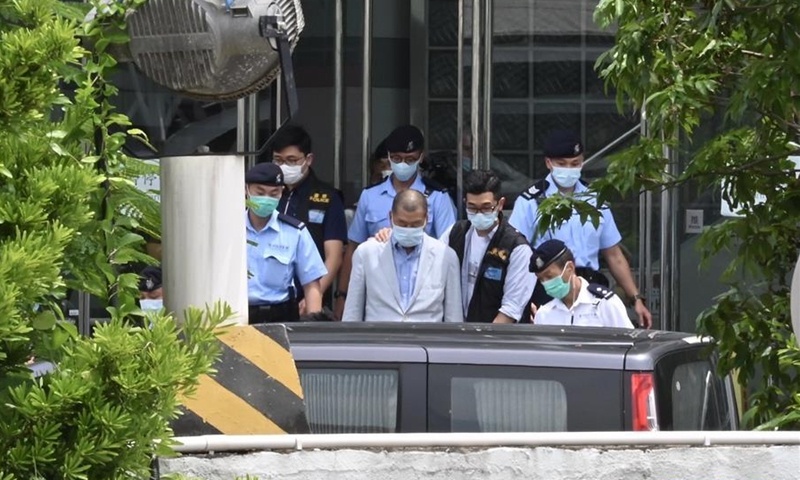 Jimmy Lai Chee-ying is taken by the police to the headquarters of Apple Daily for investigation in Hong Kong, south China, Aug. 10, 2020. (Photo: Xinhua)

While Apple Daily has been struggling to continue operations amid low funds after the arrests of its senior executives, and the police search of its offices and the freezing of its assets, lawyers and experts in Hong Kong consider the suspension of the paper's operation and a complete shutdown as a legitimate and necessary move given its misdeeds on suspicion of violating the national security law amid rising calls for a clampdown on this "poisoned Apple."

The paper, which has been in disguise as a "fighter for freedom of speech," said it only had enough cash flow to continue normal operations for a few weeks, according to media reports on Sunday, and it plans to apply to unfreeze part of its assets on Monday to avoid violating labor laws for unpaid wages.

The department for safeguarding the national security of the Hong Kong Police Force (HKPF) arrested the editor-in-chief and four directors on suspicion of conspiracy to collude with foreign forces and froze HK$18 million ($2.3 million) in assets during a Thursday morning operation, the second time that Apply Daily, founded and owned by Jimmy Lai Chee-ying, who bears multiple charges including conspiracy to collude with foreign countries or forces to endanger national security, has been searched since the national security law for Hong Kong came into force on June 30, 2020.

When officials from both the central government and Hong Kong Special Administrative Region (HKSAR) government denounced the paper's true intention of challenging the national security law by using "freedom of speech" as "a shield," claiming that "no right or freedom, including that of press, can cross the line of national security," some legal experts in Hong Kong said it is time to shut down Apple Daily, as rather than being a media outlet, the paper has become a radical anti-government tool in spreading lies and hatred by running eye-catching, seditious claims with bias to achieve political goals, and it had not abandoned its attempts of colluding with foreign forces since the national security law for Hong Kong came into force.

"What Apple Daily has done is crystal clear: The paper takes the national security law as nothing by continuing violating the law and it has gone far beyond ethical and journalistic standards," Louis Chen, general secretary of Hong Kong Legal Exchange Foundation, told the Global Times on Sunday.

There is tons of evidence showing Apple Daily colluding with foreign forces and instigating sedition, whether it is the live chat of Lai asking for help from Western forces or published claims of the so-called support from Western politicians, which are all suspected of violating the law, Chen said, noting that authorities must stop the paper from being published.

Apple Daily editor-in-chief Ryan Law Wai-kwong and Cheung Kim-hung, CEO of Next Digital who were charged with colluding with foreign or external forces in endangering national security were denied on bail at Saturday's hearing. The next hearing is scheduled for August 13.

Hong Kong newspaper the Oriental Daily reported on Sunday that since there has been information about the clampdown of Apple Daily in May, at least 10 senior management staff in its publishing sector have quit, making it harder to operate.

"The case involves the boss and its senior executives, which makes the whole company a platform that is suspected of endangering national security, which should be shut down, at least suspended to cooperate with law enforcement," Lawrence Tang, a member of the Chinese Association of Hong Kong and Macao Studies, told the Global Times on Sunday.

According to Article 31 of the national security law for Hong Kong, an incorporated or unincorporated body such as a company or an organization which commits an offense under the law will be fined, and the operation of the company or the organization shall be suspended or its license or business permit shall be revoked if the body has been punished for committing an offense under the law.

There is strong evidence that dozens of questionable articles published by Apple Daily since 2019 played a crucial part in the conspiracy which provided ammunition for foreign countries and institutions or organizations to impose sanctions on China and the Hong Kong region, Senior Superintendent of Hong Kong police Steve Li Kwai-wah told reporters after the arrests on Thursday.

Former chief executive of the HKSAR government Leung Chun-ying has posted several times on his own Facebook questioning the legitimate role of Apple Daily as a media outlet when it published the anti-government protests' slogans previously, and where some charity funds related to the paper went to when some raised doubts about whether those funds supported the black-clad riots in Hong Kong in 2019.

Following the latest arrests and police operation, Apple Daily posted a letter to its readers saying its staff would stick to their job, which Leung called a shame to the end, a shame of Hong Kong and a shame of global media.

Among three non-executive independent directors, Louis Gordon Crovitz is American and his wife Minky Worden who works for Human Rights Watch, has called constantly for the international community to pressure China and attack the country on its Xinjiang and Hong Kong policies as well as calling for a boycott of the Winter Olympic Games in China, Leung said in a post, asking "who else can compare with Apple Daily on external force collusion?"

Some legal experts consider that it would be a legitimate move if authorities in Hong Kong shut it down in accordance with the local law.

According to the Societies Ordinance, the Societies Officer may recommend the Secretary for Security to make an order prohibiting the operation or continued operation of the society or the branch if he reasonably believes that the prohibition of the operation or continued operation of a society or a branch is necessary in the interests of national security or public safety or if it is a political body that has a connection with a foreign political organization or a political organization of Taiwan.