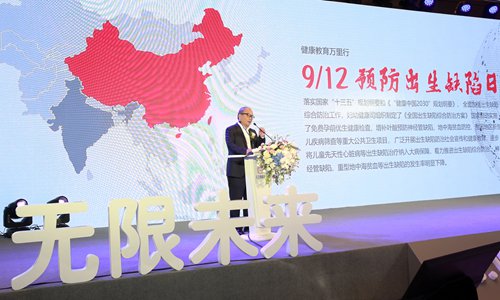 Themed "Infinite Future - Well-prepared Birth," the campaign is headed by the China Medical Education Association (CMEA) and the WHO Collaborating Center for Children's Health and Environment under the guidance of the China Population Communication Network.

It aimed at preventing birth defects by calling the  public's attention, publicizing knowledge and advocating prenatal eugenic check-ups and folic acid supplementation during pregnancy, said Wang Zhen, a senior CMEA official, at the launch of the program.

Birth defects are a major cause of infant mortality in their first years, according to Wang Shaowei, director of the obstetrics department of Beijing Hospital.

Folic acid deficiency contributes to most CHD cases and neutral tube defects to children, and cause placental abruption and pregnancy hypertension to mothers.

Dai Yaohua, director of the WHO Collaborating Center for Children's Health and Environment, told the Global Times that the WHO customizes nutrition formulations to children and women by country and region, and the government provides financial support and implementing plans.

Multiple projects have been launched to provide free nutritional packages that contain vitamins and micro nutrients to children on a daily basis in poverty-stricken areas in China, according to Dai.

Han Hui, a deputy director of the maternal and child health center of the Chinese Center for Disease Control and Prevention, said a working mechanism with the efforts of government, society and families has been formed in China , with infant mortality rate expected to be reduced to five per thousand by 2030.

Han said China has established a three-tier birth-defect prevention program in which first-tier measures are aimed at reinforcing education on birth defect prevention. The second is to reduce the occurrence of birth defects, and the third tier is to improve the lives of defected children.

The latest report on women's and children's health of the Chinese National Health Commission in May shows that China has made remarkable achievements in terms of lowering the child mortality rate as the rate of children before 5 years old dropped from 3.5 per thousand to 1.6 per thousand in 2017.

"China has been monitoring people's health literacy since 2008," Shi told the Global Times. "Health literacy refers to the health knowledge mastered by the people and people's ability of using the knowledge to stay healthy," Shi explained.

The National Health Commission said the health literacy of Chinese people has remained at 17 percent, and the level of those aware of birth defects is not high, although there is no detailed data, said Shi, who had participated in the survey.

With a growing number of Chinese families paying more attention to the health of the next generation, they still have no access to systematic health training but learn about maternal and child health care on their own, said Shi.

Dai suggests that education on maternal and child health care be carried out in school.

"Pictures of defective babies should show teenagers that unhealthy habits and nutrition deficiency could lead to birth defects and neonatal deformity," Dai told the Global Times.

The program also includes a road-trip campaign, in which a caravan will travel to 10 cities of six of China's most populated provinces to spread maternal and child health care knowledge to prevent birth defects.