Beijing is continuing to battle COVID-19 clusters in three schools with more cases reported over the Mid-Autumn Festival holiday.

Since the first locally transmitted case, a student from the Changping campus of Beijing University of Chemical Technology, was reported early last week, Beijing has reported a total of 96 cases from three schools-50 from BUCT, 18 from the High School Affiliated to Minzu University of China and 28 from the Communication University of China, according to Liu Xiaofeng, deputy director of the Beijing Center for Disease Prevention and Control, at a news conference, on Monday. 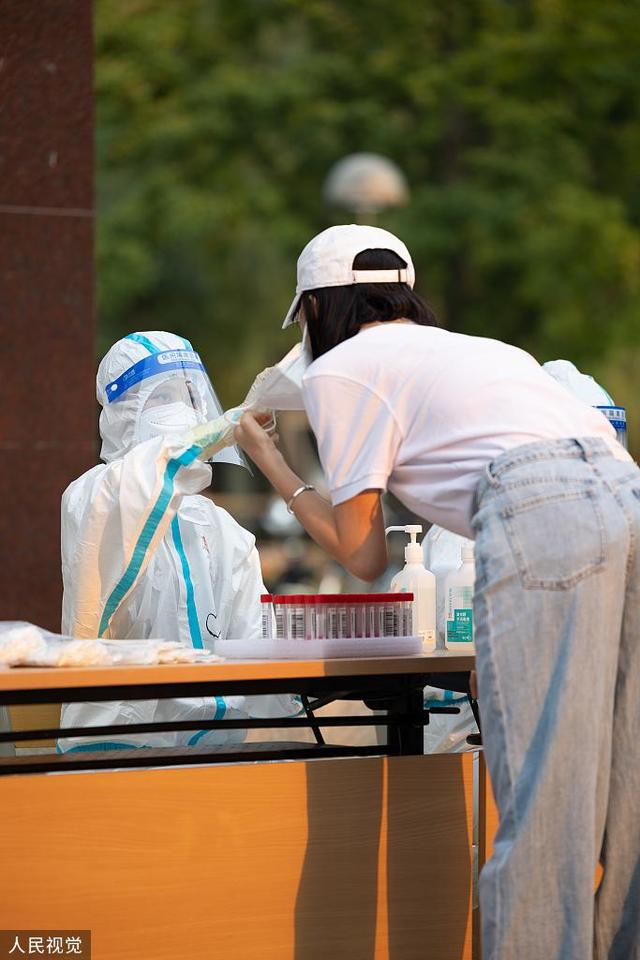 A student takes a COVID-19 nucleic acid test at a testing site inside the Communication University of China in Beijing, on Sept 10, 2022. (Photo: visual.people.cn)

"The cases, which are Omicron variants, belong to three different independent transmission chains," he said.

The Beijing city government reminded the public on Monday that students and workers should have negative nucleic acid test results from within 48 hours when returning to campuses and workplaces after the Mid-Autumn Festival holiday, as the city continues efforts to keep epidemic outbreaks under control.

"People should get tested twice during the following three days after returning to the capital," said Xu Hejian, spokesman of the municipal government, at a news conference on Monday afternoon.

"The recent three COVID-19 infection clusters that occurred in three schools in the city are all imported from cities outside of the capital," Xu said. "The infection risks to communities are controllable."

Wang Feng, vice-principal of the Beijing University of Chemical Technology, said at the news conference that 3,855 freshmen have completed online registration and online learning will start soon.

Previously, the college had postponed registration for the freshmen due to the outbreak on campus.

"The school has upgraded the network on campus to ensure the smooth running of large-scale online teaching and the teachers are ready to use multiple methods to increase communications with students during online teaching," he said.

In addition to the confirmed cases, the Communication University of China reported 13 new positive cases-all from quarantined locations, between midnight and 3 pm on Monday, according to Li Zhong, deputy Party chief of the university.

Li said 640 teachers and students had been transferred to centralized quarantine locations on Sunday and the test results of 13,150 people from the school were all negative.

"The school will start online teaching on Tuesday," he said.

In Chengdu, Sichuan province, which started citywide static management on Sept 1 due to the sudden epidemic outbreak, some districts, including Tianfu New Area and the high-tech industrial development zone, went back to normal on Monday having reported no cases in the past few days, according to the city's epidemic prevention and control headquarters on Sunday evening.