CHINA Can China help break the deadlock on the DPRK nuclear issue?

Can China help break the deadlock on the DPRK nuclear issue? 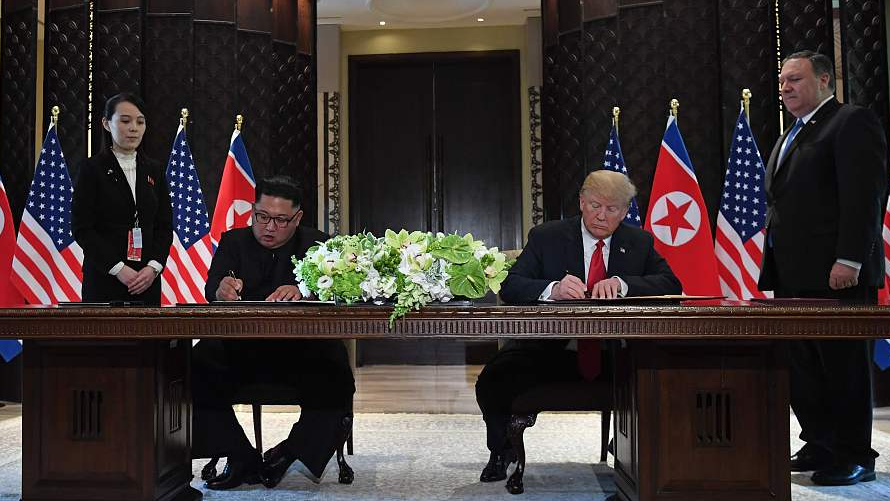 As Chinese President Xi Jinping said during his visit to the DPRK in June, relations between the two countries have entered a new era with a brighter future. Among the topics on the agenda, the two sides exchanged in-depth views on the nuclear issue on the Korean Peninsula.

The world has closely watched the ups and downs in nuclear talks between the United States and the DPRK, especially after the two sides restarted their first work-level talks since June after months of deadlock near the Swedish capital Stockholm on Saturday.

US Secretary of State Mike Pompeo said a lot of work needs to be done, adding that he hopes the DPRK "came with a good spirit and a willingness" to make progress, referring to the implementation of the commitment made between the two leaders in Singapore last June.

But top negotiator from the DPRK said late on Saturday that working-level nuclear talks in Sweden had broken off and the negotiations failed to "fulfill our expectations." He stressed that the DPRK stood "at the crossroads of dialogue or confrontation."

However, as an issue of world concern, many neglect that it is also a multilateral issue which other players including China may also matter.

What's the cause of the stalemate in nuclear talks?

US President Donald Trump and DPRK leader Kim Jong Un signed a joint statement at the Singapore summit where the two parties agreed on the complete denuclearization and the building of a lasting peace regime on the Korean Peninsula. Little implementation has been seen since then.

The sticking point mainly lies the definition of denuclearization and how it's achieved, said Wang Sheng, an expert on the Korean Peninsula issue and professor at Jilin University.

The DPRK proposes a "denuclearized Korean Peninsula" while the U.S. side puts its emphasis more on the DPRK instead of the whole region.

In terms of realizing denuclearization, the DPRK expects a "phased" and simultaneous approach, said Wang.

The DPRK sent several friendly signals after the Singapore summit. It halted nuclear tests, dismantled some of its nuclear facilities and returned remains of U.S. soldiers and three American citizens arrested in the DPRK, and waited for U.S. responding measures, such as lifting the economic sanctions imposed on the DPRK.

The United States, however, prefers a complete and verifiable denuclearization before it lifts sanctions and grants security guarantees to the DPRK.

The DPRK also demands a stop to the joint military exercises between the U.S. and Republic of Korea (ROK), calling for an official end of the Korean War and normalized DPRK-U.S. relations.

The U.S. downsized the joint military exercises and replaced the original "Key Resolve and Foal Eagle" joint military drills with the "Dong Maeng" exercise in March but refuses to give security guarantees to the DPRK unless it completely drops the nuclear weapons first.

Given the current situation, compromise from at least one side would be particularly significant in the negotiations. Wang believed that mutual trust and mutual respect to each other's national interests are the key to breaking the stalemate.

China, a key player in the Korean Peninsula nuclear issue

Among all the parties concerned in the Korean Peninsula nuclear issue, China's role is unique, irreplaceable and essential, said Wang, referring to China's phased and synchronized approach in settling differences.

Compared with U.S. proposed "Libya Model," China's approach encourages both countries to "show flexibility" and meet each other halfway. In Wang's opinion, it serves the common interests of the region, is more feasible and more likely to play a constructive role in settling the Korean Peninsula nuclear issue.

From the perspective of bilateral relations, Wang suggested that the break-up of the six-party talks and the stalled nuclear talks between the DPRK and U.S. all reveal the deep misunderstandings and mistrust that lie between the two countries and hamper their ability to implement their commitment.

Under such circumstances, a third party is necessary to serve as a "mediator" that can help create favorable conditions for dialogue and enhance confidence in negotiations, said Wang. China is the ideal candidate.

Also, Wang believed that China's traditional friendship and close ties with the DPRK can help enhance its confidence in denuclearization and shift the country's strategic focus to economic construction.

Speaking of the prospect of the Korean Peninsula nuclear issue, Wang held that the frequent high-level exchanges between leaders of the region and the resumption of the nuclear talks as positive signals which indicate that the issue has entered a new stage featuring peaceful negotiation and political solution.

"A denuclearized Korean Peninsula is the trend of time," Wang said, "but if the two sides fail to take equivalent actions to show their sincerity, it's still possible the situation on the peninsula gets reversed."

Yang Xiyu, senior fellow at the China Institute of International Studies, holds similar views. He noted that China-DPRK friendship, which has gone through the Korean War, the Cold War and the post-Cold War era, are of great significance not only for both sides but also for the "international arena."

"Based on the two goals, the cooperation and friendship between the two sides contribute to the stability and progress of denuclearization (on the Korean Peninsula)," he told CGTN.