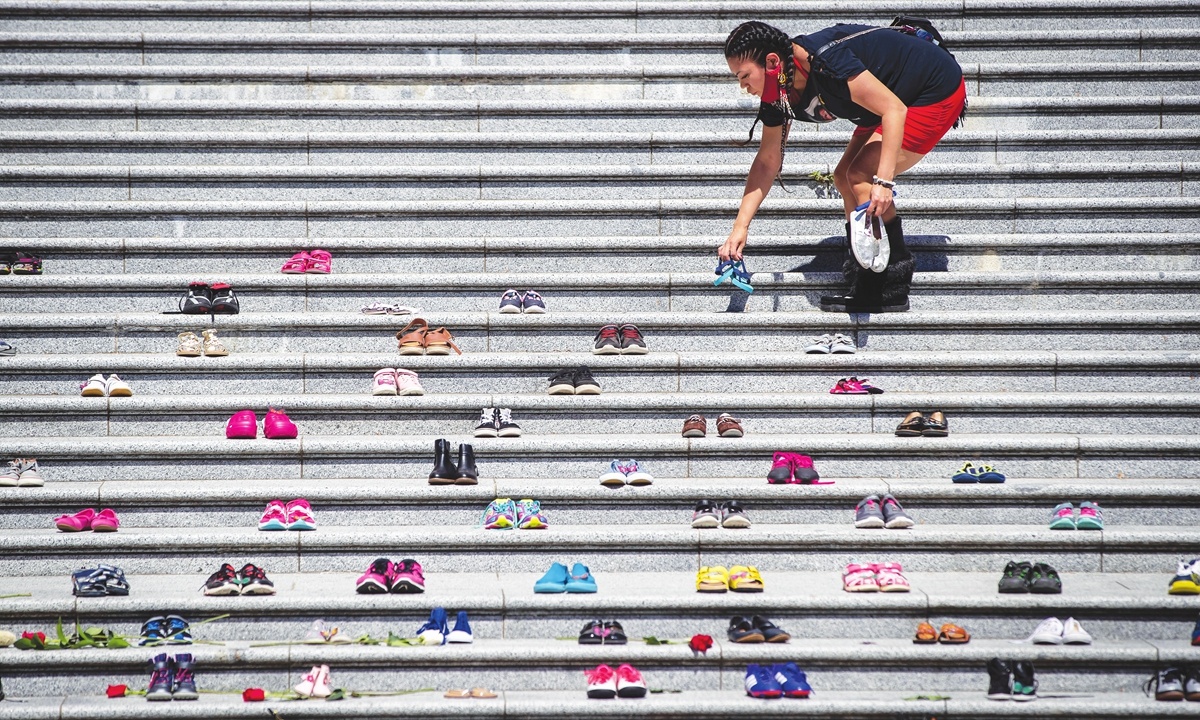 Lorelei Williams puts one of 215 pairs of children's shoes on the steps of the Vancouver Art Gallery. (Photo: VCG)

Canada is unqualified to criticize China. They have to reflect on their own misdeeds on human rights, Zhao Lijian, Chinese Foreign Ministry spokesperson, told a press conference on Wednesday, responding to Canadian Prime Minister Justin Trudeau's remarks over topics of China's Xinjiang Uygur Autonomous Region.

Recently, the remains of 215 indigenous children were found in a former residential school in British Columbia. Zhao said, "We have noticed that although the Canadian government has expressed that it is 'heartbroken' for the 'shameful' chapter, it shifted responsibility to the Church, saying that the Catholic Church is blocking the investigation and urged it to take responsibility."

"Such kind of crocodile tears exposed the Canadian government's hypocrisy and showed it lacks courage and sincerity to face its own misdeeds on human rights. It also worried the public for whether the situation of the indigenous people in Canada would be improved," said Zhao.

Canada is no better than its neighbor when it comes to systematic discrimination against ethnic minorities. Since the outbreak of the COVID-19, discrimination and violence targeting Asians have increased in Canada, Zhao said, noting that data showed that from March 2020 to February 2021, more than 1,000 violent cases targeting Asians happened in Canada. This was surprisingly higher than in the US if calculated in proportion of population in comparison with the US. Similar cases increased 717 percent, 600 percent and 400 percent respectively in Vancouver, Ottawa and Toronto in 2020.

Zhao also noted that in recent years, many African citizens were victims of police violence in Canada. Crimes out of hate and discrimination against Muslims are rampant in Canada. According to data from Canada, crimes targeting Muslims increased 151 percent in 2017.

In facing with the blatant race discrimination and infringement of human rights, the Canadian government has failed to take measures to improve the situation or to protect ethnic minorities' interests, Zhao said.

After the discovery of the 215 bodies of indigenous children, the special rapporteurs of the UN Human Rights Council made a joint statement to urge Canada to make thorough investigation into the matter and they said victims have the rights to get justice and compensation.

"Now we want to ask: When to make the investigation? How to make the compensation? And when to make measures to deal with the systematic race discrimination?" Zhao asked.