The decision of the Corner Tower Restaurant of the Palace Museum to cancel a $970 "reunion dinner" during Spring Festival a few days after it made the offer has raised heated discussions on the internet. 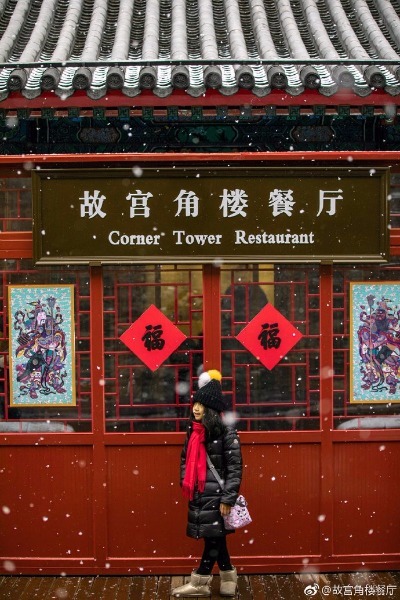 The restaurant appeared on the top search list on Sina Weibo twice over the past five days, raising debates on whether the Palace Museum should be commercialized.

On Sunday, the restaurant got onto the hot topic list by announcing a "reunion dinner" from Jan 17 till Feb 8, the Lantern Festival.

There were only three tables to be served each day.

On Wednesday, the restaurant's decision to cancel the dinner raised another round of discussions.

The two pieces of news have been discussed more than 50,000 times together on weibo and read more than 1 billion times.

The Corner Tower Restaurant lies at the north of the Gate of Divine Prowess (Shenwu Men) outside the Palace Museum. It serves fast food featuring traditional Beijing cuisine including pancake with roasted Peking duck and noodles with soybean paste.

The price of the reunion dinner was questioned by netizens. Some wondered whether the dining experience is worth such a high price, while others thought it was quite fair considering the unique location, occasion and culturally added value.

The dinner was meant to serve small hotpots on induction stoves for each guest. A piece of chrysanthemum from Anhui province, which is said to have been a favorite of the Empress Dowager Cixi (1835-1908), was to be included in the soup base, which would have also consisted of chicken from Changbai Mountain and fish slices from the Songhua River.

Besides lamb from Sonid Left Banner, Inner Mongolia autonomous region-which is generally served in honor of the emperors since the Yuan Dynasty (1271-1368)-some premium ingredients that even Cixi hadn't tasted were also on the menu, including abalone from New Zealand and 1.5-kilogram lobster from Australia.

Zhang Yujie, a food critic in Beijing, thought the price was not that high for a reunion dinner on the night of Spring Festival.

"Considering the quality of the ingredients and the dinner prices in Beijing, the price of the dinner is quite fair," Zhang said.

The reunion dinner on the Spring Festival at five-star hotels in Beijing such as Nuo Hotel, Sunrise Kempinski, Puxuan Hotel, and the Opposite House all charge around 600 to 800 yuan per person.

On Monday, the restaurant staff told China News that the reservations were fully booked.

According to Ifeng news on Wednesday, Chen Wenqiang, an employee of the Corner Tower Restaurant, said that all "reunion dinners" had been canceled and booking fees of 2,000 yuan had been returned.

So far, the restaurant has not given an official explanation for the cancellation.

Commenting under Ifeng's poll, some netizens think the restaurant did not have the heart to continue the promotion.

During the last Spring Festival, the restaurant launched a hotpot, and people lined up for three hours to try it. The move sparked discussions by netizens about whether it was appropriate to make hotpot next to the Palace Museum, considering the preservation of the cultural relics there.