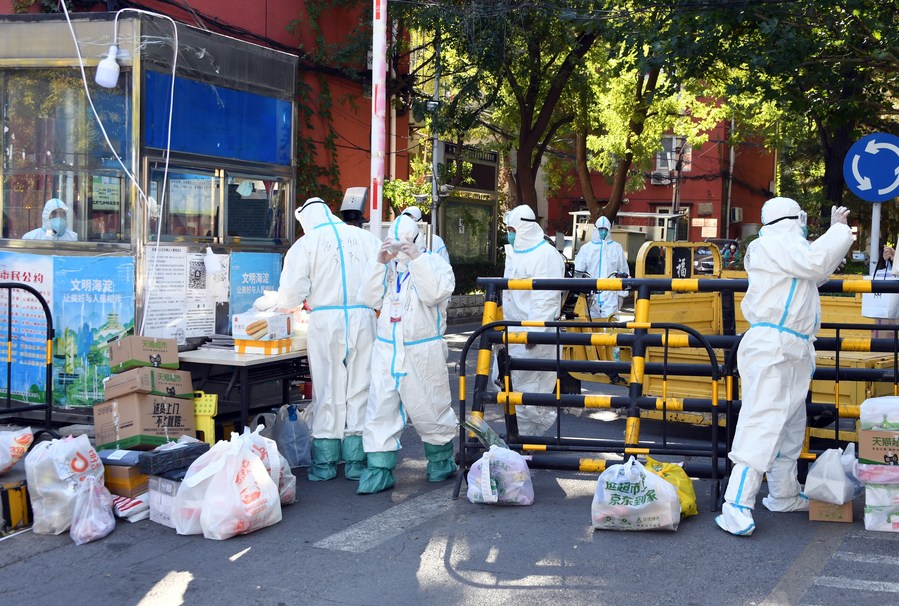 Beijing is still facing a complicated epidemic control situation and safety precautions on all forms of transportation need to be strengthened to reduce infection risks, a senior official said on Monday.

"As temperatures fall in winter and small outbreaks continue to occur in many places around the country, people should be aware of the risks and act with caution," Pang Xinghuo, deputy director of the Beijing Center for Disease Control and Prevention, said at a news conference on Monday.

Residents who have traveled outside the city should postpone their return if they have visited locations where confirmed cases have been reported during their travel period, the city government said on Monday. These locations include residential communities, shopping malls, supermarkets, airports and railway stations, according to the Beijing Health Commission.

People who have already returned to Beijing should report their movements to local communities and their employers, the commission said.

The city government is asking residents not to leave Beijing unless absolutely necessary after the COVID-19 outbreak hit 16 provincial-level regions.

Tang Yunhua, deputy head of Beijing's market supervisory authority, said employees in industries including agriculture produce markets, cold-chain food storage, restaurants, canteens, bars, supermarkets, hair salons, express delivery and housekeeping need negative nucleic acid test results to be allowed to work. The negative result will allow them to work for a 14-day period before they have to be tested again.

Drugstore workers should have a negative nucleic acid test result every seven days, she said at the news conference.

The city will conduct monthly nucleic acid tests on produce market workers and cold-chain food industry employees, as well as people living with them, to cut potential infection risks.

Entertainment venues are being asked to step up epidemic control measures, with many cinemas and internet cafes in Beijing's center temporarily closed.

Theme parks have also tightened epidemic control and prevention measures to prevent the spread of the coronavirus.

The Universal Beijing Resort and the Shanghai Disney Resort are both providing on-site nucleic acid testing.

The Beijing resort set up a nucleic acid testing spot for visitors at a nearby subway on Sunday afternoon.

The Shanghai resort conducted massive on-site nucleic acid tests on Sunday evening and announced temporary closures to cooperate with an epidemic probe linked to other provinces.

The Chinese mainland on Sunday reported 59 new locally transmitted COVID-19 cases, the National Health Commission said in its daily report on Monday. Of the new cases reported in the provinces, 27 were in Heilongjiang, 10 in Gansu, nine in Hebei and one each in Zhejiang, Jiangxi, Shandong and Qinghai, the commission said. Six cases were reported in the Inner Mongolia autonomous region and three in the Ningxia Hui autonomous region.