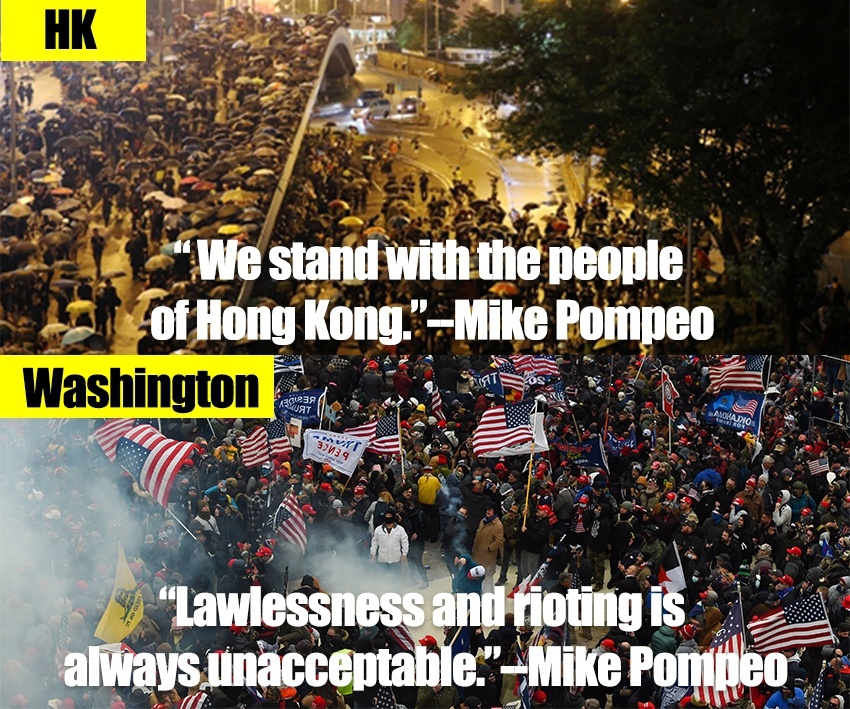 The violent and chaotic scenes on Wednesday night from Capitol Hill, during which four people died including one shot by US Capitol Police, reminded many Chinese of riots at the LegCo building in Hong Kong in 2019, but the Hong Kong Police Force (HKPF) reacted totally differently with the maximum restraint, some netizens said.

While western politicians and media outlets have accused the HKPF of police brutality, no anti-government protester was killed when the Hong Kong legislature building was vandalized, or during the nine months of protests that often turned into citywide rioting and social turmoil.

Many Chinese netizens said they could not even understand such double standards. “How could the violence be acceptable when it occurs at the doorstep of the others, but when the fire broke out in their own house yard, they would immediately extinguish it?” they asked.

A Hong Kong police officer who had enforced the law during the months of anti-government protests in 2019, saw similar violence in Washington with Capitol Hill police pointing guns, barricading doors during the standoff with pro-Trump protesters, told the Global Times that “the HKPF was too gentle, and reacted with maximum restraint.”

“And such gentleness led to more chaotic situation in Hong Kong,” Lau Chak-kei, a police sergeant, told the Global Times on Thursday.

Lau was filmed raising the shotgun during an illegal protest in July 2019 but the western media distorted narrative showed him as a brutal repressor by pointing a gun at so-called “peaceful protesters,” which was used by the West as so-called “evidence” to condemn police brutality in Hong Kong.

The Western media ignored the fact that Lau was surrounded by a group of black-clad protesters who violently attacked him. At the Capitol, even before the protesters approached the police, they were dispersed by guns and tear gas.

Such a vivid playbook fully underscores the West double standards on the Hong Kong social unrest. The major concern for the HKPF was people’s lives, and that’s why they remained restrained at the maximum level and retreated, some Chinese netizens said: “How could it be called as ‘brutality?’”

“It’s time for American political double standards to stop,” Cyrus Janssen, a YouTuber who closely observes current affairs in China, told the Global Times. “If these events happen in China, it’s fine, but inside America, they of course, are not acceptable,” he said.

“Lawlessness and rioting -- here or around the world -- is always unacceptable,” US Secretary of State Mike Pompeo said after the storming of the US Capitol, but when it comes to the rioting activities in Hong Kong in 2019, Pompeo said “we stand with the people of Hong Kong.”

Some Hong Kong anti-government protesters shared complex feeling about the chaos at the US Capitol, as they have been seeking the support of US politicians during the months of social turmoil, even asking for sanctions against the Chinese government.