After releasing short videos about how to produce exquisite and ingenious woodworks, An Xu, a carpenter born in the late 1990s from southwest China's Guizhou province witnessed the number of followers on his social media account surpass 9 million in a mere two year period. 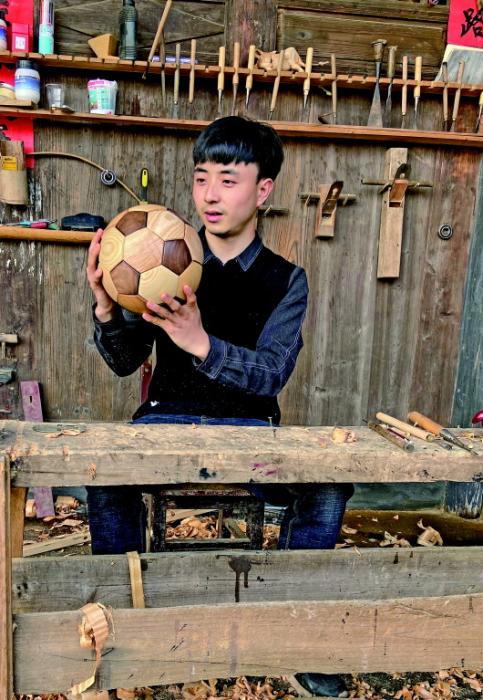 An Xu holds up a wooden football he produced by himself. (Photo courtesy of the interviewee)

An’s fascination with art dates back to his childhood when he fell in love with painting. Walls in his home and blank spaces in his textbooks were all a canvas for the little boy and eventually they got filled in with various drawings.

An has worked as a car mechanic, car washer and a clerk in a milk tea shop in the past; however, none of these jobs intrigued the young man. In 2019, An, at the suggestion of his mother, finally decided to become an apprentice under a skilled carpenter named Huang Dong and began to get engaged in this trade.

An was so talented at carpentry that it only took him three months to master a complete set of skills in making some of the furniture that many others would have spent years to perfect. Despite having such a gift, An never ceased in sharpening his craftsmanship, and he never hesitated to consult online teaching videos or professional textbooks when a technical difficulty arose.

In the eyes of An's wife, Wang Shuangyu, her husband has always sought a high degree of perfection in his beloved carpentry work.

"One of the most viewed video clips that I shared online was about making a bracelet for my mom. She had never bought a piece of jewelry and I wanted to cheer her up," An said, adding that he earned up to 400,000 yuan ($61,760) over the past two years, including advertising revenues and income from sales of wood crafts.

"I want to learn from another video blogger, Li Ziqi, as she has helped to disseminate Chinese culture," noted An whose original intention in sharing a video clip on how to produce a wooden sword online was to earn some money. However, now what he is prioritizing is how to best preserve and carry forward traditional Chinese carpentry skills.

In fact, thanks to An's efforts, more and more netizens have benefited from an enhanced understanding of the culture of Chinese carpentry. Some even contacted An in the hope of learning some of his fundamental carpentry skills. Meanwhile, a secondary vocational school in the county seat also invited An to serve as a teacher in their woodworking classes.