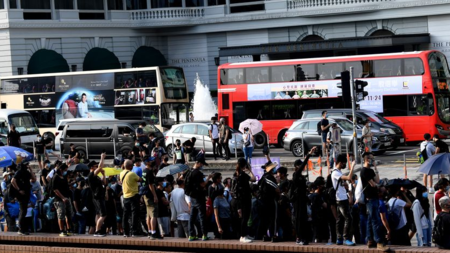 HONG KONG, Nov. 15 (Xinhua) -- A carriageway near the Chinese University of Hong Kong (CUHK) that had been blocked by rioters was partly reopened on Friday noon, the Hong Kong police said.

After being maliciously blocked for over 60 hours, parts of the southbound and northbound Tolo Highway was reopened as the police and other government departments made immense efforts to clear the debris thrown by rioters from a bridge over the highway.

The police appealed to all members of the public not to throw any object off the bridge or conduct any illegal acts posing threat to road users. Due to the current situation, drivers are advised to stay tuned when they pass by the location concerned.

For days, rioters have been inflicting extensive damage on various districts and blocking multiple key public routes and harbor-crossing facilities in Hong Kong, posing a serious threat to public safety and order.

The police said earlier Friday that the carriageway remained blocked by miscellaneous objects and shattered glass in the morning despite that the rioters claimed to reopen part of it at around 6:00 a.m.

When the relevant government departments attempted to clear the debris on the highway, some rioters used bows, arrows and other hard objects to intimidate the contract workers, the police said.

Mable Chan, the commissioner for transport of the Hong Kong Special Administrative Region government, confirmed that the work of cleaners and maintenance workers to clear the roads was obstructed by the rioters and forced to a standstill for a while on Friday morning.

Chan said she strongly urged the rioters to take into account public travel and road safety and to avoid causing disruption to public transport.

Masked rioters started to wreak havoc to the CUHK campus in Sha Tin in the New Territories on Monday, and kept dropping objects from a bridge over Tolo Highway to obstruct traffic on the carriageway, seriously obstructing emergency services and movement of residents in the New Territories.

Police officers were deployed to guard the bridge on Monday and Tuesday to protect public safety, but were violently charged by rioters gathering on the campus. Representatives of the CUHK asked the police to retreat out of the campus and for multiple times promised they would arrange for the rioters to retreat.

The police on Friday expressed deep regret that the rioters continue to paralyze transport network and blatantly disregard public concern, and once again appealed to the CUHK to keep their promise and help restore social stability and road safety.