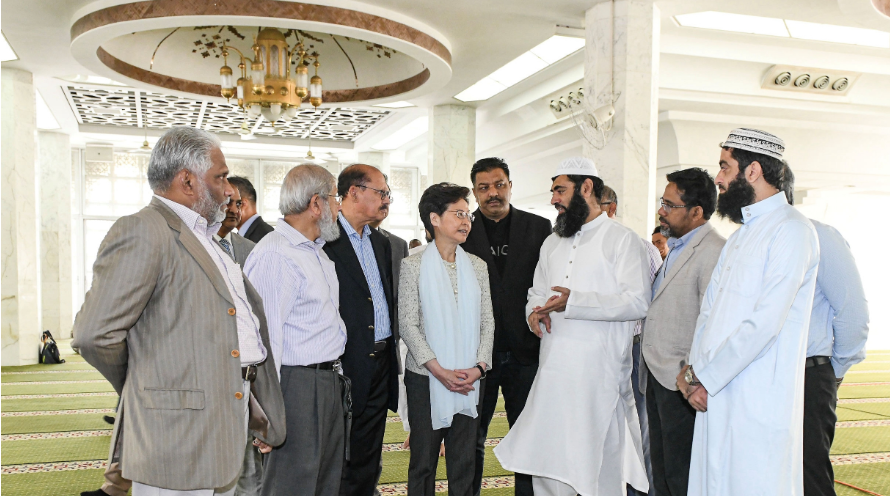 Hong Kong's Chief Executive Carrie Lam (C) visits the Kowloon Masjid and Islamic Centre in Tsim Sha Tsui to meet with representatives of the Incorporated Trustees of the Islamic Community Fund of Hong Kong and other leaders of the local Muslim community, in Hong Kong, China, October 21, 2019. (Photo: CGTN)

Hong Kong police apologized on Monday to the city's Muslim community after they hit a major mosque with water canon when dispersing rioters in Kowloon on Sunday.

According to the statement, Hong Kong Chief Executive Carrie Lam and Hong Kong's Commissioner of Police Lo Wai-chung have visited the mosque on Monday to extend their apology to the Muslim leader.

The statement reiterated that the police has no intention to offence any religious group in Hong Kong, adding that the Muslim community in Hong Kong always respects the rule of law and has maintained good relations with the police.

Hong Kong police will respect the freedom of religion and protect all the religious groups in its best capacity.

Their apology was accepted by the Muslim Council of Hong Kong, which clarified in a statement that the city's biggest mosque was not police's intended target, calling on Hong Kong residents to "seek calmness over revenge" and avoid "making the situation worse."

In one instance, a cannon drenched the front gate and steps of the Kowloon mosque, the biggest mosque in Hong Kong, with the dye.

Both the police and the protesters apologized for the incident.