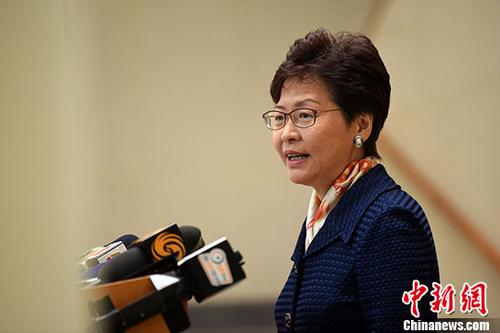 The Greater Bay area covers Hong Kong and Macao special administrative regions, and nine cities in Guangdong Province, including the first-tier cities of Guangzhou and Shenzhen.

Lam said cities in the area are complementary in terms of innovation, technology and commercial activities, while Hong Kong is expected to play a very important future role due to its position as an international financial center and long history of engaging with the global commercial community.

Hong Kong will introduce more policies to attract scientific talent to settle in the city, according to Lam.

Hong Kong intends to build itself into a world-class innovation and technology center by making use of its advantages including famous universities and R&D strengths. Shenzhen, Foshan, Dongguan and other cities in the area can realize the manufacturing processes needed, it was added.

She called on Hong Kong’s young people to have a broader perspective and seize opportunities from the Greater Bay Area amid globalization of the economy.

“Only if you understand the outside world first, will you have the courage to go out,” she said.