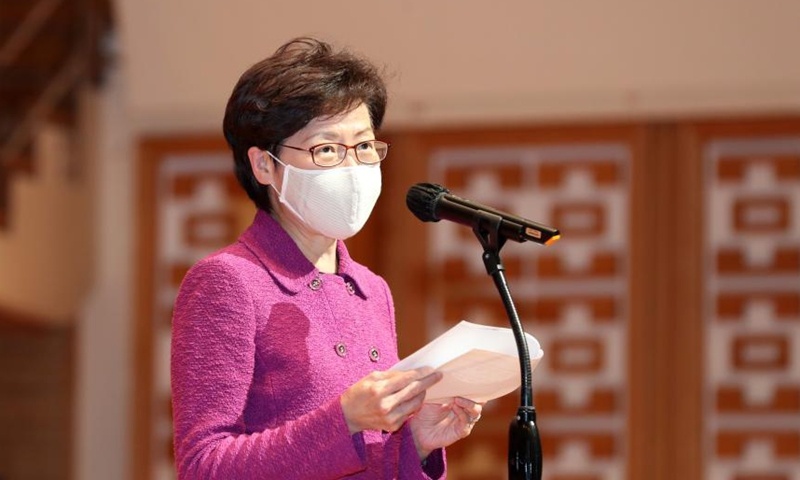 Chief Executive of the Hong Kong Special Administrative Region (HKSAR) Carrie Lam vowed to directly oversee the SAR's three Legislative Council (LegCo) elections in the coming year to guarantee there is no foreign intervention, after the city officially adopts electoral reform in March.

"The government must do a good job in the next three elections over the next 12 months," Lam stressed in a recent interview with local newspaper Ta Kung Pao, adding that time is very tight but the work is too important, so she will personally supervise every part of the elections.

Amendments to more than 20 pieces of primary and subsidiary legislation are expected to take place in the coming year, part of which is to "trigger the whole body," Lam said, adding "This is an important ordinance requiring flexible time to consider."

The National People's Congress (NPC), China's top legislature, passed the decision on improving the HKSAR's electoral system in a landslide vote on March 14, clearly stating their determination to carry out the reform.

Lam noted that in recent years, there have been certain politicians with ulterior purposes who have gained posts in the Hong Kong government by exploiting loopholes in the electoral system. But instead of assisting with the government's work, those politicians carried out sabotage, and even assisted foreign forces to interfere in the city's affairs.

Lam said she is undaunted by possible further sanctions from foreign governments. "At this turning point in history, it is an honorable mission as an official of the HKSAR to be able to have some influence on the protection of national security," said Lam.

Whether it is Hong Kong's national security law or electoral reform, they can provide the city with a more stable environment both as an externally oriented economy and as a business city, Lam said.

Lam also said she has not considered the matter of seeking re-election. "I really think there is still a huge amount of work to be done now [before considering that question]," she said in an interview with Phoenix TV.