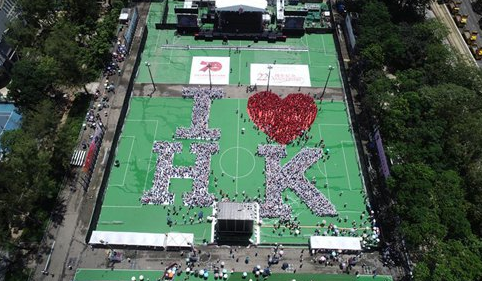 The aerial photo was taken on July 1, 2019, shows a formation that spells out the words "I LOVE HK" to celebrate the 22nd birthday of the Hong Kong Special Administrative Region in Hong Kong. (Photo: Xinhua)

Chaos and violence again descended on Hong Kong this weekend as the city's festering social unrest entered its 22nd week.

Tension flared during the weekend as rioters smashed up an office of the Xinhua News Agency, which experts said trampled over the city's freedom of speech in defiance of the central government.

They predicted the violence will escalate ahead of the city's upcoming district council elections.

Seven districts were engulfed by skirmishes between police and rioters on Sunday afternoon, as shops including Yoshinoya, Maxim's and other companies were vandalized.

Police ordered Tamar Park closed after rioters issued an online announcement of an illegal gathering there on Sunday afternoon.

About 4 pm, a masked mob, some wielding fire extinguishers, vandalized facilities like turnstiles and smashed up glass panes of a customer service center in Sha Tin MTR station, the police said.

Those actions followed Saturday's protests which involved assaulting police officers and vandalism of public buildings including the Asia-Pacific Regional Bureau office of the Xinhua News Agency.

Police said on Sunday more than 200 people were arrested who took part in the Saturday protests.

On Saturday evening, the Xinhua office in Wan Chai was attacked for the first time, with its glass doors and windows smashed.

A Hong Kong-based commentator who only gave his surname as Ho told the Global Times that the fire was contained in time and did not cause any extensive damage.

Xinhua issued a statement later saying it was "strongly indignant" over the "barbaric act" and hoped the police seriously investigate the incident.

Targeting the Xinhua News Agency showed the rioters' grudge toward Chinese mainland organizations was tinted with an obvious political agenda, said Chen Xinxin, a researcher with the Chinese Academy of Social Sciences in Beijing.

The Xinhua's Hong Kong office made a special contribution to Hong Kong's return to the motherland and so has symbolic meaning, Chen believed.

The vandalism was in obvious defiance of the central government and mainland organizations, he noted.

"The move in some way also threatened the city's freedom of speech… and is another infringement of Hong Kong's law," Chen said.

The Beijing-based All-China Journalists Association, the Hong Kong News Executives' Association both issued statements after the incident condemning the attack and demanding police look into it.

The Hospital Authority of Hong Kong said Sunday morning that 54 people were injured and taken to hospital during Saturday's protests and one man was in a serious condition.

According to a video clip circulating on local Hong Kong media, a group of black-clad rioters hit a man in Mong Kok and beat him to the ground, ripping off his underwear and leaving his face covered with blood.

On Twitter, Hong Kong police described the act as "heinous."

The man's identity remained unknown as of press time.

According to Hong Kong police, rioters defied a police ban and illegally gathered at Victoria Park 2 pm on Saturday and the illegal gathering evolved into mass vandalism and violence.

The Hong Kong commentator Ho said he noticed that Saturday's violence was upgraded from previous ones.

"Previous riots usually start late and climaxed at 10 pm," said Ho. "But yesterday's violent protests started early in the afternoon, which obviously posed a greater challenge for the police to contain."

Another Hong Kong-based commentator who requested anonymity told the Global Times that with the looming Hong Kong district council elections this month, violent protesters intended to upgrade their violence, paralyze the city government and enlarge their influence.

The anonymous commentator said his conclusion was based on the rioters expanding the targets for their violence to include Xinhua office for the first time.

Hong Kong police confirmed to the Global Times that Andrew Chiu, a district counselor, was attacked on Sunday's clash and his ear was bitten off.

After concluding her visit to Shanghai to attend the Second China International Import Expo on Tuesday, Hong Kong's Chief Executive Carrie Lam will depart for Beijing in the evening, the city government said in a statement on Sunday.

The next day she will be received by Vice Premier Han Zheng. Lam will attend the third plenary meeting of the Leading Group for the Development of the Guangdong-Hong Kong-Macao Greater Bay Area (Leading Group).

The Leading Group, led by Han, held the first plenary meeting in August 2018 and the second in March this year where they endorsed measures to facilitate Hong Kong people to develop, work and reside in mainland cities of the Greater Bay Area.

Such a move would help Hong Kong out of the current difficult situation and solve deep-rooted social problems including Hong Kong's development within the Greater Bay Area, Tang believed.

He noted that Han's meeting with Lam also would serve to dispel rumors that Beijing planned to replace Lam.

"It shows the central government's strong support for Lam," he said. "It is very important to stabilize morale when the most urgent task for Hong Kong is to ease the violence."

Hong Kong slipped into a technical recession as its economy shrank 3.2 percent in the third quarter from the previous quarter amid ongoing social unrest, the city's census and statistics department said on Thursday.

The decline between July and September followed a 0.4 percent drop in the second quarter, marking a fall in two consecutive quarters.