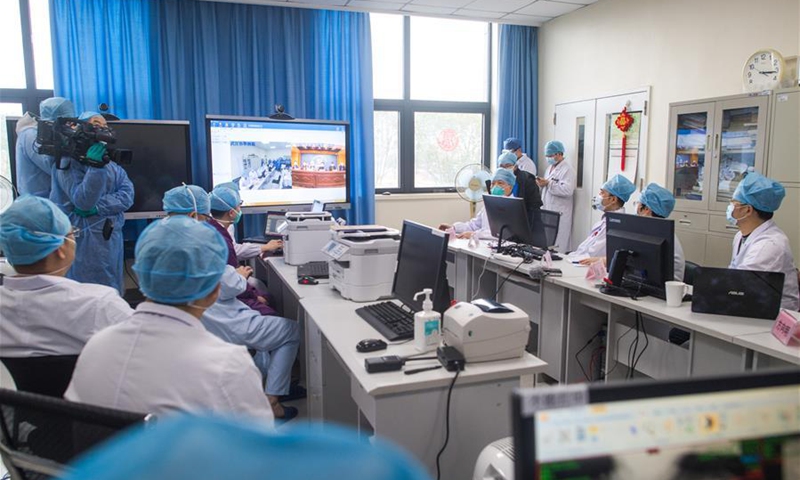 More positive signs have emerged as cities nationwide have enhanced measures to contain the novel coronavirus outbreak, sparking more speculation on when the inflection point would come. Some analysts urged continuous vigilance as it is still too early to draw a conclusion due to lack of effective therapeutics against the virus.

Daily reported new infections continued to decline for the eighth straight day outside Central China's Hubei Province, where the epicenter city of Wuhan is located. Newly confirmed cases in Wuhan also dropped below 2,000, the lowest since the start of February, according to official data on Wednesday. The death rate also appeared to slow with an improving recovery rate.

China's National Health Commission said on Wednesday that the number of daily confirmed novel coronavirus pneumonia cases has seen a 48.2 percent decline between February 4 and Tuesday. Mi Feng, spokesperson of (NHC), said during a routine press conference that although the country still faces a severe outbreak situation, after authorities launched a series of effective measures, some positive signs have emerged. Meanwhile, the overall recovery rate has been improving in the past few weeks.

The cure rate has exceeded 10 percent, increasing from 1.3 percent on January 27 to 10.6 percent on Tuesday, the NHC said on Wednesday. Some 744 patients were discharged from the hospital on Tuesday. In Southwest China's Tibet Autonomous Region, there was only one confirmed case, and the patient was discharged from the hospital on Wednesday, leaving no case of infection in the region.

An advance team of WHO medical experts had already arrived in China on Monday to assess the outbreak while the organization held a meeting in Geneva on Tuesday and  Wednesday with more than 400 scientists from around the world to coordinate the response to this disease, which WHO director Tedros Adhanom Ghebreyesus considers as a new disease that the public may only be seeing "the tip of the iceberg."

While some Chinese analysts hold an optimistic view that the inflection point would soon emerge, the central government's top medical adviser Zhong Nanshan said the turning point of the epidemic is still difficult to predict.

Zhong said the epidemic peak may appear by mid- to late-February. And in an interview with Reuters on Tuesday, Zhong said he hoped "this outbreak or this event may be over in April."

His opinion is being debated among international scientists, with some saying it's still too early to reach a conclusion.

Warmer weather will reduce the virus' ability to spread and bring people out of enclosed spaces where it is transmitted more easily, Ian Lipkin, director of Columbia University's Center for Infection and Immunity, said in an online news conference on Sunday, AP reported.

But Lipkin also pointed that if new cases spike as more people return to work after the holiday, then "we'll know we're in trouble."

Zeng Guang, chief epidemiologist at the Chinese Center for Disease Control and Prevention (CDC), said on Wednesday that inflection point is just a concept for a specific time and people should not simply think that arrival of an inflection point means the situation is certain.

Rising infections could occur as 160 million Chinese people are still expected to return to cities to resume work in the coming days, with mounting pressure weighing on areas like the Pearl River Delta, Yangtze River Delta and Beijing-Tianjin-Hebei region, which will pose challenges to prevention and control work, the expert said.

The Shenzhen Institutes of Advanced Technology of the Chinese Academy of Science Wednesday said they had finished the first-phase of a backup vaccine to treat the coronavirus.

The WHO said the development of vaccines and therapeutics is one important part of the research agenda and countries should come together to fight this disease which may have further implications on the global economy.

Lipkin, who recently returned to the US from a visit to China amid the outbreak where he met Zhong, said most of their focus now is on developing diagnostic tests that can be used to determine who should be isolated, how long they should be isolated, and decisions about drugs and antibodies that can be used even now to reduce morbidity and mortality.

In recent days, Hubei has been accelerating to process the samples, giving more accurate numbers of suspected and confirmed cases. The local authority has shipped 180,000 nucleic acid test kits for the diagnosis of coronavirus infection, distributing more than 90,000 kits to relevant laboratories. So far, Wuhan has 40 labs that can conduct 8,000 to 10,000 tests daily.

The first vaccine could be ready in 18 months, Ghebreyesus said at a press conference on Tuesday.

The development of vaccines and therapeutics is one important part of the research agenda - but it is only one part. They will take time to develop, but in the meantime, we are not defenseless, Ghebreyesus was quoted as saying in a statement the WHO sent to the Global Times.

He said there are many basic public health interventions that are available to us now which can prevent infections.

However, there is a shortage of antiviral drugs in the market, the Global Times learned.

"Antiviral drugs, especially some Chinese patent medicines that are recommended by medical experts, are scarce at drugstores," a chief doctor of the emergency department of a hospital in North China's Shanxi Province told the Global Times on Wednesday.

He added that when he suggested his patients buy antiviral drugs, he was told that the Chinese patent medicines were sold out at many stores. "The supplies of other medicines are available."

To address this problem, drug companies in China try to meet the demand.

Workers of a Chinese patent medicine factory in Shanxi started producing medicine on Monday, Wang Jinqing, one of the employees of the factory, told the Global Times on Wednesday.

"We are enhancing production of a kind of Chinese patent medicine to donate to Wuhan's hospitals," Wang said. The medicine he mentioned has been included in the fifth guidebook on treating the COVID-19 and has been recommended as part of medicines to patients in critical conditions.

Traditional Chinese medicine can also achieve an effect on the patient at the early stage of the disease, Zhang Tao, leader of a medical personnel supportive team from East China's Shandong Province to Hubei, told a press conference on Tuesday.

A type of herbal medicine soup has proven effective for 90 percent of the COVID-19 patients, as revealed by clinical observations, the National Administration of Traditional Chinese Medicine said.