CHINA CDCs in China aim to vaccinate 40% of local population by June, 80% by year's end

CDCs in China aim to vaccinate 40% of local population by June, 80% by year's end 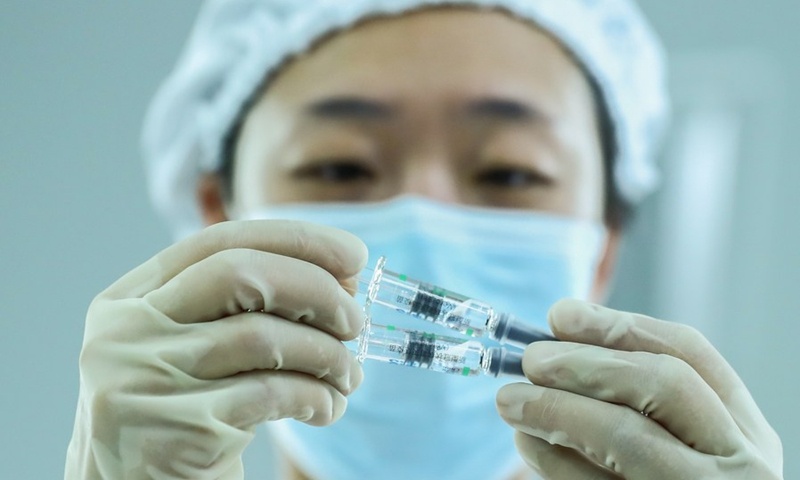 Some Chinese cities and provinces including Shanghai and Anhui have set a target to vaccinate 40 to 50 percent of the local population by the end of June, and 80 to 90 percent by the year's end, staff of the local Centers for Disease Control and Prevention (CDC) told the Global Times.

Their targets are part of the national vaccination plan, they said. China has a national population of 1.4 billion.

This comes after China's top medical advisor Zhong Nanshan said Monday that China aims to increase domestic vaccination target to 40 percent by June. By the end of February, 52.5 million doses of COVID-19 vaccines had been administered, according to Zhong.

Local CDCs of Shanghai and Anhui Province have been asked to vaccinate at least 40 percent of the local population by the end of June and at least 80 percent by the end of December. Even though this is a difficult target, there is confidence that the goal will be achieved, an Anhui CDC employee told the Global Times on condition of anonymity on Tuesday.

A Shanghai CDC employee also said the city's vaccination program will be reviewed to meet the new target.

Currently China has a vaccination rate of 3.5 percent.

Experts say this is a challenging goal to achieve under the current shortage of vaccine supplies and tight vaccination facilities.

According to the Anhui CDC employee, only 1.5 million doses have been administered to a population of more than 60 million in the province. The biggest challenge is the lack of vaccination sites and staff, which requires more investment and resource mobilization.

Experts also expressed their concerns about insufficient domestic vaccine production to meet the target, considering that some batches have been offered to other countries. However, it is likely that China will increase vaccine production in the next three months and may import some vaccines from other countries to replenish supplies, Tao Lina, a Shanghai-based vaccine observer, told the Global Times on Tuesday.

Another concern is that people who received earlier doses six months ago might have already lost the immune response to the virus, given that the long-term protective effects of the COVID-19 vaccine is still under study.