Hong Kong Chief Executive Carrie Lam Cheng Yuet-ngor on Wednesday morning delivered a speech at a reception held in celebration of the 23rd anniversary of the establishment of the Hong Kong Special Administrative Region at the Hong Kong Convention and Exhibition Center. 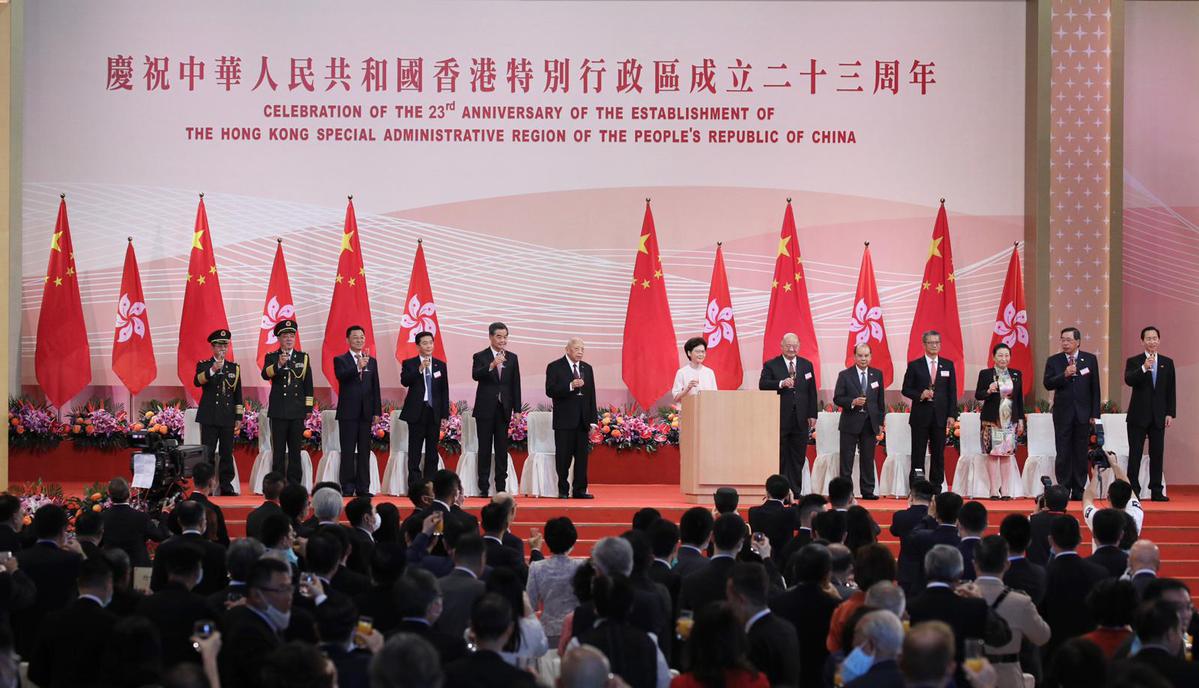 Hong Kong Chief Executive Carrie Lam Cheng Yuet-ngor, center, together with other government officials and dignitaries, make a toast at a reception following a flag-raising ceremony held to mark the 23rd anniversary of Hong Kong's return to the motherland. In Hong Kong on July 1, 2020. (Photo: China Daily)

The following is the full text of the translated version of Lam's speech:

Today marks the 23rd anniversary of the establishment of the Hong Kong Special Administrative Region (HKSAR) of the People's Republic of China (PRC). It is a day of great historical significance and it gives me much pleasure to celebrate the occasion with you together. 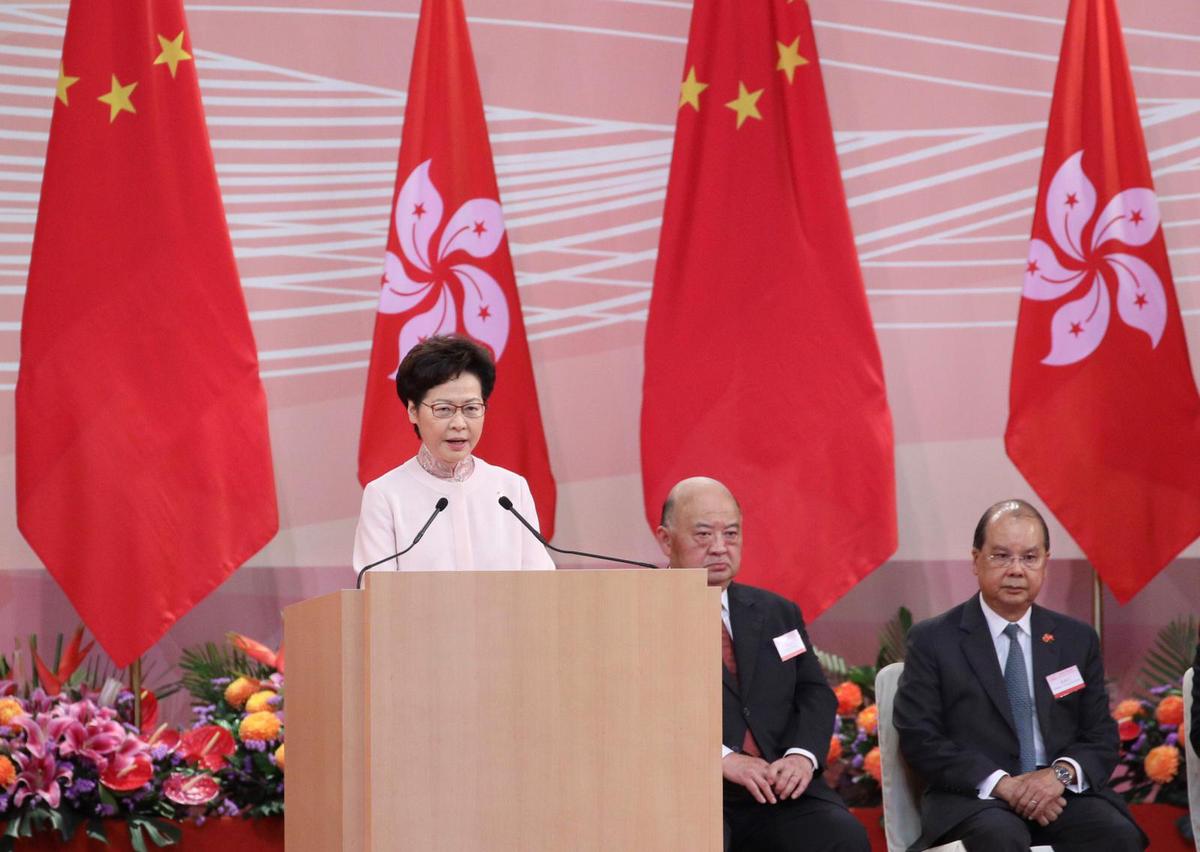 While it is important for us to respect and protect the national anthem, safeguarding national security is of even greater importance as this concerns the unity, territorial integrity and development interests of our country and is closely related to the livelihood of our people. Yesterday, the Standing Committee of the National People's Congress passed the Law on Safeguarding National Security in the Hong Kong Special Administrative Region of the People's Republic of China (the National Security Law in Hong Kong). The national law was added to Annex III to the Basic Law and started to be applied in Hong Kong by way of promulgation by the HKSAR Government on the same day.

The enactment of the national law is regarded as the most significant development in the relationship between the Central Authorities and the HKSAR since Hong Kong's return to the Motherland. It is a historical step to improve the system for Hong Kong to safeguard our country's sovereignty, territorial integrity and security. It is also an essential and timely decision for restoring stability in Hong Kong. The significance of this decision is multifaceted. It shows that the Central Government is determined to restore stability in Hong Kong, after a year of escalating violence and riots since last June. It shows that the Central Government is determined to protect the vast majority of law-abiding citizens in Hong Kong from the minority who attempted to undermine national security. It also shows that the Central Government is determined to preserve and better "One Country, Two Systems", a principle underlying Hong Kong's stability and prosperity since the HKSAR was established 23 years ago.

Over the past month or so, in the face of all sorts of smearing and malicious attacks by foreign and local bodies and individuals against the enactment of the National Security Law in Hong Kong at the state level, government officials and legal experts in the Mainland, my governing team and I, local business and political leaders as well as various sectors in the community have explained from various perspectives that it is constitutional, lawful, reasonable and rational for the Central Government to introduce the National Security Law in Hong Kong. The Law will neither undermine the high degree of autonomy, the judicial independence and the rule of law in Hong Kong, nor will it affect the legitimate rights and interests of Hong Kong people. It targets an extremely small minority of people who commit four types of crimes that seriously threaten national security as provided in the Law, namely secession, subversion of state power, organisation and carrying out of terrorist activities, and collusion with foreign or external forces to endanger national security. It serves to protect the life and property, basic rights and freedoms of the overwhelming majority of our citizens. I would like to take this opportunity to extend my sincere gratitude to all those who have spoken openly for the National Security Law in Hong Kong and the some three million people who have signed in support of the Law online and on the street.

The implementation of the National Anthem Ordinance and the National Security Law in Hong Kong signifies the fulfilment of the constitutional responsibility of the HKSAR to better the institution of "One Country, Two Systems" and to bring the relationship between "One Country" and "Two Systems" back on the right track. However, to ensure that members of the public respect the national anthem of their own volition and safeguard national security wholeheartedly, public promotion and school education are of utmost importance. The relevant departments of the HKSAR Government will collaborate with different sectors of society and provide them with the necessary resources in order to carry out the related work properly.

As I said at my Inaugural Ceremony three years ago, "hope propels a society forward, and confidence is the foundation of hope." The past year has been the toughest challenge in my forty years of public service. Not only have I faced unprecedented personal attacks, but I was also worried about the future of Hong Kong. I am extremely grateful to the Central Government for its trust in me, to my family and close friends for their unreserved love and to colleagues at all levels for their staunch support. Their care and concern has given me strength amidst difficult times and faith that better days will prevail. Similarly, after one whole year of social and political unrest, we should be confident that Hong Kong will emerge stronger after stability is restored.

In the coming two years, leading the HKSAR Government out of the current political predicament, overcoming the post-epidemic challenges, reviving the economy, restoring Hong Kong's international reputation, rebuilding the relationship between the Government and our young people, and re-establishing social order are no easy tasks. However, as long as we all make Hong Kong our home, and are willing to put aside our differences and move on, I believe that there are always more solutions than problems and that Hong Kong can definitely build a better future.

May all of you have a happy festive day!