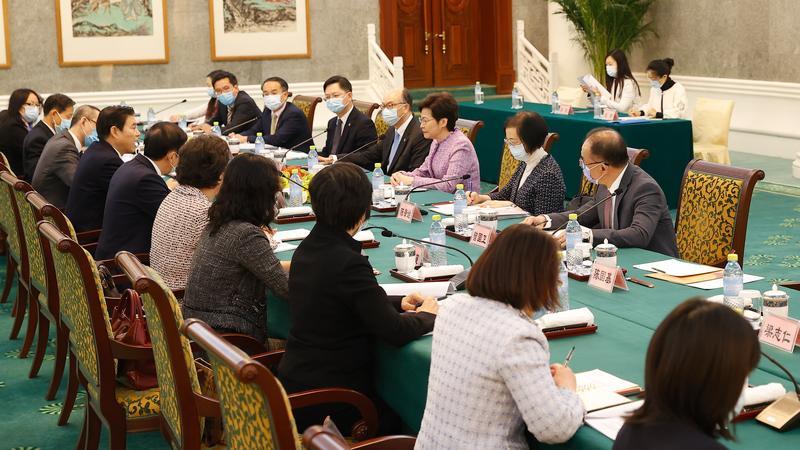 Hong Kong Chief Executive Carrie Lam Cheng Yuet-ngor on Wednesday canvassed support for the city's enterprises, cornered by the pandemic and US trade pressure, to further tap into the Chinese mainland market amid the nation's new "dual circulation" economic pattern.

On a grueling opening day of her three-day visit to Beijing, Lam, flanked by five bureau heads, met with officials of three ministries to garner support for Hong Kong's economic revival, which will be highlighted in her upcoming Policy Address at the end of November.

Hong Kong's political pundits and business leaders expect Lam's visit to bear fruit, allowing the city to further integrate into the nation's development on all fronts.

She took note of the record 240 Hong Kong exhibitors registered for the 2020 China International Import Expo, which starts on Thursday in Shanghai. That number is up 20 percent from last year. Merchants worldwide are among those pinning their hopes on the mainland's swift economic rebound from the pandemic to lift the global economic gloom.

Lam also sought help from the Ministry of Science and Technology in unleashing Hong Kong's potential in innovation and technology by partnering up with its tech giant neighbor Shenzhen.

While meeting Minister of Science and Technology Wang Zhigang in the afternoon, Lam expressed hope that the ministry will help in the city's COVID-19 vaccine procurement.

Lam put in a good word for Hong Kong's beleaguered aviation industry during her meeting with Director of the Civil Aviation Administration of China Feng Zhenglin, seeking aid to bolster the city's status as an international aviation hub and its role in building a world-class airport cluster in the Guangdong-Hong Kong-Macao Greater Bay Area.

Lau said he expects the central government to play a bigger role in leading the city to a speedy economic recovery and further development, as signaled in the proposals for the 14th Five-Year Plan (2021-25) for National Economic and Social Development and the Long-Range Objectives Through the Year 2035, which were unveiled on Tuesday.

The proposals have emphasized Hong Kong's integration into the national development, particularly through the Bay Area and the Belt and Road Initiative.

Noting that integrating into the nation's development should be a priority for the city, Lam Lung-on, Hong Kong deputy to the National People's Congress, said the Bay Area, one of the nation's key initiatives, creates room for the trade hub to leverage its advantages.

The businessman said the Bay Area also provides more opportunities for Hong Kong to make great strides in innovation and technology, as the mainland cities in the Bay Area such as Shenzhen have the capability to commercialize science and technology.

After the three-day trip in Beijing, Lam will head to Guangzhou on Friday and meet officials of Guangdong province and Shenzhen separately on Saturday.