BEIJING, April 14 (Xinhua) -- Speaking highly of the just-concluded eighth China-CEEC leaders' meeting, Central and Eastern European Countries (CEECs) express the hope that cooperation between the two sides can be lifted to a broader and higher level. 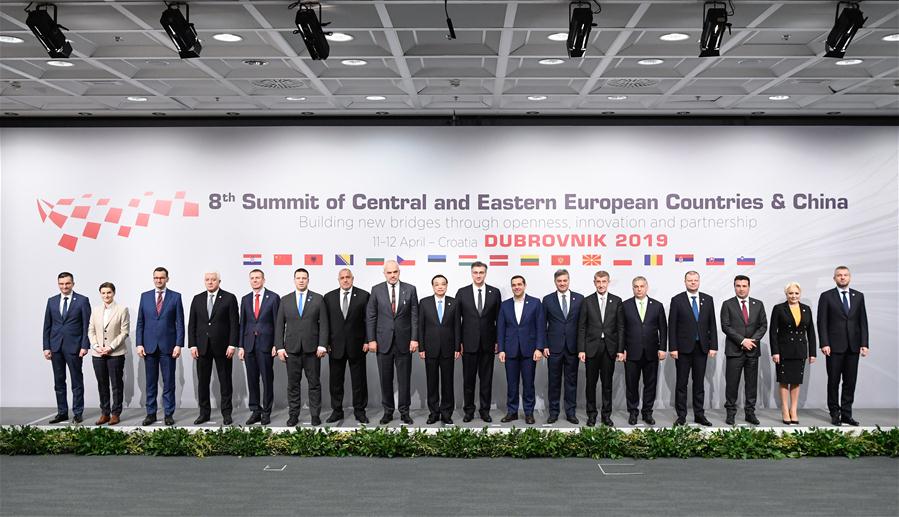 The meeting, themed "Building new bridges through openness, innovation and partnership," was held Friday in the southern Croatian coastal city of Dubrovnik, with the participation of Chinese Premier Li Keqiang and leaders of 16 CEECs.

Delo, a national daily in Slovenia, has paid close attention to the meeting. It said Friday in an editorial that the China-proposed Belt and Road Initiative (BRI) aims to join hands with regions including Europe in creating a better life and shows Europe the prospects of future win-win cooperation with Asia.

Tomislav Tolusic, Croatian deputy prime minister and minister of agriculture, told Xinhua that as Croatia hosts the meeting, it is a great opportunity for the country to position itself in the region, in Europe and even broader than that.

He said that Croatia and China have many common points and can cooperate in many different areas. He expects that bilateral cooperation will be more concrete after the meeting.

Tolusic's remarks were echoed by Luka Burilovic, president of the Croatian Chamber of Commerce, who said possibilities of cooperation between Croatia and China are enormous.

Li delivered a speech at the ninth China-CEEC Business Forum on Friday, during which he said China will continue to create conditions to import more honey, fruit, dairy and meat products and other farm produce from CEECs to meet the diverse needs of Chinese consumers.

Burilovic told Xinhua that his country was delighted by Li's remarks, saying this is good news for Croatia as his country could provide high-quality products for the Chinese market.

Ivona Ladjevac, senior researcher at the Institute of International Politics and Economics in the Serbia's capital Belgrade, said the China-CEEC cooperation has been continuously expanding its scope in recent years, and has reaped solid achievements, adding that this cooperation mechanism has won higher expectations.

It can be expected that the China-CEEC cooperation will be further strengthened by such measures as expanding investment in infrastructure to promote financial flows and trade exchanges, Ladjevac said.

As there is a growing enthusiasm for learning Chinese language and culture among European students, educational exchanges can do a lot to promote the China-CEEC cooperation, she said.

Endre Spaller, vice president of Hungarian Governmental Information Technology Development Agency, told Xinhua that cooperation with China is the key to the county's development as China is a growth engine for the world market.

He appreciated the importance China attaches to Central and Eastern Europe, and believes that the cooperation between Hungary and China faces greater opportunities in the future.

President of Sino-Czech Aviation Association Petr Hyl said that the CEECs welcome the cooperation mechanism with China as they have more space to highlight their priorities.

Finding a right partner is always the foundation of successful cooperation, and Czech companies welcome the possibility of meeting new potential partners from China, Hyl added.

Faruk Boric, executive director of the Center for Promotion and Development of the Belt and Road Initiative, said since China proposed the BRI, European countries that participated in its construction have benefited a lot.

Within the China-CEEC cooperation framework, relevant countries would gather together annually to negotiate and implement new projects in areas of interest to all the participants, with none of such cooperation failing to notch up win-win results, Boric added.

Marceli Burdelski, vice president of the Asia Pacific Society in Poland believes that China-CEEC cooperation do not conflict with China-EU cooperation. He said the CEECs cooperate with China to seek economic development and narrow down gaps with western European countries, which is good for the integral development of Europe.

He also said that this year marks the 70th anniversary of the establishment of diplomatic relations between Poland and China. Taking this opportunity, Poland and China can open up wider areas of cooperation, and bilateral economic and trade cooperation will reach a higher level.

Sylwester Szafarz, the former consul general of Poland in Shanghai, China and expert on international issues, spoke highly of the China-CEEC cooperation, considering it as one of the initiatives and mechanisms that China proposed while actively participating in global governance and maintenance of multilateralism.