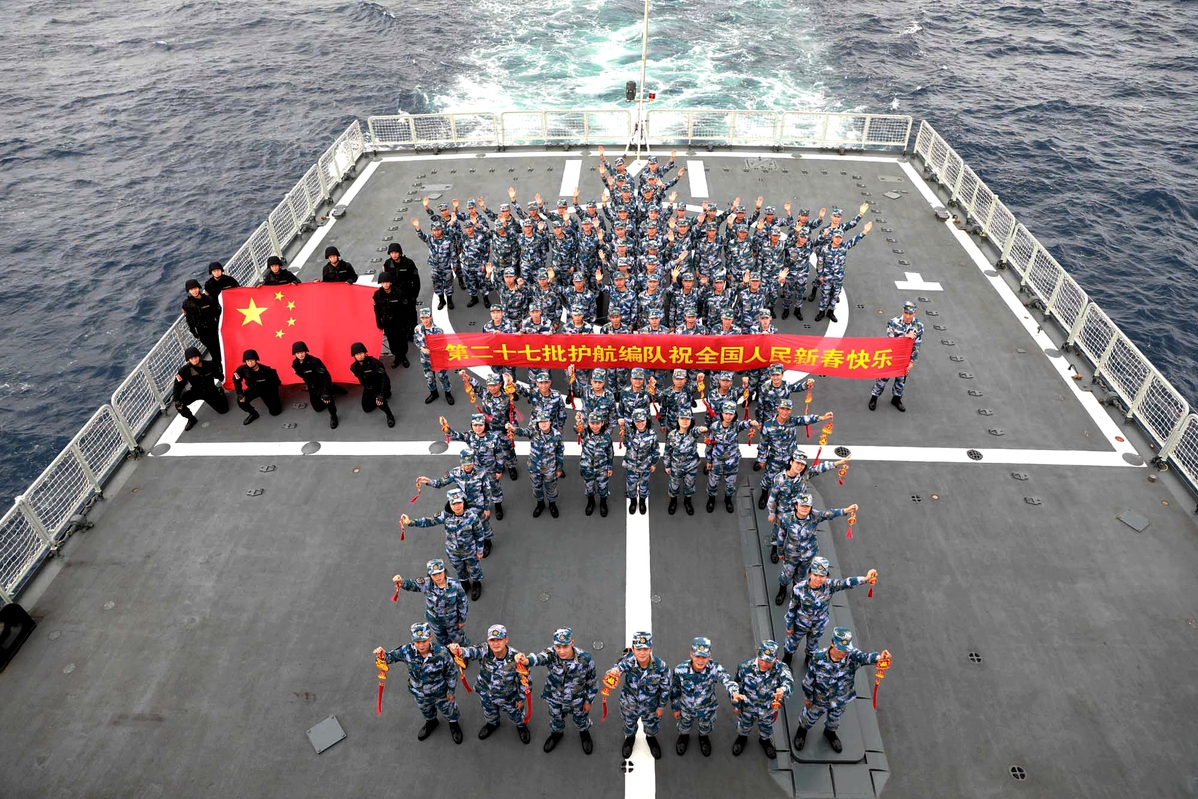 Chinese all around the world, from Beijing to New York, are donning red jackets, hanging red lanterns, and filling red envelopes with money in celebration of the Chinese New Year, one of the world's biggest festivals.

The Chinese New Year will begin on Tuesday, marking the start of the Year of the Pig.

The brave men and women crewing the Chinese naval escort fleet curtailing piracy and escorting civilian ships in the Gulf of Aden and the waters off Somalia, embrace festivities for the New Year in their own way－far away from home.

The People's Liberation Army Navy celebrated the 10th anniversary of escort missions in the region in December. Over the last decade, China has dispatched 31 escort task forces, which included more than 100 ships and 26,000 personnel, and has helped escort around 6,600 vessels－half of which were foreign owned.

The PLA Navy has also carried out other missions, including the evacuation of Chinese nationals from Libyan war zones in 2011 and Yemen in 2015, the search for the missing Malaysia Airlines Flight 370, and sending potable water to the Maldives during a water crisis in late 2014.

These heavy mission loads mean Chinese naval personnel often spend Spring Festival on deck at sea. Unlike the cheerful palette of red shades saturating the land for Chinese New Year, blue is the most dominant color during their festival－from the sky, sea, and on their camouflaged uniforms.

A blue Spring Festival can bring out the blues. "Far at sea, stars above our heads, no busy streets, no noisy crowd, no company from family or spouse," said Li Jingbo, an ammunition officer onboard the guided missile destroyer CNS Haikou, one of three naval vessels in the 27th escort task force. 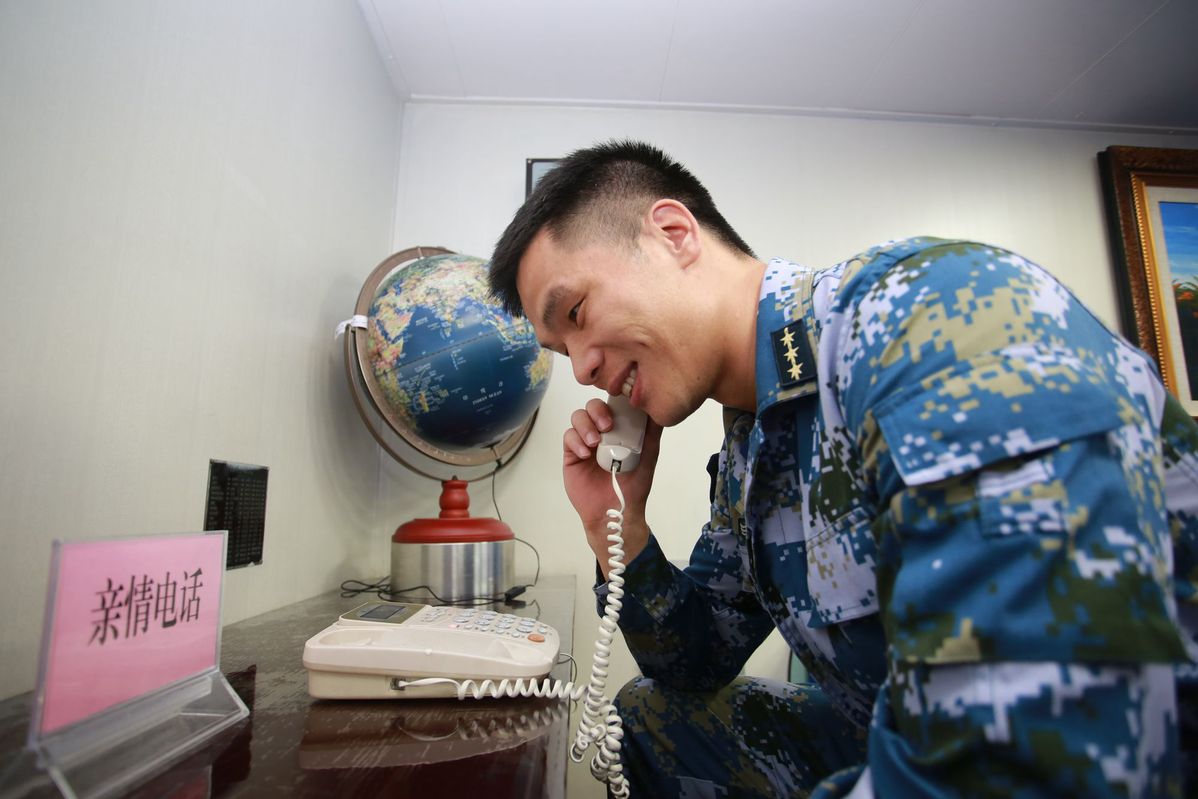 A soldier makes a greeting call to his family on a Chinese naval escort fleet in February last year. (Photo: China Daily)

Li Changhuan, one of Li's crewmen, said the short poem paints the big picture of what Chinese New Year is like for the naval task force. "Reuniting with family and celebrating the new year together is a common aspiration," he said.

Although the conditions might be depressing, everyone was still cheerful, festive, and "feeling joy" as they decorated the interior with paper cutouts, balloons and lanterns.

"People might take family reunions during Spring Festival for granted, but for us, it is a real luxury," Li Changhuan said, adding that one of the most frequently heard sentences among his crewmates was them telling their families "sorry, I can't come home".

"Our jobs don't get easier during the holiday, and we must carry the burden of protecting regional and national security," he said. "We are all well aware of the responsibility on our shoulders, and this sense of duty is what drives us to give our best, even when everyone back home is enjoying their time off."

On the Haikou's operation deck, Wang Guoli said that he and Lin Huyuan have to stare at dots on their radar screen during Spring Festival to look for any suspicious activity. "When there are big merchant ships passing by, we have to focus even harder," he added.

On side platforms of the deck, Wang Lei from the Special Combat Unit and his teammate used high-power binoculars to survey the water surface, while standing and perspiring under the baking sun in full combat gear. 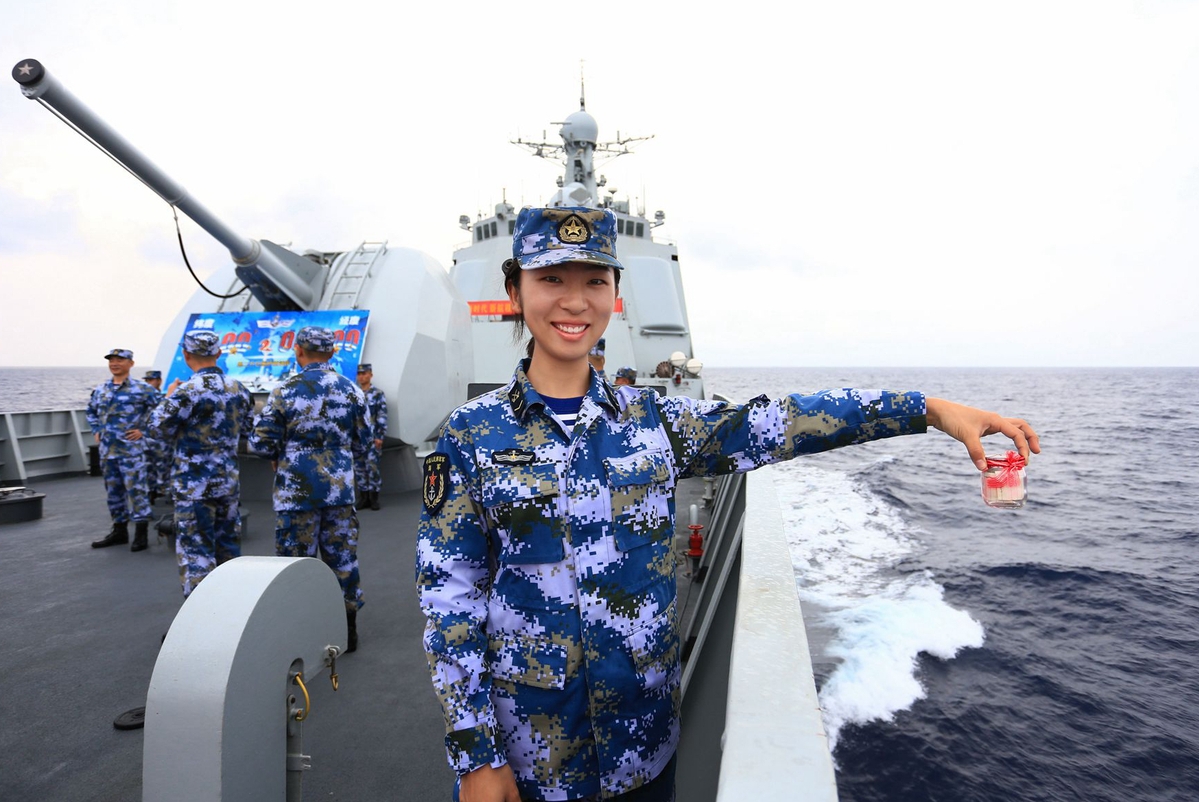 Zhou Liang, vice-captain of the ship, said that there are no holidays during escort missions, and everyone must be on high alert and be ready to respond to anything. "We are like hunters, we sleep with one eye open," he said.

Xie Lingyun, a PLA naval crewman on Haikou, said he had only returned home three times for Spring Festival during his 14 years of service. Sometimes, he would play a song called Mother in his bunk, and his bunkmates often asked him to stop playing it because it made them homesick.

"The eve of Chinese New Year is for reunion, and it is special for us even though we are so far from home," Xie said, adding that the naval crew would make dumplings, add new dinner items like shrimp and lamb chops, and have fun with "comrades from around the country like a big family".

Due to time differences, the naval crew might not be able to catch the New Year's Gala on television, so Xie said that "we held our own little gala on our ship's deck, and we danced, sang songs, and rehearsed talent shows on our own".

"There is no sound of firecrackers on the ocean, but we are cracking up the silent night with our laughter," he said. "It is a great honor to serve with the escort task force, and the memories and experiences shall be forever cherished."