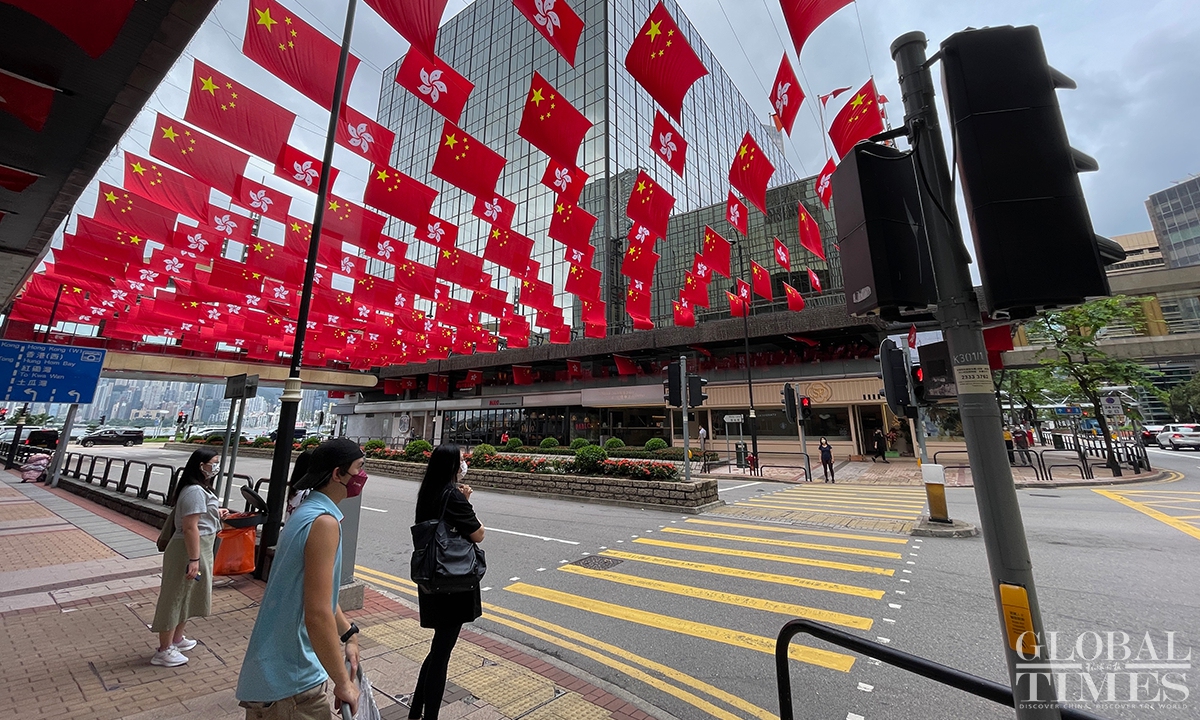 As the 25th anniversary of Hong Kong's return to the motherland approaches, various celebration events are being launched in the special administrative region.

A fleet of 25 large fishing boats organized by the Hong Kong Fishermen Consortium sailed through Victoria Harbour on Tuesday morning as a part of the celebration events for the 25th anniversary of Hong Kong's return and the inaugural ceremony of the sixth-term government of the Hong Kong Special Administrative Region (HKSAR).

All the boats hang China's national flag and HKSAR flags, with some also hanging banners with slogans such as "sharing opportunities and creating a better future."

The consortium said the boat parade symbolizes the "one country, two systems" principle continuing under the leadership of the central government.

On Tuesday morning, the Hong Kong Celebrations Association announced the launch of a series of celebration activities for the anniversary on July 1. The association will organize a variety of events this year including setting up installations related to Hong Kong culture. An open-top bus together with taxies will cruise through the city as a celebration.

As the anniversary is approaching, Hong Kong is well prepared with a celebratory atmosphere. China's national flags, HKSAR flags and celebration posters can be seen everywhere in the streets, shopping centers and communities.

The Leisure and Cultural Services Department under the Home Affairs Bureau of the HKSAR has scheduled celebration events including exhibitions and carnivals with a budget of about HK$300 million. On July 1, residents will have free access to most recreational facilities, public swimming pools and water activity centers.

On July 1, during the inaugural ceremony, John Lee Ka-chiu will assume office as the sixth-term chief executive of the HKSAR and lead the new administration of Hong Kong.

According to Tam Yiu-chung, a member of the National People's Congress Standing Committee from Hong Kong, celebration activities will be held on Friday morning and a performance will be held at Hong Kong Coliseum on Friday evening. In terms of epidemic prevention and control, Tam noted that the SAR government has worked out plans and given it sufficient consideration, Hong Kong media RTHK reported.

As a city with close relations with Hong Kong, Shenzhen is also holding themed activities. A carnival event held in Hong Kong was broadcast live in Qianhai, Shenzhen on June 15. Shenzhen Concert Hall has also rolled out a Hong Kong-themed performance season throughout June and July.

According to the official website of the HKSAR government, "Police are getting prepared for President Xi's possible visit to Hong Kong. Police will take appropriate measures to ensure the entire security operation be conducted in a safe and orderly manner," a HKSAR Police spokesman said Tuesday.

"These measures may lead to road closures, and temporary traffic and pedestrian diversions. We appeal to the public for their understanding and support and follow the instructions of the police officers at scene. Police Community Relations Officers will also provide advice to the local and neighbourhood groups on the impacts of the special arrangements," the spokesman added.

The spokesman also noted that the traffic conditions of Admiralty and Wan Chai North might be affected. "Motorists are urged to avoid driving to the areas. If they need to go to the areas, they are advised to plan early, be patient and follow the instructions of the police officers at scene."

All the guests at the 25th anniversary ceremony will enter the closed-loop management and take nucleic acid tests for COVID-19. The incumbent and incoming officials will be quarantined in advance at designated hotels and other invited guests have been in closed-loop management since last Thursday, RTHK reported.

Some members of the Legislative Council (LegCo) of the HKSAR have already received electronic invitations to the activities including the flag-raising ceremony at the Golden Bauhinia Square at 8 am and the inauguration of the new Hong Kong administration at Hong Kong Convention and Exhibition Centre at 10 am on Friday.

The incumbent Hong Kong Chief Executive Carrie Lam and several other officials checked in to the designated hotel in advance on Monday, local media reported.

Hong Kong's incumbent Secretary for Food and Health Sophia Chan Siu-chee urged residents to take preventive measures since the flow of personnel is increasing amid the celebration activities.

Hong Kong police announced on Tuesday afternoon that during the ceremony period, security zones will be set up with some vehicle passage and pedestrian overpasses temporarily closed, local Hong Kong media reported.

To ensure safety at the upcoming celebrations in Hong Kong, the neighboring city Shenzhen has banned drones and other small aircraft in the city for six days starting on Tuesday, the local public security bureau said Monday.