Census tally gets underway in Beijing

As many as 115,000 workers in Beijing will visit homes to conduct the seventh national population census, which kicked off on Sunday, authorities in the capital said on Monday.

The work will last until Dec 10. 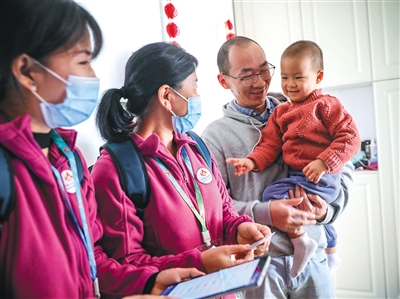 All the workers wear the same uniforms and use the pad to complete the electronic transaction. (Photo: Xinhua)

All the workers for the census have been given training, including communication skills and emergency responses.

Nationwide, about 7 million workers will visit homes for the census effort.

Carrying out the census is critical to understanding the nation's population size, structure and distribution, said Ning Jizhe, deputy head of the National Development and Reform Commission, during a videoconference promoting the effort.

The census will provide important information for the national strategy of responding to the challenge of population aging, as well as for promoting high-quality development, Ning said.