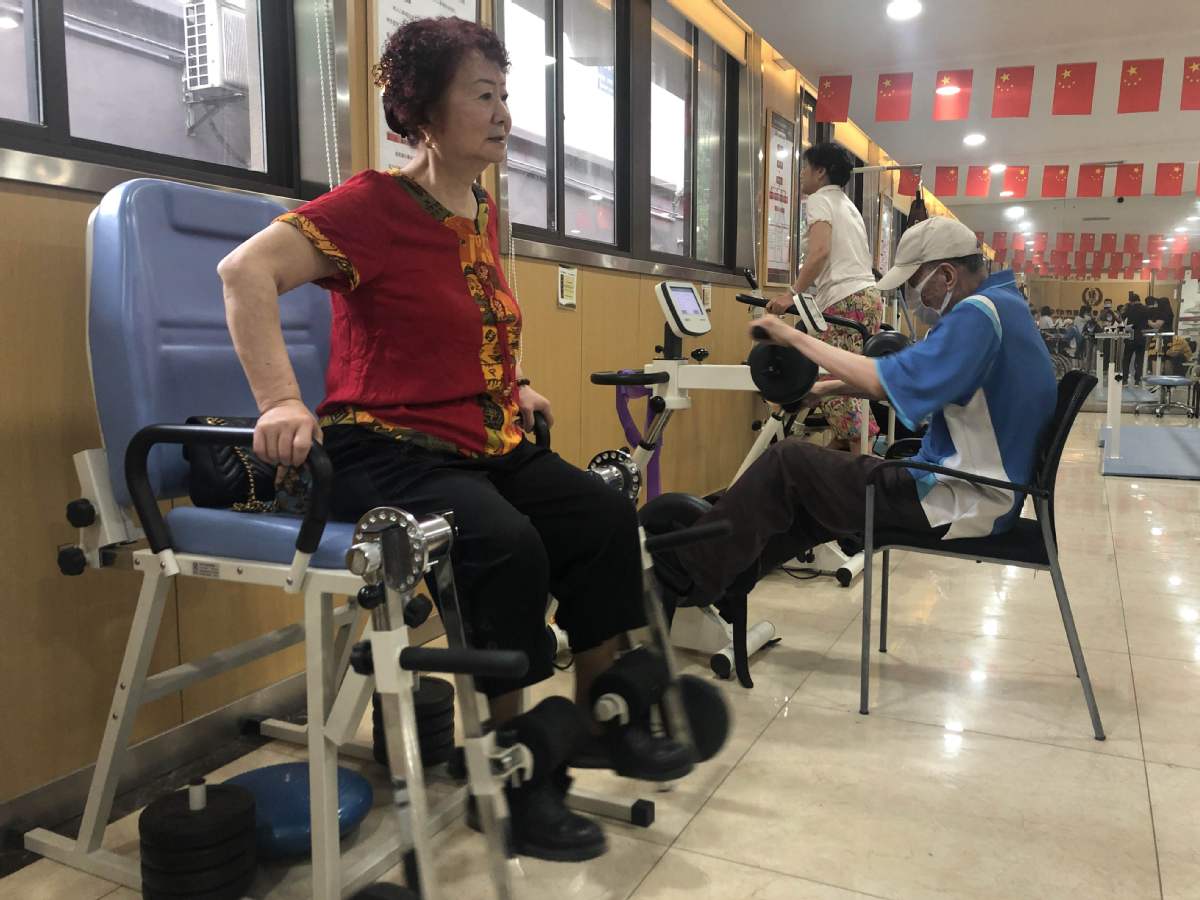 Every morning, 83-year-old Wu Jumei arrives at the Hongqiao Comprehensive Elderly Care Service Center in Shanghai to spend the day with other seniors.

"I feel lonely when staying at home after my son goes to work," said Wu, whose husband died three years ago. "But now I know some friends here, and chatting with them makes me feel better."

Wu usually takes part in handicraft activities organized by social workers on the second floor of the center, and eats lunch in the canteen on its first floor. She arrives at the center around 9 am and leaves at around 4 pm, with her journey to or from home taking just 10 minutes.

Located in a residential neighborhood in the city's Changning district, the center integrates all the services needed by seniors. In addition to dining and activities, it provides nursing and basic medical services, a rehabilitation facility, mental health counseling, equipment rental for the disabled, and digital literacy training.

As China becomes an aging society, demand for centers offering such services is increasing. The results of the latest national census, released this month, showed that people aged 60 or above account for 18.7 percent of the country's population, up about 5.4 percentage points from a decade ago.

To ensure older people have access to care and protection, the government has long been exploring a community support and service system for in-home elderly care.

In 2012, national legislators revised the Law on Protection of the Rights and Interests of the Elderly to add a pledge that the State would establish and perfect a social support services system for the elderly that is based in the home and bolstered by the community, with professional organizations providing support.

The Hongqiao elderly care center has been serving 100,000 seniors from seven neighboring communities every year since its completion in 2018, and similar centers have opened in other cities across the country in recent years.

Built in the early 1980s, Hemu New Village is a residential community in Hangzhou, Zhejiang province, that is home to more than 5,000 people, more than a third of whom are older than 60.

Caring for the elderly residents has become a big issue for their families, and the local government launched a community elderly care program in the neighborhood three years ago.

The program has seen a canteen, an elderly care center, a rehabilitation center and small gardens built or renovated in the neighborhood. They are operated by qualified companies, said Zhou Cheng, the community's Party chief.

"The environment in the community is now much better than before," said 86-year-old resident Wang Zhangrong, who has been living in Hemu since his retirement. "It's green and spacious, and I love spending time with fellow elders here. There is no need to go to other elderly care facilities outside."

The community has also started to install elevators in old buildings and is developing a smart elderly care system that will allow social workers to check on residents if their gas or water usage is out of the ordinary.

"Providing elderly care services in the community guarantees access to care," Zhou said. "I think that's a key right for them."

According to the Ministry of Civil Affairs, the central government allocated 5 billion yuan ($777 million) from 2016 to 2020 for community-based elderly care programs. The number of elderly care centers nationwide reached 180,000 by August, providing 3.42 million beds for seniors near their homes.

In rural areas, caring for the elderly has become an increasingly urgent task, in part due to labor migration. A large number of young people have left villages to work in cities, leaving seniors behind.

Chen Zilu, 84, lives alone in Houchen village in Wuyi, Zhejiang province. In poor health, he struggled to cook his own food before the village opened a canteen nine years ago.

"Now, when I don't feel like cooking, I just come for lunch and dinner," Chen said while eating a bowl of noodles at the canteen this month.

Chen Zhongwu, the village's deputy Party chief, said seniors account more than a quarter of its 1,071 residents, and nutritious food was their biggest demand, especially for those who live alone like Chen Zilu.

"The canteen provides two free meals for those aged above 70," Chen Zhongwu said. "And this method has helped improve their health, because otherwise many of them would just cook once a day at lunchtime and eat the leftovers for dinner."

Those who need special care for the whole day can receive it at an elderly center in a township an hour's drive away.

In March, the building of a three-level elderly care system covering villages, townships and counties in rural areas was included in a policy statement jointly released by the Communist Party of China Central Committee and the State Council.

Yu Shaoxiang, an associate legal researcher at the Chinese Academy of Social Sciences, said such planning shows the central government has made elderly care in rural areas a priority.

Chang Jian, director of the Human Rights Study Center at Nankai University, said providing special care to the elderly is an important aspect of protecting their fundamental human rights.

"As the country's becoming an aging society, different places should explore suitable elderly care methods in accordance with their circumstances," he said. "But we need to make sure that the care covers everyone, and that the cost is economically sustainable."