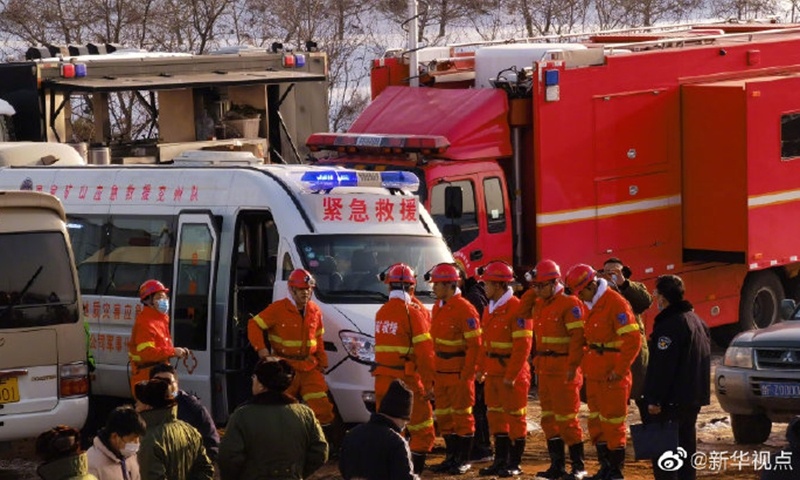 The explosion took place in Qixia, Yantai on Sunday afternoon, but was not reported to the local authorities until Monday night, a local official in charge of the rescue said at a news conference on Tuesday.

The explosion occurred 240 meters below the wellhead, resulting in damage to the shaft ladder room, malfunction of the cage and the communication system. A number of the 22 goldmine workers who were working in the deeper part in the mine were trapped.

As of Tuesday, more than 320 rescuers had joined the rescue on site. More than 40 sets of various types of machinery and equipment have been set, with forced ventilation methods being used to convey air down the shaft and remove harmful gas and fumes. Firefighters have transported a sound detection system 370 meters down the shaft.

At present, due to the explosion in the shaft near the middle, the toxic gas cannot be completely removed in a short period of time, and the shaft equipment is damaged in many places, so the cage and rescue personnel have not yet reached the operating surface where the miners are trapped.

China’s law clearly regulates that the person in charge of the accident unit shall report accident information to the local government department within one hour after receiving the on-site report. China also has severe penalties for late reporting and concealment of accidents.

The mine was owned by Shandong Wucailong Investment Co. After the accident, the company organized forces to conduct a rescue immediately without being fully aware of the difficulties of rescue.

The accident was reported to the city’s Emergency Management Bureau 30 hours later, by which time the company had not made any successful rescue.

“The company’s disregard for life is the enemy of the people,” wrote the Xinhua News Agency, commenting on the incident, “which the state law will not allow.”

Within one hour after receiving the accident report, the main leaders of Yantai Municipal Party Committee and municipal government rushed to the scene, and have since mobilized multiple forces, carried out a rescue and released relevant information in time, the People’s Daily reported.

Provincial leaders received a related report one hour later and called for the rescue immediately. Seven work groups were set up to deal with relevant aspects including accident investigation, reception of miners’ families, and epidemic prevention.

Secretary and deputy secretary of the Communist Party of China (CPC) Shandong Provincial Committee and governor of Shandong Province returned to the site for rescue on Tuesday morning after taking leave from a meeting in Beijing.

Liu Jiayi, secretary of the CPC Shandong Provincial Committee, used underground communication equipment to call out to the trapped workers, but heard no reply.