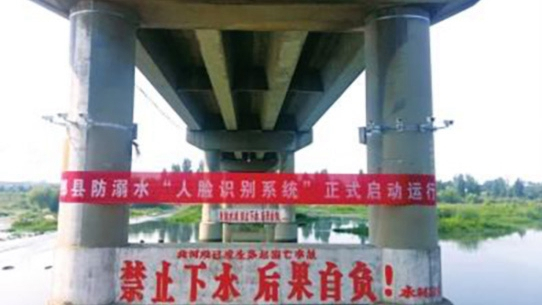 The warning system equipped with eight cameras and an alarm horn near a reservoir in the city’s Jiaxian County aims to warn youngsters not to get too close to the water.

When an 8-year-old boy approaches the pier, he will hear a loud warning mentioning his name: "You have entered dangerous waters; many have drowned here, please leave at once. Information has been sent to the phones of your parents and teachers."

Actually, when any visitor approaches within about 200 meters of the water, the HD spherical camera will capture their facial information and match the system's database to verify their identities.

The database now covers more than 110,000 students in 81 primary and middle schools. It is expected to be expanded citywide next year to cover 120 areas vulnerable of drowning.

Jointly designed by the Pingdingshan Municipal Education Bureau and Ping An Technology, the system reportedly has an accuracy rate above 97 percent and is expected to effectively reduce drowning accidents in cooperation with human patrols.

Earlier this summer, a 10-year-old boy fell into the city's Ruhe River when trying to retrieve his shoes. His grandfather jumped into the water to save him, but both were drowned.

Last month in east China's Shandong Province, twin 8-year-old girls were found dead in the sea near an unsupervised beach even though their mother accompanied them. The deaths put child drownings in a nationwide spotlight.

Drowning is the leading cause of injury death for children between 1 and 14 years old in China, according to the World Health Organization.

"It seems that there is at least one new daily drowning reported in the news every summer in China. I wish new tech like Pingdingshan's facial recognition could be spread to more areas," a user commented on social media platform Weibo.