A plaque bearing name of the new office was jointly unveiled at an opening ceremony by Tung Chee-hwa and Leung Chun-ying, both vice chairmen of the National Committee of the Chinese People's Political Consultative Conference, Carrie Lam, chief executive of the HKSAR, Luo Huining, deputy director of the Hong Kong and Macao Affairs Office of the State Council, and Zheng Yanxiong, director of the newly established national security office.

Addressing the ceremony, Lam said the inauguration of the office "marked a historic moment and another milestone in establishing and improving the legal system and enforcement mechanisms for safeguarding national security in the HKSAR."

The central government has full trust in the HKSAR and authorizes it to fulfill the main task of safeguarding national security, but still needs to retain the power to address an extremely small number of cases which the HKSAR is unable to deal with, Lam said.

She expected the office to be a significant partner of the HKSAR government in safeguarding national security.

In his speech, Luo, who is also director of the Liaison Office of the Central People's Government in the HKSAR, said the national security office is "the envoy of Hong Kong's security" and "the gatekeeper of national security."

The national security office in Hong Kong will perform its mandate in strict compliance with the law and be subject to supervision in accordance with the law, and will not infringe upon the lawful rights and interests of any individual or organization, he said.

The office was established in accordance with the Law of the People's Republic of China on Safeguarding National Security in the HKSAR, which was adopted by China's top legislature and promulgated in the HKSAR on June 30. 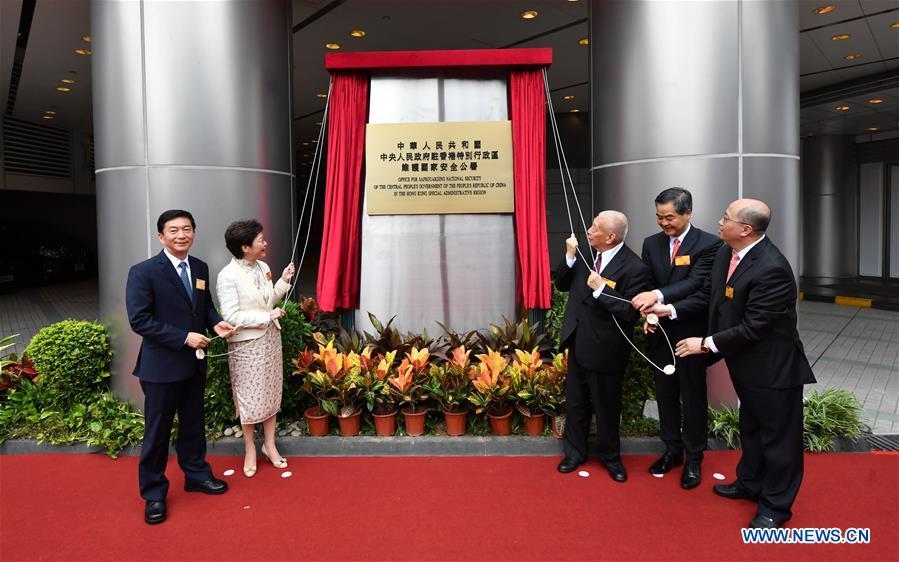 Safeguarding national security is essentially within the purview of the central government, which has both the power and the responsibility to take all necessary measures to safeguard national security, he said.

The promulgation and implementation of the national security law is "the turning point for Hong Kong from turmoil to stability," Luo added.

Acts and activities endangering national security are bound to be effectively prevented, curbed and punished so that the practice of "one country, two systems" policy in Hong Kong will not be distorted and will continue to be brimming with dynamism, he said.

Zheng Yanxiong, director of the national security office in Hong Kong, said in his speech that the office will resolutely fulfill its mandate to safeguard national security and exercise relevant powers in accordance with the law.

Welcoming support from all sectors in Hong Kong for the office, Zheng called for joint efforts to safeguard national sovereignty, security and development interests, promote the steady and sustained implementation of "one country, two systems," and ensure the prosperity and stability of Hong Kong.