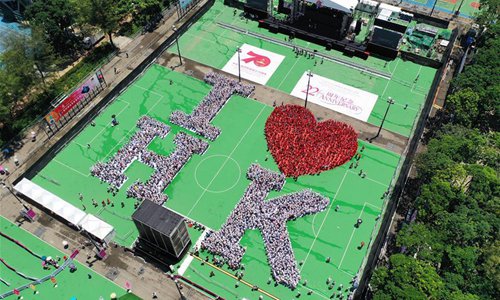 The liaison office for China's central government in Hong Kong on Thursday voiced its firm support for the city's chief executive Carrie Lam Cheng Yuet-ngor, the Hong Kong police and those Hongkongers who aired their demands through reasonable and peaceful means.

Wang Zhimin, director of the Liaison Office of the Central People's Government in the Hong Kong Special Administrative Region (HKSAR), delivered a speech to about 700 participants from 20 different groups of Hong Kong Thursday, saying that "the rule of law and stability are extremely important. Chief Executive Lam Cheng has never eluded difficulties and tough works in her governance. She has led her team to push a series of measures in innovation, sci-tech, land policy and education, which solved many deep problems that related to the interests of most residents.

The Hong Kong people would have a stronger sense of gain and happiness over the next few years after the policies were implemented, Wang noted.

On the struggle over the extradition law amendment bill, Wang noted that a few protests took place recently and most Hong Kong residents expressed their demands through peaceful and reasonable ways, which showed the inclusiveness and civilization of Hong Kong society.

However, Wang also pointed out that violent incidents by radical extremists, such as the storming of the Legislative Council, also occurred and shocked people inside and outside of China.

"A series of these incidents have harmed the normal order of the city and impacted the daily lives of the people, and trampled the rule of law in Hong Kong… They brought an existential threat to Hong Kong's prosperity, stability and social civilization," he said.