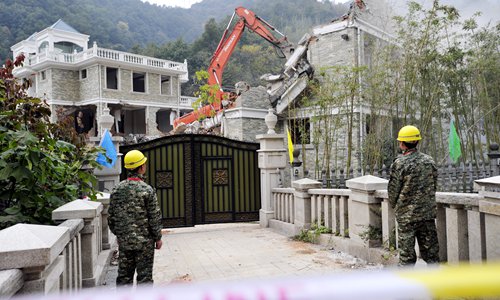 Zhang Chun'e (pseudonym) did not know her farmland would become the root of a corruption case when it was sold to a property developer 15 years ago.She lives in Jiangnan village, a 40-minute drive away from downtown Xi'an, Northwest China's Shaanxi Province, on the north side of the Qinling Mountain.The Qinling Mountain played an important role in the formation and evolution of China's physical geography. It is the North-South divide, as well as a major habitat of rare animals such as pandas, snub-nosed monkeys, and crested ibis.Zhang, 64, has been living in the village since she got married 40 years ago. The major source of income for her family was the crops grown in the terraced field right next to the village.However, 15 years ago, the field her family relied on for living was sold to a real estate developer. Each member of her family received a "subsidy" of 10,000 yuan ($1,450). The developer received  more than 66,000 square meters of farm land.A year later, a grand compound with fancy villas was built on the mountainside. This compound is not unique."Drive along the road under the mountain, you can see these compounds everywhere," a local official told the Global Times."But starting this summer, some villas have been demolished," Zhang told the Global Times.