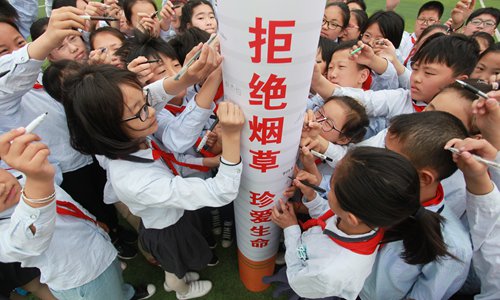 Students at a primary school in Yangzhou, East China's Jiangsu Province, sign their names on a banner at an anti-smoking event on May 30. (Photo: VCG)

A video showing Chinese teenage heartthrob Wang Yuan smoking in a restaurant in Beijing recently made a splash on social media, enraging some of his fans who said he had ruined his "good boy" image. A couple of hours after the footage was released on Sina Weibo on May 21, Beijing's health supervision authorities launched an inspection of the restaurant and requested rectification and also punished Wang in accordance with regulations on smoking control.The young idol immediately made an apology, saying he regretted his mistake and the negative social impact caused by his misbehavior as a public figure. He asked for forgiveness and promised to be a better adult in his apology.Meanwhile, a "Wang Yuan smoking" hashtag rapidly lit up Sina Weibo, which was viewed more than 1.5 billion times in the day, bringing back Beijing's strictest smoking ban back into the public spotlight. Chinese analysts viewed Wang's case as a timely warning for the country to pay more attention to the smoking ban, highlighting its influence on curbing smoking among teenagers. It also revealed the difficulties behind enforcing smoking control and raised widespread concerns over why it is so hard to implement the ban in some public places. Widespread banImplemented on June 1, 2015, Beijing's smoking ban stipulates that smoking is forbidden in all indoor public places, including restaurants, office buildings and public transportation. The ban also extends to open-air spaces near school buildings, women's and children's hospitals, sports venues and cultural relic protection sites. Smokers who violate the ban can be fined up to 200 yuan ($32). Owners of venues who fail to put up non-smoking signs or who allow smoking in their premises can be fined up to 10,000 yuan. In random interviews, the Global Times found that the smoking ban was well implemented in many office buildings, with smokers smoking outside the building. However, some said that despite smoking signs being put up around the office, some people still smoked in staircases. Visits to several Beijing restaurants showed that indoor smoking had made a comeback. Waiters told the Global Times that they knew about the regulations, but were often caught in a dilemma as they feared getting into arguments with customers.A Beijing resident surnamed Li, who has been a smoker for more than 10 years, told the Global Times that many restaurants posted no-smoking signs, but waiters would not warn smokers if there were few customers.  Separately, visits to several of Beijing's shopping malls found that smokers gathered at corridors with apparently no inhibition. The ban on smoking in public places now faces a new problem - e-cigarettes. The Beijing Tobacco Control Association said it has received an increasing number of complaints about people smoking e-cigarettes in public places. But the smoking ban covers only traditional tobacco products and law enforcement officers are powerless to act against those who use e-cigarettes.Successful campaignLooking back over four years of efforts, the smoking ban has seen great success. Zhang Jianshu, president of the Beijing Tobacco Control Association, told the Global Times that more than 27,000 questionnaires gave 83.6 points or more to Beijing in its efforts to control smoking. A statement sent by the Beijing Municipal Health Commission to the Global Times on Thursday showed that curbing smoking has become a consensus of society. The adult smoking rate in Beijing dropped from 23.4 percent in 2014 to 22.3 percent, with the number of smokers decreasing by 200,000. The rate of smoking in public places dropped from 34.4 percent to 4.9 percent and the rate of taxi drivers who allowed passengers to smoke in their cars dropped from 23.8 percent to 4.5 percent. Meanwhile, the rate of drivers smoking in cars dropped from 1 percent to 0.5 percent. Wang Benjin, an official from the health commission, said at Thursday's press conference that 20,991 venues have been required to make rectifications and nearly 10,000 people were  fined a total of 506,000 yuan for smoking in public venues. Another report published by the Chinese Center for Disease Control and Prevention on Thursday showed that in 2018, the rate of smokers aged 15 and above in China was 26.6 percent, showing a downward trend, but there was still a long way to go to achieving the goal of bringing that number down to 20 percent by 2030. The survey also showed that public awareness of the harm of smoking is rising, with 86 percent of respondents saying that smoking could lead to serious diseases such as lung cancer, heart disease and erectile dysfunction. However, willingness to quit among adult smokers in China is low. Experts said that at teenagers want to try smoking.  In June 2018, reported annual revenues of more than 1 trillion yuan by the China National Tobacco Corporation sparked a debate online over health versus profit.The state-owned giant amassed more than 1.1 trillion yuan in profits in 2016 - the total profit of China's four major banks and two major gasoline companies - according to an article on Sina Finance, citing data released by Fortune China. Although the figure could not be verified, the website of the China National Tobacco Corporation shows that Chinese tobacco generated 1.11 trillion yuan in taxes and profits in 2017. Tobacco stores can find ways to sell cigarettes to teenagers, and many challenges for smoking control still remain, analysts noted.