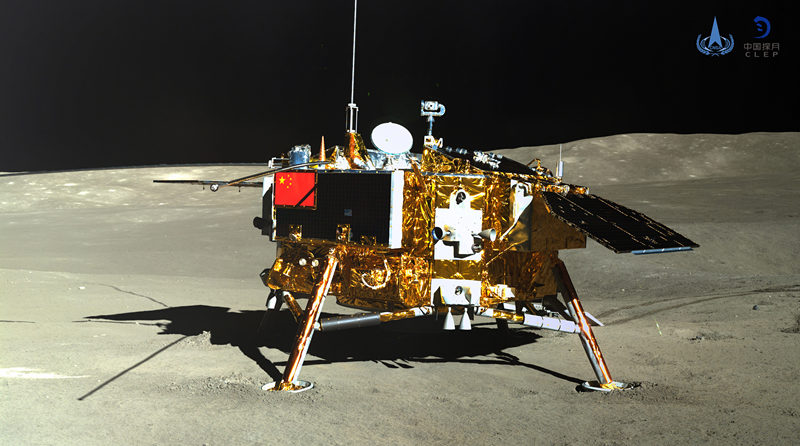 An image of the Chang'e-4 probe's lander taken by a camera installed on the moon rover Yutu-2. (Photo: China National Space Administration)

BEIJING, Jan. 11 (Xinhua) -- The Chang'e-4 mission, a further remarkable achievement in China's space program, marks an important stride toward China being a strong country in space exploration, hailed a congratulatory message sent by the Communist Party of China (CPC) Central Committee, the State Council and the Central Military Commission (CMC) on Friday.

The mission realized the first-ever soft-landing and exploration of the far side of the moon, the first-ever communication between Earth and the far side of the moon via a relay satellite, and carried out significant cooperation with multiple countries and international organizations, according to the message read by Vice Premier Liu He, also member of the Political Bureau of the CPC Central Committee.

Liu He and Zhang Youxia, member of the Political Bureau of the CPC Central Committee and vice chairman of the CMC, arrived at the Beijing Aerospace Control Center on Friday, watching the lander and rover taking photos of each other.

The message attributed the success of the mission to the loving care and strong leadership of the CPC Central Committee with Xi Jinping at the core.

Its success, another contribution to mankind's exploration of the mysteries of the universe, also marks the Chinese people scaling a new height in climbing the science and technology peak in the new era, it said.

Following Xi Jinping Thought on Socialism with Chinese Characteristics for a New Era and the spirit of the 19th CPC National Congress, the mission has implemented the spirit of "chasing dreams, exploring fearlessly, working together to surmount difficulties and cooperating for win-win results", it said.

The mission has carried out the innovation-driven development strategy and promoted the building of a community with a shared future for humanity through practical actions, which will further improve China's economic strength, scientific and technological power, cohesion, and international influence, it said.

With the complete success of the mission, the fourth phase of China's lunar exploration program and the deep space exploration program will be inaugurated. The tasks ahead will be more arduous with unprecedented challenges, according to the message.

It encouraged scientists and engineers in China's space sector to make more achievements and contributions.