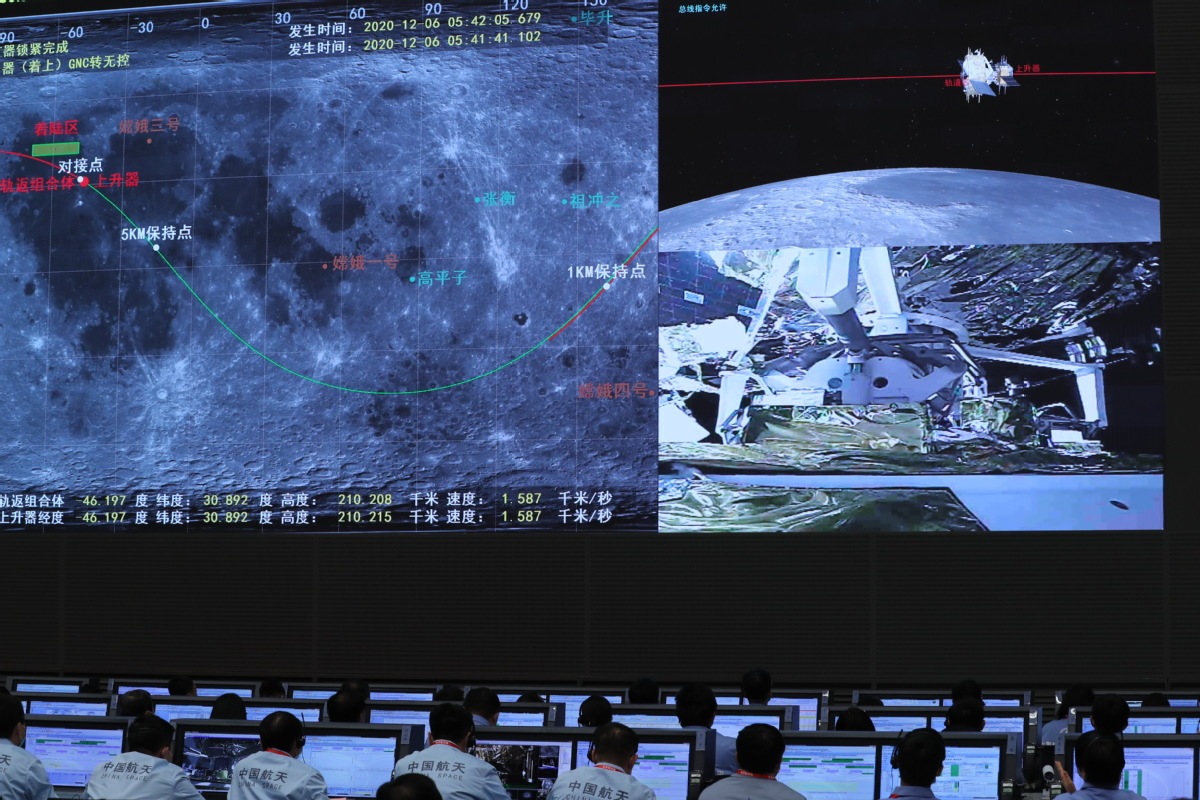 Technicians at the Beijing Aerospace Control Center monitor the docking of the Chang'e 5 lunar probe's ascender with its orbiter-reentry capsule combination on Sunday. (Photo: Xinhua)

Lunar samples collected by China's Chang'e 5 robotic probe will soon start their journey toward Earth, according to the China National Space Administration.

The rocks and dust from the moon have been delivered from Chang'e 5's ascender to their final host－the probe's reentry capsule, which will later bring them to Earth.

The 400-kilogram ascender docked with the 2.3-metric ton orbiter-reentry capsule combination early on Sunday morning and then transferred a sealed container holding 2 kilograms of lunar samples into the capsule.

The operation was the first automated rendezvous and docking of any spacecraft in lunar orbit.

The last time two components of a spacecraft docked with each other in lunar orbit was in December 1972 during the final Apollo mission, and that was monitored and controlled by astronauts.

One of the most crucial devices during the highly sophisticated docking maneuver on Sunday morning, a microwave radar, which is mounted on the orbiter, worked with its transponder on the ascender to measure the rapidly changing distance and provided communication between the two traveling vehicles to allow them to adjust their position during the docking.

Engineers at the 25th Institute of China Aerospace Science and Industry Corp Second Academy designed and built the devices. They applied multiple advanced technologies to the apparatus, making them the best of their kind in the world, said Sun Wu, the equipment's chief designer at the institute.

Several hours after the docking, the ascender departed from the orbiter-reentry capsule combination around noon, while the combination continued orbiting the moon before its journey back to Earth, the space administration said in a statement on Sunday afternoon.

After arriving in Earth orbit, the pair will separate in due course, and the reentry capsule will conduct a series of complicated maneuvers to return to a preset landing site in North China's Inner Mongolia autonomous region in mid-December.

Chang'e 5, China's largest and most sophisticated lunar probe, has four main components－an orbiter, lander, ascender and reentry capsule. The spacecraft was launched by a Long March 5 heavy-lift carrier rocket on Nov 24 at the Wenchang Space Launch Center in Hainan province, setting out on China's most challenging lunar adventure and the world's first mission since 1976 to bring lunar samples to Earth.

Late on Tuesday, the lander-ascender combination landed on the moon, becoming the world's third spacecraft to touch down on the lunar surface this century after its predecessors－Chang'e 3 and 4.Shortly after the landing, it began to use a drill to obtain samples from 2 meters beneath the lunar surface.

It finished the underground operation on Wednesday morning, and then started to use a mechanical arm to recover surface dirt.

All collection and packing processes were completed on Wednesday night, much sooner than expected. Samples were packed into a vacuum container inside the ascender.

The ascender activated an engine on Thursday night to lift itself into an elliptical lunar orbit to prepare for docking with the reentry capsule, marking the first time a Chinese spacecraft has blasted off from an extraterrestrial body.

If this mission is successful, it will make China the third nation to bring samples back from the moon, after the United States and the former Soviet Union.

A total of about 382 kilograms of lunar rocks and dust were recovered by the US Apollo mission astronauts and the Soviet Luna robotic landers from 1969 to 1976.