Change more than cosmetic in Shenzhen

The past 15 years have brought significant changes to Huaqiang North Street in Shenzhen, where electronics vendors have changed their long-standing business model as the nation has grown to become the world's major consumer market. 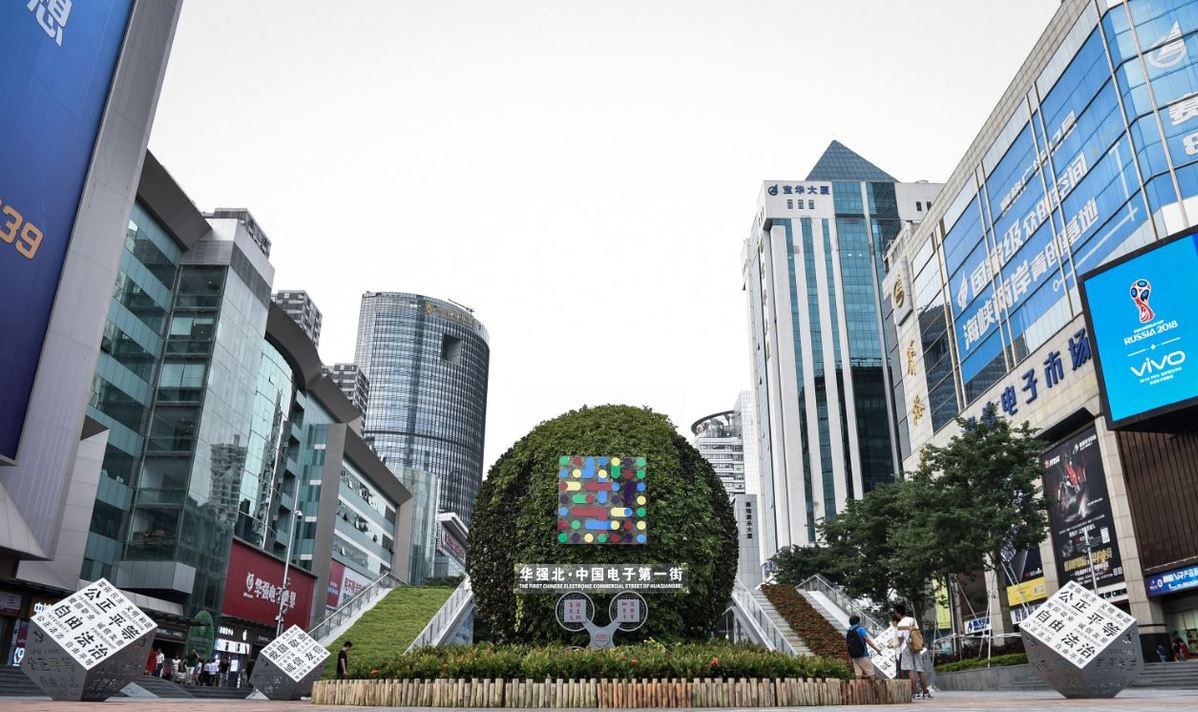 In a small shop on Huaqiang North Street - an area known locally and nationally as a shopping paradise for electronic products - a vendor is surrounded by packaging, but rather than the latest Apple smartphones or bizarre gadgets. It contains something quite different.

Huaqiang North, tucked away in one of the city's most popular commercial enclaves has emerged from a massive four-year face-lift offering cosmetics and skin care products.

Facial masks, creams, lotions and lipsticks have squeezed out handsets, tablets and laptops at five markets along Huaqiang North Street and the transformation is by no means complete.

The change under way in Shenzhen points to the opposite growth trends facing the two industries nationwide. Experts say Huaqiang North is on the right track in its new pursuit of prosperity, but its reputation for shanzhai - counterfeit consumer goods - has overshadowed its development.

Opened in 2005, the complex used to be China's largest trading center for communication devices in terms of scale. But, with the exponential advent of e-commerce and sluggish sales of digital devices, slumping profits forced many tenants to shut up shop.

The downturn spread to other shopping precincts along the street. According to a Shenzhen Evening News report, rents at SEG Electronics Market - one of the district's most popular markets - were reduced four times in 2016.

The dramatic fall forced Ming Tong Commercial City to make an abrupt turn in 2017 to focus on cosmetics following a thorough market investigation and survey. 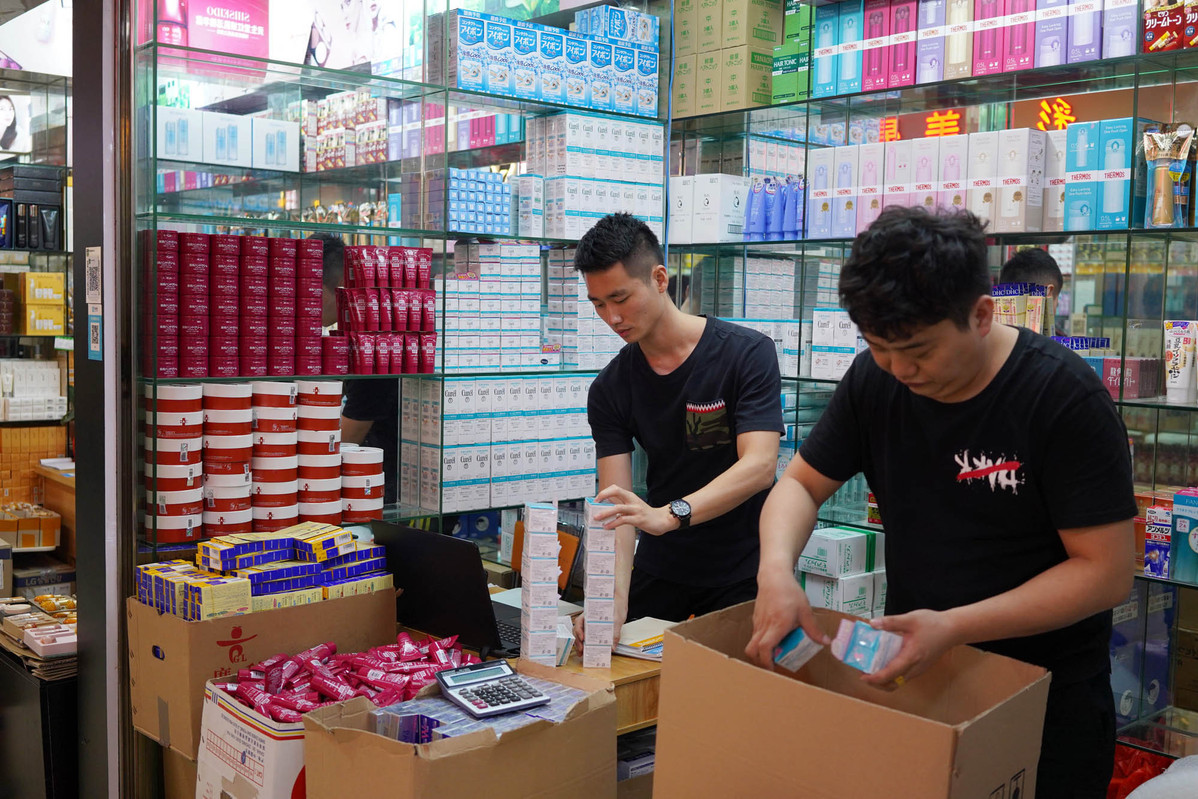 From digital devices to cosmetics

The new approach was initially applied only to the first floor of the building, but it succeeded in attracting so many new tenants that almost the entire marketplace has now shifted to dealing in cosmetics.

Some vendors have set their sights on the most sought-after products, including affordable and brand names, while others concentrate on one segment, such as cotton pads, or products imported from a particular country such as Japan.

The beauty products have found their way to more than a dozen provincial-level regions across the China. Ming Tong says it aims to become the largest collection and distribution center for cosmetics in the country.

The market's delivery system and cross-border trading experience, accumulated from its decades of trading in electronic gadgets, have fueled the success of the transformation.

Several other prominent markets in Shenzhen, such as Manhar Digital Plaza and Yuanwang Digital Mall, have also entered the fray, with advertisements for cosmetics tenants adorning their buildings in place of banners for electronics shopping malls.

Shop rents at Ming Tong have gone up to about 600 yuan ($85) per square meter a month, while those at other markets that have jumped on the bandwagon still stand at about 400 to 500 yuan per square meter.

Former electronics vendors have changed their store names and products, determined not to miss the boat. "I could sell hundreds of boxes (of cosmetics products) every day now," said a vendor surnamed Zheng, who used to sell electronics components at Ming Tong complex, but switched to cosmetics last year.

She has an ace up her sleeve - low prices that are half of those charged by official stores on the mainland, online or offline. A facial mask from Japan, for instance, goes for about 140 yuan on Alibaba's Tmall, but it costs about 80 yuan at Ming Tong - almost the same as in Hong Kong.

"Our products are imported directly from our exclusive suppliers overseas," said Zheng. Her clients are mostly small retailers in third - and fourth-tier cities or online sellers.

Some former electronics sellers have adopted a more conservative approach. A vendor, Xu Zhi, said he could no longer survive focusing on just one sector, so he decided to take on cosmetics as well as electronic devices.

Some customers may question if a computer dealer is able to deal in cosmetics, but Xu said it isn't a problem. "I have my connections after eight years of trading in the market," he said.

His approach is simple. He began offering cosmetics items on his personal WeChat account in addition to digital products, and opened an online cosmetics retail store.

The business model is the same. The quoted prices are relatively transparent although they do fluctuate, and buyers need to pay an extra percentage according to the purchase volume. After receiving an order, his supplier at Ming Tong sends the products directly to his clients.

But, there's still a group of sellers who are sticking to the traditional business. Deng Lipeng, a computer shop owner at SEG Electronics Market, said that, as far as he knows, no shop there has switched to the cosmetics business yet.

But, he said people would trade in whatever they deem to be the most profitable. He tried his luck in cryptocurrency mining machines two years ago, but decided it wasn't for him.

Vendors on Huaqiang North Street are seen as being agile and sensitive to market trends. The cosmetics trade is booming in China, while the handset business has cooled.

According to data from market research firm Canalys, the Chinese mainland's smartphone market contracted by 3 percent in the third quarter of this year compared to a year ago.

In comparison, according to the latest figures from the National Development and Reform Commission, total retail sales of all cosmetics products in China reached 215 billion yuan in the first nine months of this year - up a whopping 12.8 percent from a year ago, the second-fastest speed of growth among all products in the country. At the same time, China imported $6.6 billion worth of cosmetics products - up almost 40 percent.

Huaqiang North Street has also attracted a cluster of comprehensive shopping malls to its fold during its spectacular shift, with their cosmetics departments posting an upsurge in business.

Yang Zhiliang, investment director of chain shopping mall Maoye Commercial Company, said the company's store on Huaqiang North Street is one of its largest in southern China, dealing in about 39 cosmetics brands, and the number is expected to reach 50 next year.

The store has registered a 50-percent growth in sales so far, said Yang, shrugging off competition fears from Ming Tong and other rising distribution centers across the street, explaining they are targeting different segments.

Zhang Yi, chief analyst at consultancy iiMedia Research, applauded the street's transformation. "It could be a new path for Huaqiang North, allowing it to take off again," he said.

With rising living standards in China and consumers of various age groups with a penchant for beauty, demand for cosmetics is reaching a crescendo, especially for foreign brands, he said.

Besides, e-commerce plays a crucial role in cosmetics sales nationwide, and Ming Tong is a key supplier for small - and middle-sized e-retailers. A survey showed that cosmetics items accounted for 45 percent of the entire consumption of goods purchased through cross-border e-commerce, while about three quarters of overall cosmetics retail was conducted online.

But Zhang warned that fake products have surfaced due to high-profit margins, and tough measures to curb smuggling have been taken by customs authorities.

He argued that a brick-and-mortar store can provide some degree of guarantee of product quality. This is also one of the reasons for the success of Huaqiang North Street's transformation.

Nevertheless, he warned that the key is whether managers on Huaqiang North Street could maintain the authenticity of their products in the market.

One media report claimed that although Ming Tong Commercial City has offered assurances that all its products are authentic and pledged to pay compensation 10 times the value of any counterfeit product sold, many stores there have failed to produce official authorization certificates.

As a supplier to many daigous - cross-border personal shoppers who buy products overseas and resell them in China - vendors at Ming Tong go out of their way to provide special delivery services by sending products directly to daigous' clients from Huaqiang North, but alter the consignor address to whatever is required in order to avoid association with the cradle of shanzhai products.

There are also seemingly authentic stores bearing names of well-known chains and it is difficult for customers to distinguish the real ones from the fakes, which is something electronics markets were notorious for in the past.