Olivia Hinerfeld's dog Lincoln and Kate Hilts' cat Potato have something in common: They both like to interrupt Zoom calls as their owners work from home. 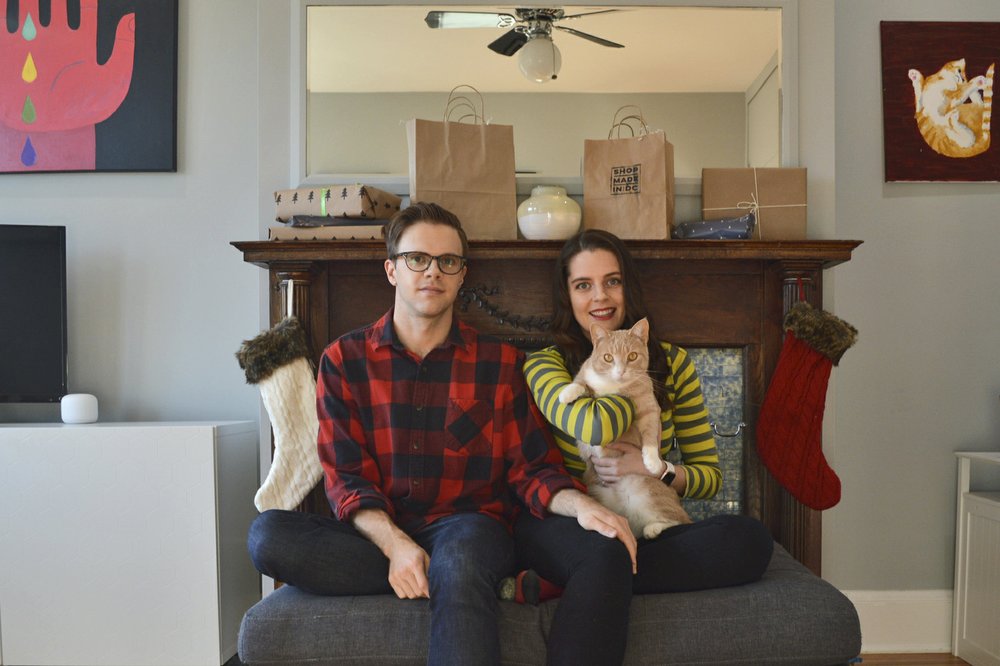 In this photo provided by Kate Hilts, Ross Hettervig, left, and Kate Hilts pose for a photo with their cat, Potato, on Nov. 14, 2020, in Washington. (Photo: AP)

"Sometimes it's better to preemptively put him on your lap so he can fall asleep," says Hilts, a digital consultant in the Washington, D.C., area.

Jealous of the attention that Hinerfeld is paying to her video conference call, Lincoln, a golden retriever, will fetch "the most disgusting" tennis ball he can find from his toy crate to drop into the lap of the Georgetown University Law School student.

For many dogs, this is life as it was meant to be: humans around 24/7, walks and treats on demand, sneaking onto beds at night without resistance. Cats — many of whom, let's be honest, were already socially distancing before humans knew what that was — are more affectionate than ever, some now even acting hungry for attention.

Ten months into quarantines and working from home because of the pandemic, household pets' lives and relationships with humans have in many cases changed, and not always for the better. With this month's U.S. rollout of vaccinations offering hope for normalcy in 2021, long-term impacts aren't known.

"If we think how much time most of our pets prior to the pandemic typically would spend without people, being around us now 24 hours a day, seven days a week, it's quite a lot," Candace Croney, a Purdue University professor who teaches about animal behavior.

While estimates vary on how many pets there are in the United States, there's general agreement that the majority of U.S. households have at least one pet, with dogs, and then cats, far outnumbering other pets such as birds and fish. There also was a surge in pet adoptions this year as stay-at-home restrictions took effect.

For all those tens of millions of dogs and cats, it's been an opportunity to teach humans a thing or two about themselves.

Croney has enjoyed watching how her long-hair cat Bernie and Havanese-mix dog Des play together. She finds herself getting "bookended" by the pair in bed at night.

"I've been learning things that I probably had been missing about how these two interact with each other and have found out that I need to take my cues from them," Croney says. "Which is funny, because I do this for a living and this is the kind of thing we tell other people to do and clearly, I was missing some of it myself."

In the Washington area, Emily Benavides, a U.S. Senate staffer, is learning her cat's language. Humito (Spanish for Smoky), the 3-year-old rescue cat she has had for much of his life, has different-sounding meows to communicate that he wants to eat, wants to nap or has knocked his toy under the refrigerator.

"I think the more time you spend with them, the more you can see them eye to eye," she says. "The pandemic has brought us closer together."

Devika Ranjan, a theater director in Chicago, wanted pandemic company and got a rescue cat she named Aloo during the summer. The formerly feral cat is believed to be around 3 and seems to be very comfortable with a slow-paced, high-attention pandemic life.

"My working from home, I think he loves it," she says. "I think he is just ready to settle down in life. If he were human, he'd probably sit on the couch with a PBR and watch TV all day."

The pandemic hasn't been positive for all pets, though, such as those with owners who are struggling financially.

Veterinarians and owners report some pets are being medicated for anxiety, and others are being put on diets because of too many treats and not enough exercise in parks that humans may be avoiding because of virus concerns.

Hilts says her cat, a rescue who joined their household in March 2019, always seemed to enjoy attention from strangers but now hides from visitors.

Kursten Hedgis, a herbalist in Decatur, Georgia, says her dog Bitsy, also a rescue, misses the attention from other humans on their walks.

"He got really bummed out because no one would talk to him or pet him," she says. "People would walk 6 feet around us. I think he took it personally."

Bitsy, a yorkie, is 14 and has been with her six years after a life as a breeder in a puppy mill. He is blind in one eye and suffers periodic infections and incontinence. Trips to the veterinarian have been "really scary" because of the masks and reduced contacts, Hedgis says.

However, Hedgis and other pet owners say they have become more than companions in recent months — they provide emotional support to their humans.

Humito appears to sense when she is feeling stressed and will take the initiative to cuddle into her lap, says Benavides, spokesperson for Republican U.S. Sen. Rob Portman, of Ohio. "It's a relationship built on mutual care and comfort," Benavides says.

As humans begin to return to work and vaccines roll out, the next year likely will bring a test of those relationships and new habits. Says Ranjan of Aloo: "I hope he will take it in stride."

Croney, the animal behavior professor with some two decades of experience, says she worries what will happen when she returns to work, and not only to her pets.

"I'm starting to worry a little bit for me," she admits. "I'm becoming a little co-dependent of my animals."