CHINA Changing wind sweeps dust back into Beijing; may take 3 days for sand to fully subside

Changing wind sweeps dust back into Beijing; may take 3 days for sand to fully subside 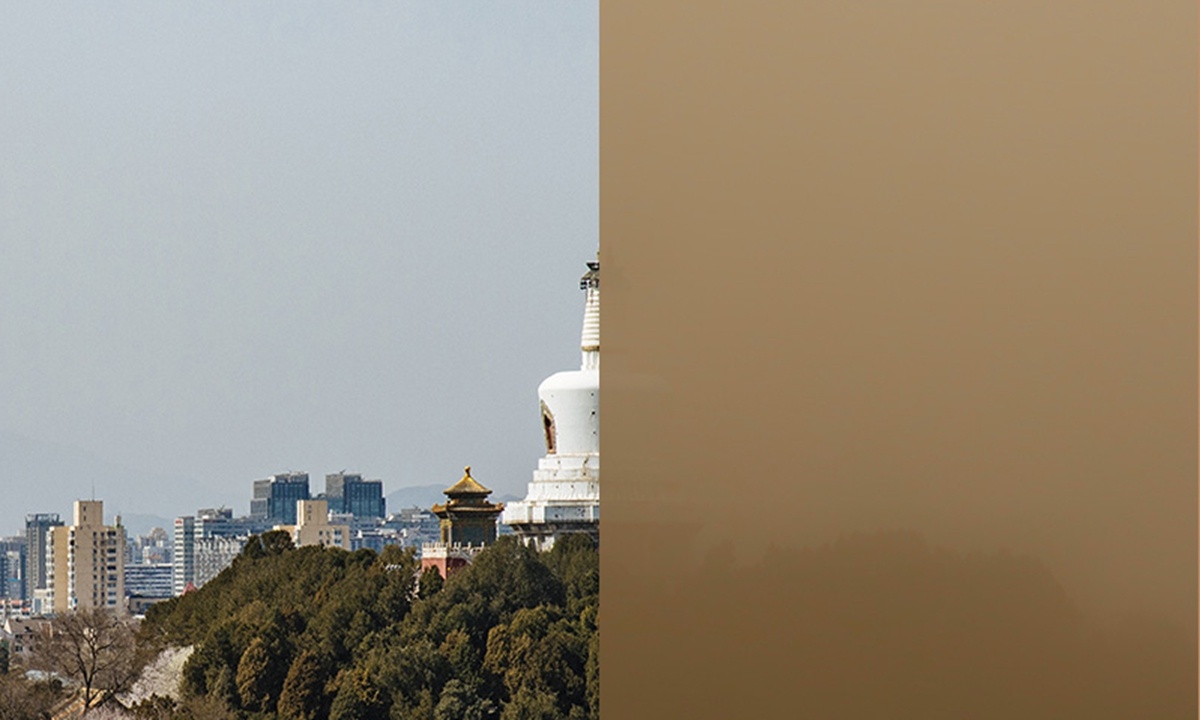 After being enveloped by sand and dust for a whole day on Monday in the largest sandstorm in a decade, Beijing has cleared up and the yellow warning for sandstorms was lifted on Tuesday morning, with the city a picture of blue skies and sunshine. (Photo: Global Times)

After a record-breaking sandstorm on Monday and blue skies on Tuesday, dusky yellow skies returned to Beijing Wednesday morning as a strong south wind swept the dust back into the city, causing air pollution to soar again. The pollution is expected to last until Friday, according to forecasts.

The north wind first blew dust from the north to south, and then a stronger south wind brought the dust back, causing a reflux, experts explained. The sand and dust, which had been expected to flow to southern China, were now less likely to arrive there.

The air quality index (AQI) in Beijing rose to 215 on a scale of 500 as of 6 pm on Wednesday, reaching a serious pollution level, according to the Beijing Municipal Ecological and Environmental Monitoring Center (BJMEMC).

The primary pollutant in the air is PM10. Children, the elderly and patients with heart or lung diseases are advised to stay indoors, and the general population should reduce outdoor exercise, the city said.

On Monday morning, the capital city was engulfed by the largest sandstorm in a decade, which originated in Mongolia. Previous forecasts said that the sand and dust would gradually move southward and possibly affect Central China and the Yangtze River Delta region.

But the sand and dust, which just left the city on Tuesday, returned from the southwest in the afternoon, causing a sharp increase in the PM10 concentration in Beijing, the BJMEMC said on Wednesday morning.

Wang Gengchen, a research fellow at the Institute of Atmospheric Physics of the Chinese Academy of Science, told the Global Times the dust and sand was blown back to the north by a south wind before they could fall down during the movement from north to south.

Conditions in Beijing are expected to improve over the weekend, Wang said. He explained that the dust and sand in the air, which weakened during the back-and-forth transport, will slowly settle and disperse, a process that will last about two or three days.

"We're still going to see some north wind in the coming days, but it will not be as strong as we've seen in the past couple of days, so it is less likely that the dust and sand will end up in southern China," Wang added.

The strong sandstorm on Monday made its way through 12 provinces in northern China. Due to the large amount of dust and the influence of dust retention and reflux, the PM10 concentration remained high in many northern provinces, the China National Environmental Monitoring Centre (CNEMC) said on Wednesday.

The situation is expected to turn better on Friday as a new round of strong cold air sweeps the northern part of China from northwest to southeast, and rain falls in some areas.

But the CNEMC also warned of the possibility of a new round of dusty conditions.