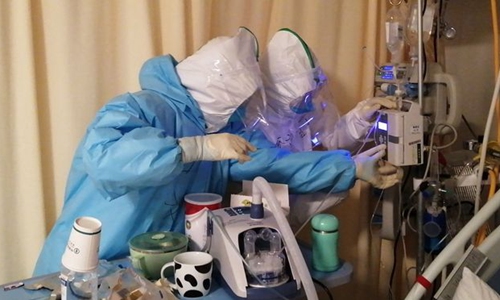 In the face of the resolute battle against the deadly novel coronavirus outbreak, many internet platforms have launched a special channel in real time to dispel rumors which triggered irrational behavior by some Chinese internet users.

The People's Daily, tech giant Baidu, Chinese mobile healthcare app Dingxiang Doctor and government authorities have opened  online channels to dispel rumors to help the public identify if circulating gossip is true or fake in real time. The tool developed by the People's Daily had countered 140 rumors as of press time.

In an extreme case, fatuous rumors claiming Corona beer as a medium of this virus resulted in some netizens asking for refunds from the beer company on Twitter.

The Pudong district government of Shanghai clarified late Saturday  on its Sina Weibo account that the report a resident in Pudong set fire to his house by spraying alcohol to disinfect the house as pneumonia spreads while his wife was cooking was fake.

On Baidu App, a rumor that basking outside can kill the virus has been proved fake. Another rumor that blowing hands and face with a hairdryer can disinfect was identified fake on Dingxiang Doctor.

A report by the Xinhua News Agency on Friday night claimed Chinese patent medicine, Shuanghuanglian oral liquid, is effective in containing the novel coronavirus infection. People rushed to purchase the medicine online and offline, resulting in it flying off the shelves.

The People's Daily published a report on Saturday, urging people not to rush to purchase Shuanghuanglian oral liquid, as there is no specific anti-viral treatment recommended against coronavirus infection so far. Research for treatment measures is still ongoing but Shuanghuanglian is yet to pass clinical trials.

Some analysts suggested rumors and the subsequent panic are more dangerous than the epidemic itself as disinformation often strikes an emotional chord and people are vulnerable to incorrect judgments at such critical times.

People are more likely to make up rumors when challenged by the public health emergency as they were driven by an excessive psychological stress reaction and death anxiety, Wang Jikun, an associate professor of psychology of East China Normal University in Shanghai, told the Global Times on Sunday.

In the digital age, internet users can spread rumors easily, quickly and widely, "causing anxiety to ripple through the masses," Wang said.

People, "especially senior residents" tend to have irrational and psychological fears about death, Wang said, noting that when such an emergency comes, they were more likely to have death anxiety.

The anxiety is also often based on a "herd mentality," which encourages the public to blindly follow rumors, Wang noted.

"Calm down and give a second thought when it comes to believing different information online," a Beijing resident Simon told the Global Times.

"The first thing I have been doing every day is rebutting rumors in various family WeChat groups, as middle-aged and elderly groups are more likely to believe in online rumors," he said.